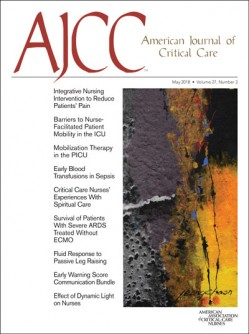 Newswise — The unplanned transfer of medical-surgical patients to the intensive care unit (ICU) and ICU admissions of patients after a rapid response team call declined significantly when a New Hampshire hospital implemented a new communication bundle.

The initial results from the hospital’s pilot study are published in the May 2018 issue of American Journal of Critical Care (AJCC).

The hospital embedded a seven-item modified early-warning score system into the electronic medical record (EMR) for patients in its four medical-surgical units and its ICU. Possible scores ranged from 0 to 21 on the scale, and scores higher than 4 automatically activated a red exclamation point next to the patient’s name on the EMR, which was visible to the nurse and unit secretary.

Early-warning scores are becoming more common in hospitals, but as part of the communication bundle, the score also triggered an electronic page to an experienced critical care nurse preassigned to respond to rapid response team (RRT) calls. The ICU nurse then reviewed the patient’s EMR and consulted with the patient’s nurse by phone to discuss the score and develop a plan.

The early-warning score also triggered a reassessment of at least one item on the early-warning scale by the patient’s nurse. The combination of the consultation and the reassessment may initiate other actions, such as notifying a provider, administering as-needed medications or following established protocols for interventions.

“The early-warning score helps identify patients with clinical signs of deterioration, but that information must be quickly communicated to a nurse with an appreciation for the urgency of the situation and the knowledge to take action,” said primary investigator Cheryl Gagne, RN, DNP, CNEA, chief nursing officer at the hospital. “Our communication bundle may have led to earlier and more effective interventions by medical-surgical nurses, facilitated by collaboration with experienced critical care nurses.”

The researchers also found that adding the communication bundle led to a significant decrease in response time to the early-warning score alert on the EMR.

Among the other findings, RRT calls for patients with early-warning scores greater than 4 declined, while overall RRT calls increased insignificantly, suggesting that the bundle prompted intervention before a patient’s score increased.

The researchers collected data for three months prior to implementation and for 18 months afterward.

About the American Journal of Critical Care: The American Journal of Critical Care (AJCC), a bimonthly scientific journal published by the American Association of Critical-Care Nurses, provides leading-edge clinical research that focuses on evidence-based-practice applications. Established in 1992, the award-winning journal includes clinical and research studies, case reports, editorials and commentaries. AJCC enjoys a circulation of more than 110,000 acute and critical care nurses and can be accessed at www.ajcconline.org.

American Journal of Critical Care, May-2018