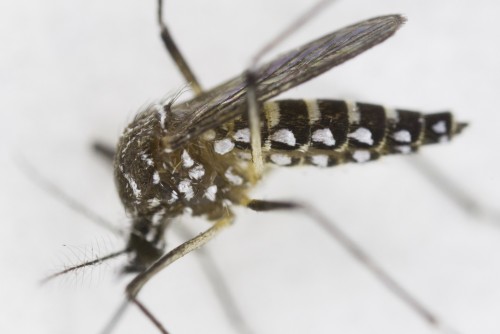 People can get sick from chikungunya after an infected mosquito of the species Aedes aegypti, seen here, or Aedes albopictus bites them. Both these mosquito species carry Zika and dengue viruses.

Newswise — GAINESVILLE, Fla. --- University of Florida scientists are starting to better understand the ability of two Florida mosquito species to transmit two strains of chikungunya virus that have caused outbreaks of human disease around the world. The virus causes chikungunya fever – a painful condition whose symptoms include joint pain and swelling, headache, muscle pain or rash and in some instances, chronic rheumatoid arthritis that last for months to years.

Researchers want to evaluate the ability of Florida mosquitoes to transmit chikungunya because the virus was transmitted in Florida as part of an outbreak throughout the Americas in 2014.

Researchers used a baseline comparison of infection and transmission rates of Florida mosquitoes to those from the Dominican Republic, a region associated with numerous human cases.

Barry Alto, an associate professor of entomology at the UF Institute of Food and Agricultural Sciences, led a team of UF/IFAS researchers that measured mosquito infection and transmission of the emergent strains of chikungunya -- Asian and Indian Ocean – in Aedes aegypti and Aedes albopictus mosquitoes. The mosquitoes originated in Alachua, Indian River, Manatee, Monroe and St. Lucie counties in Florida. They also measured baseline infection rates of Aedes aegypti from the Dominican Republic.

Scientists confirmed the first case of chikungunya in Florida in 2014. Between 2014 and 2016, more than 3,800 imported human cases of chikungunya fever in Florida highlighted the risk of contracting the illness, according to the new UF/IFAS study.

“Transmission of chikungunya virus in the U.S. is a major public health concern,” said Alto, a faculty member at the UF/IFAS Florida Medical Entomology Laboratory in Vero Beach, Florida. “These are emergent strains that are associated with expanding geographic range, and an increase in the number of human cases.”

People can get sick from chikungunya after an infected mosquito of the species Aedes aegypti or Aedes albopictus bites them. Both these mosquito species carry Zika and dengue viruses.

The Indian Ocean strain of chikungunya virus caused an outbreak in the Indian Ocean region with an estimated 1.5 million human cases from 2004 to 2006, Alto said. Scientists first detected the Asian lineage in 2013 on the island of St. Martin, in the Caribbean, and subsequently spread throughout the Americas.

Alto views the new findings as useful measurements that can be used in risk assessment by scientists as they model chikungunya transmission. It also serves as a cautionary tale for the public about another mosquito-borne illness and ways to protect people against it, because there is no vaccine for it. Researchers recommend wearing protective clothing if you are outdoors, removing containers of standing water and wearing insect repellant, preferably with DEET.

The study is published in the journal PLOS Neglected Tropical Diseases.