Large lecture courses notoriously discourage students from going into the sciences, but an innovative physics course helps to prevent this first-year slide 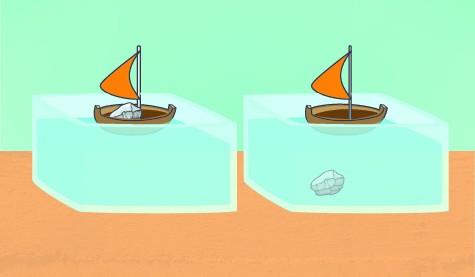 If a stone aboard a boat is dropped in the water, does the level of the water rise, sink or stay the same? An innovative physics course at Washington University coaxes students to reason their way through problems like this one instead of memorizing the answers. (See the end of associated article to verify your answer.)

Queries like this make people who love teaching science cringe. It’s not that they think the students are “cheating” by trying to Google the answer, but rather that they know students who ask this kind of question are learning nothing — and probably confirming a secret conviction that they’re bad at science.

That attitude is one of the toughest obstacles science teachers face. It gathers speed in high school, when students often are defined as smart if they get the right answer quickly — by any means possible. In many cases, an introductory college science class is the last chance educators have to fix the perception that getting the answer is everything. Unfortunately, these are often large lecture classes that, research shows, drive steep attitudinal declines toward learning and problem solving in the sciences.

A three-year evaluation of an innovative Washington University in St. Louis course suggests the attitudinal decline is not inevitable. Offered by the Department of Physics in Arts & Sciences, “Active Physics” incorporates active-learning techniques, but still is taught to large classes.

The results, published in the July 2 issue of Physical Review Special Topics, show that the course has the expected benefits in conceptual learning and retains some, although not all, of the attitudinal benefits of small, inquiry-based courses.

“What’s more, ‘Active Physics’ eliminates what is typically a big gender gap in attitudinal declines in traditional introductory physics courses,” said Frey, who also is executive director of the university’s Teaching Center and associate professor of chemistry in Arts & Sciences. “Women’s attitudinal scores still decline in ‘Active Physics,’ but much less than they do in traditional lecture courses.”

The bottom line is that active learning works for large classes, Frey said. “People like to say, ‘Well, of course you can implement active learning if you have classes of 40 or 50 or with a specific instructor,’” she said. “But they’re skeptical that it will work in larger classes. What the evaluation showed is that the gains hold in large classes taught by many instructors over a number of years — if the curriculum is implemented properly.”

Getting students off the mental couchTom Bernatowicz, PhD, professor of physics, first introduced the “Active Physics” curriculum to a large introductory class in 2004. Over the next 10 years, other physics faculty began to teach the course to equally large classes, and it gradually displaced the sections of the lecture-based introductory course.

“Active Physics,” a course based on the textbook “Six Ideas That Shaped Physics” by Thomas A. Moore of Pomona College, has its roots in the 1980s. That’s when educators, dissatisfied with lecture courses, became interested in models of instruction that require students to take more responsibility for their own learning. Or, as Moore writes, “Physics is not a collection of facts to absorb, but rather a set of thinking skills requiring practice to master.”

Every aspect of “Active Physics” is designed to nudge students to be more engaged in learning and to think more and memorize less. For example, both “Active Physics” and the lecture sections of introductory physics courses include a demonstration of Archimedes’ principle (see illustration at top).

Students in “Active Physics” discuss what they think will happen before the demonstration, make a prediction and explain their reasoning to the class. Only once they have a stake in the outcome is the demonstration run. In the traditional lecture class, the instructor performs the demonstration without preamble, explaining the result.

“Active Physics” homework, revisions and in-class problems are similarly designed to nudge students to dig into the physics instead of letting it wash over them and to encourage them to try exploratory rather than rote learning. (For more about this course, see “Physics according to Bernatowicz.”)

Losing the attitudeIt seemed successful, but nobody knew for sure whether “Active Physics” was actually achieving the benefits of inquiry or active learning courses taught to much smaller classes.

But there was an opportunity to find out. The Office of the Provost had recently funded the Center for Integrative Research on Cognition, Learning and Education (CIRCLE). Co-directors Frey and Mark A. McDaniel, PhD, professor of psychology in Arts & Sciences, teamed up with physics lecturer K. Mairin Hynes, PhD, and other faculty to evaluate the program. This study compared the outcomes of students enrolled in “Active Physics” and the equivalent traditional lecture course for three consecutive academic years, from 2009-2012.

To assess how the courses changed attitudes, all of the students completed the Colorado Learning Attitudes About Science Survey (CLASS), a 42-item questionnaire that asks students to agree or disagree with statements about their attitudes toward physics and learning about physics.

Students were asked, for example, whether they agreed or disagreed with the following CLASS statement:

“I do not spend more than five minutes stuck on a physics problem before giving up and seeking help from someone else.”

“This statement is included because many students coming out of high school believe that physics, and to some extent chemistry, is all math, and they have learned to do the problems by rote,” Frey said. “That is, if the problem is very similar to ones they’ve seen before, they can use the procedure they’ve learned.

“But if it is superficially different, they can’t see the underlying concept, and therefore cannot solve it,” she said. “Because they think they should be able to look at a problem and solve it right away, they get frustrated.”

Another CLASS statement that is equally revealing:

“In doing a physics problem, if my calculation gives a result very different from what I’d expect, I’d trust the calculation rather than going back through the problem.”

“Some students are naturally active learners,” she said, “but many are not. So it is our job to teach them how to teach themselves rather than just passively waiting to be taught.

“If we want graduates who can really problem-solve, innovate, be creative and lead, we have to teach students to be active learners. It’s that active learning and complex problem solving we’re trying to bring back into introductory courses using techniques such as ‘Active Physics,’” Frey said.

Education Back to School Cognition and Learning All Journal News Physics