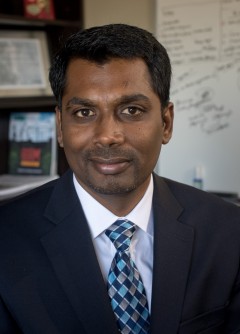 University of Alabama at Birmingham researchers have preliminary data, with cultured cells or diabetic hearts, that diabetes impairs this removal of dead heart-muscle cells. They believe this impairment may be the reason diabetes increases the risk for cardiovascular disease, including heart failure.

Aided by a new, four-year, $2.64 million grant from the National Institutes of Health, Prasanna Krishnamurthy, DVM, Ph.D., and Jianyi “Jay” Zhang, M.D., Ph.D., both investigators in the UAB Department of Biomedical Engineering, will study whether mesenchymal stem cells or their exosomes can boost dead cell removal and also reduce damaging inflammation after heart attacks in animal models of diabetes.

The removal of dead cells by macrophages or other scavenger cells is called efferocytosis, which sometimes is referred to as “the burying of dead cells.”

Exosomes are small blebs or tiny vesicles released by human or animal cells. One role of exosomes, which contain proteins and RNA from the cell that releases them, is communicating among cells.

Krishnamurthy and Zhang hypothesize that exosomes from mesenchymal stem cells are enriched with factors that promote removal of dead cells by macrophage cells. They further hypothesize that delivery of exosomes derived from mesenchymal stem cells to the injured heart will enhance removal of dead cells and improve healing of the heart attack wound, thus aiding efficient regeneration and repair of heart tissue and preventing further damage.

They will test this in murine and porcine models of heart disease.

Mesenchymal stem cells have the ability to differentiate into multiple cell types, including heart cells, bone cells, cartilage cells and fat cells. These stem cells have been tested clinically for more than a decade to treat problems like tissue injury, immune disorders or heart failure. However, the effect of mesenchymal stem cells or their exosomes on macrophage efferocytosis of dying heart-muscle cells — in animal models with or without diabetes — has not been studied, Krishnamurthy and Zhang say.

Broader implications of their work, if successful, could have therapeutic use in other pathophysiologies like allergic and chronic inflammation, tissue repair, sepsis, atherosclerosis, stroke, obesity, rheumatoid arthritis, and cancer, where efferocytosis plays a critical role.