Can We Perceive Gender from Children's Voices?

Can We Perceive Gender from Children's Voices? 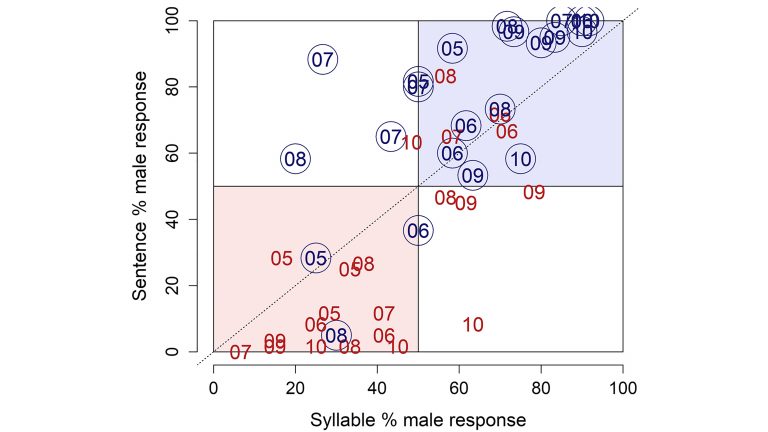 Classification rates for individual talkers (ages 5-11), with numbers indicating talker age (males in circles). Voices in shaded quadrants were identified correctly based on both sentences and isolated syllables.

Newswise — WASHINGTON, November 23, 2021 -- The perception of gender in children's voices is of special interest to researchers, because voices of young boys and girls are very similar before the age of puberty. Adult male and female voices are often quite different acoustically, making gender identification fairly easy.

In the Journal of the Acoustical Society of America, published by the Acoustical Society of America through AIP Publishing, researchers at the University of California, Davis and the University of Texas at Dallas report developing a database of speech samples from children ages 5 to 18 to explore two questions: What types of changes occur in children's voices as they become adults, and how do listeners adjust to the enormous variability in acoustic patterns across speakers?

Listeners assess a speaker's gender, age, height, and other physical characteristics based primarily on the speaker's voice pitch and on the resonance (formant frequencies) of their voice.

"Resonance is related to speaker height -- think violin versus cello -- and is a reliable indicator of overall body size," said Santiago Barreda, from the University of California, Davis. "Apart from these basic cues, there are other more subtle cues related to behavior and the way a person 'chooses' to speak, rather than strictly depending on the speaker's anatomy."

When Barreda and Peter Assmann, from the University of Texas at Dallas, presented listeners with both syllables and sentences from different speakers, gender identification improved for sentences. They said this supports the stylistic elements of speech that highlight gender differences and come across better in sentences.

They made two other important findings. First, listeners can reliably identify the gender of individual children as young as 5.

Their work suggests "perception of gender can depend on subtle cues based on behavior and not anatomy," said Barreda. "In other words, gender information in speech can be largely based on performance rather than on physical differences between male and female speakers. If gendered speech followed necessarily from speaker anatomy, there would be no basis to reliably identify the gender of little girls and boys."

The performative nature of gender has long been argued on theoretical grounds, and these experimental results support this perspective.

The Journal of the Acoustical Society of America (JASA) is published on behalf of the Acoustical Society of America. Since 1929, the journal has been the leading source of theoretical and experimental research results in the broad interdisciplinary subject of sound. JASA serves physical scientists, life scientists, engineers, psychologists, physiologists, architects, musicians, and speech communication specialists. See https://asa.scitation.org/journal/jas.

Journal Link: Journal of the Acoustical Society of America