Can You Hear Me Now?

See the bats chirping louder to overcome background noise and detect their prey. 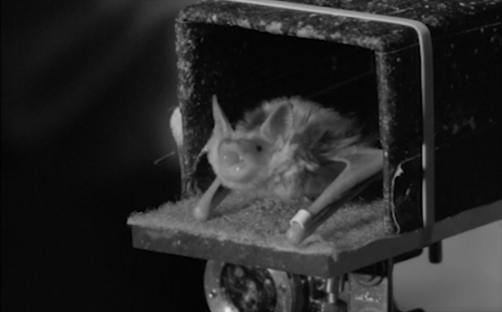 A bat from the experiment stands on a platform awaiting delivery of its prey.

Can You Hear Me Now?
Astonishingly Speedy Brain Mechanism Helps Bats Get Louder When Necessary

Newswise — When trying to be heard over noise, humans and animals raise their voices. It’s a split-second feat, from ear to brain to vocalization, and Johns Hopkins University researchers are the first to measure just how fast it happens in bats: 30 milliseconds. That’s just a tenth of the time it takes to blink an eye, and a record for audio-vocal response.

Because this action, known as the Lombard effect, happens so very fast, the researchers were also able to solve a longtime mystery regarding the neural mechanism behind it. In a paper published online this week by the journal Proceedings of the National Academy of Sciences, they conclude it must be a fundamental temporal reflex rather than, as previously thought, a deeper cognitive behavior that would take more processing time. The findings, which shed light on the underpinnings of human speech control, also reveal how species as diverse as fish, frogs, animals and people share the ability to be heard over the fray.

“Scientists have been wondering for a century: Could there be a common auditory process to explain how this phenomenon happens in fish to frogs to birds to humans, species with wildly different hearing systems?” said co-author Ninad Kothari, a Johns Hopkins graduate student in psychological and brain sciences. “We resolved this question.”

The new information could lead to better treatment for diseases where the Lombard effect can be amplified, such as Parkinson’s disease, and could also help to build assistive medical devices.

The researchers studied bats, which rely on sonar-like echolocation — emitting sounds and listening for echoes — to detect, track, and catch prey. Unlike humans, whose vocalizations are comparatively long and slow, bats are ideal for such a sensorimotor study. Their high-frequency chirps, undetectable to the human ear, are quick and precise, allowing researchers to test the limits of a mammalian brain.

The team trained big brown bats to remain perched on a platform while tracking insects moving towards them on a tether. While the bat hunted the insect, the researchers recorded the bat’s vocalizations with an array of 14 microphones. Sometimes the researchers allowed the bat to hunt in silence, other times they played bursts of interfering white noise, at varying intensities, from a speaker positioned in front of the bat.

The white noise interfered with the bat’s echolocation and caused the bat to emit louder and louder chirps, not unlike someone trying to be heard, first over a loud radio, then over the clamor of a lawn mower and then over the blare of a passing fire engine. When the noise stopped, the bat would stop shouting, so to speak, and vocalize at a more typical level.

The researchers, who were able to create a computational model for the Lombard effect that applies to all vertebrates, concluded that the brain of a bat, or a person, or a fish, constantly monitors background noise and adjusts the vocal level as necessary.

This entire elaborate process happens in just 30 milliseconds, the authors found. Even in terms of near-instantaneous brain reactions, they call this reflex “remarkably short.”

“Typically, we breathe every three to five seconds, our heart beats once per second, and eye blinking takes one third of a second. If we believe that eye blinking is fast, the speed at which an echolocating bat responds to ambient noise is truly shocking: 10 times faster than we blink our eyes,” said lead author Jinhong Luo, a Johns Hopkins postdoctoral fellow.

“Our study features echolocating bats as valuable animal models for understanding connections between hearing and vocalizations, including speech control in humans,” said Cynthia Moss, a Johns Hopkins professor of psychological and brain sciences and of neuroscience and a co-author.