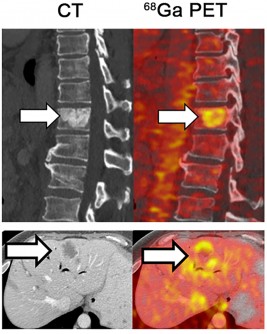 PET imaging (right) shows the accumulation of iron in metastatic tumors growing in the spine and liver of patients with pancreatic ductal adenocarcinoma.

Newswise — Researchers at the University of California, San Francisco (UCSF), have discovered that cells carrying the most common mutation found in human cancer accumulate large amounts of ferrous iron and that this “ferroaddiction” can be exploited to specifically deliver powerful anticancer drugs without harming normal, healthy cells. The therapeutic strategy, described in a study to be published March 9 in the Journal of Experimental Medicine (JEM), could be used to treat a wide variety of cancers driven by mutations in the KRAS gene.

Mutations in KRAS are found in many cancers and are particularly common in pancreatic ductal adenocarcinoma (PDA), colorectal cancer, acute myeloid leukemia, and lung adenocarcinoma. In total, KRAS mutations are thought to cause a quarter of all cancer deaths by activating cell signaling pathways that drive cell proliferation and enhance cell survival. These signaling pathways can be blocked by drugs that inhibit some of the proteins activated by KRAS, but, in addition to killing cancer cells, these drugs are highly toxic to healthy cells and tissues, limiting their use at doses needed to inhibit signaling in cancer cells.

“For example, inhibitors of the MEK1/2 enzymes have shown clinical benefit, but the approach suffers from dose-limiting toxicities in the eye, skin, gut, and other organs,” explains Eric A. Collisson, MD, a professor in the Department of Medicine at UCSF. “Clinical experience has shown that sustainable dosing of these inhibitors is often well below FDA-approved dose, severely hampering the dose intensity achievable in the tumor cell and ultimately limiting clinical efficacy.”

In the new JEM study, first author Honglin Jiang and colleagues develop a method to target MEK inhibitors, and potentially other anticancer agents, to KRAS-driven tumors without harming other, healthy tissues in the body.

The researchers discovered that a wide variety of KRAS-driven tumors show increased activity of genes involved in iron uptake and metabolism, and, in PDA, this increase in gene activity correlated with shorter survival times. PET scans of PDA patients showed that their tumors accumulated high levels of iron. Jiang and colleagues wondered whether this addiction to iron might provide a way to target these cancer cells more precisely.

“We found that the elevated levels of iron, particularly in its ferrous, Fe2+ oxidation state, are driven by oncogenic KRAS, so we hypothesized that mutant KRAS-driven PDA tumor cells might be selectively targeted with a ferrous iron–activatable drug conjugate (FeADC),” explains Adam R. Renslo, a professor in the Department of Pharmaceutical Chemistry at UCSF who led the study.

FeADCs are inactive versions of drugs that break apart in the presence of Fe2+, releasing the drug’s active version. The approach was inspired by anti-malarial drugs like artemisinin that target Fe2+ in the parasite as it invades red blood cells and degrades hemoglobin, producing large amounts of free heme iron.

Renslo and the team synthesized an FeADC version of the FDA-approved MEK inhibitor cobimetinib. Laboratory tests showed that this drug conjugate, named TRX-cobimetinib, had little effect on human skin or retinal cells but was activated inside KRAS mutant cancer cells, inhibiting the KRAS–MEK signaling pathway and blocking cell growth.

“In this study, we describe a therapeutic strategy that enables more tolerable and efficacious combination therapies targeting the signaling pathways in KRAS-driven tumors,” Collisson says. “The discovery of pharmacologically exploitable ferroaddiction in KRAS-driven cancers holds promise to improve the treatment of deadly cancers through a practicable and generalizable approach to FeADC design, development, and clinical testing.”

About Journal of Experimental Medicine

Journal of Experimental Medicine (JEM) publishes peer-reviewed research on immunology, cancer biology, stem cell biology, microbial pathogenesis, vascular biology, and neurobiology. All editorial decisions on research manuscripts are made through collaborative consultation between professional scientific editors and the academic editorial board. Established in 1896, JEM is published by Rockefeller University Press, a department of The Rockefeller University in New York. For more information, visit jem.org.