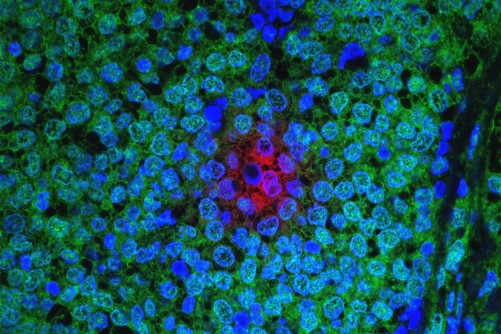 In this image of a human breast tumor, a cluster of malignant cells that have become resistant to chemotherapy are shown in red.

Researchers at University of California San Diego School of Medicine report that cancer cells appear to communicate to other cancer cells, activating an internal mechanism that boosts resistance to common chemotherapies and promotes tumor survival.

The findings are published online in the June 6 issue of Science Signaling.

Six years ago, Maurizio Zanetti, MD, professor in the Department of Medicine at UC San Diego School of Medicine and a tumor immunologist at Moores Cancer Center at UC San Diego Health, published a paper in PNAS suggesting that cancer cells exploit an internal mechanism used by stressed mammalian cells, called the unfolded protein response (UPR), to communicate with immune cells, notably cells derived from the bone marrow, imparting them with pro-tumorigenic characteristics.

The UPR is activated in response to unfolded or misfolded proteins accumulating in the endoplasmic reticulum (ER) — an organelle that carries out several metabolic functions in the cells and the site where proteins are built, folded and sent for secretion. The UPR can often decide cell death or survival.

“We noticed that TERS-experienced cells survived better than their unexperienced counterparts when nutrient-starved or treated with common chemotherapies like bortezomib or paclitaxel,” said Jeffrey J. Rodvold, a member of Zanetti’s lab and first author of the study. “In each instance, receiving stress signals caused cells to survive better. Understanding how cellular fitness is gained within the tumor microenvironment is key to understand cooperativity among cancer cells as a way to collective resilience to nutrient starvation and therapies.”

When cancer cells subject to TERS were implanted in mice, they produced faster growing tumors.

“Our data demonstrate that transmissible ER stress is a mechanism of intercellular communication,” said Zanetti. “We know that tumor cells live in difficult environments, exposed to nutrient deprivation and lack of oxygen, which in principle should restrict tumor growth. Through stress transmission, tumor cells help neighboring tumor cells to cope with these adverse conditions and eventually survive and acquire growth advantages.”

Importantly, he said the research may explain previous findings by other groups showing that individual tumor cells within a uniform genetic lineage can acquire functionally different behaviors in vivo. In other words, some cells acquire greater fitness and extended survival — another way to generate intra-tumor heterogeneity, which currently represents one of the major obstacles to cancer treatment. This implies that mutations peppered throughout the cancer genome of an individual are not the only source of intra-tumor heterogeneity.

Zanetti said researchers and physicians need to consider these changing cellular dynamics in the tumor microenvironment in developing both a better understanding of cancer and more effective treatments.