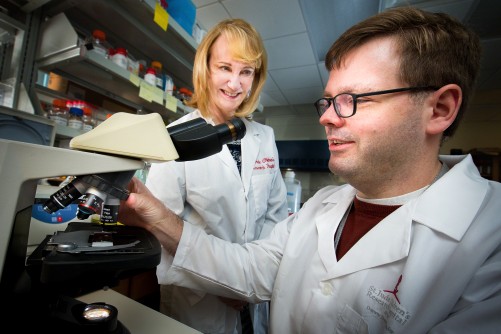 The findings have profound implications for current treatment and vaccine strategies to combat the pneumococcus bacterium, or Streptococcus pneumoniae. Pneumococcus is a leading killer of children worldwide. The bacteria are responsible for a wide range of infections, including pneumonia, bacteremia, meningitis and otitis media.

The results also suggest bacteria are pre-programmed to rapidly add or remove capsules as needed to avoid detection and destruction by different branches of the disease-fighting immune system.

Researchers showed that the suicide enzyme LytA promotes the bacteria’s survival early in the infection by helping pneumococcus rapidly shed its capsule. Removing the capsule helps bacteria evade the antimicrobial peptides produced by epithelial tissue in the lungs as part of the innate immune response. Removing the bacterial capsule also sets the stage for more invasive infections by making it easier for pneumococci to invade epithelial cells and move into the blood. In the blood, bacteria again produce capsules to protect against the adaptive immune response.

“The majority of antibacterial vaccines currently target the capsule to trigger the protective immune response,” said senior author Elaine Tuomanen, M.D., chair of the St. Jude Department of Infectious Diseases. “The finding in this study that one of the major roles of LytA is to drive capsule shedding helps to explain why current pneumococcal vaccines are less effective at preventing pneumonia and ear infections, diseases of epithelial tissue where the pneumococcus has less capsule.

“The findings reinforce the importance of ongoing efforts to develop pneumococcal vaccines that target bacterial proteins rather than the capsule,” she said. The results also help to settle the mystery of why bacteria retain LytA, a suicide enzyme that, when activated by antibiotics, kills pneumococci by removing pieces of the cell wall until the bacteria explode. The capsule is attached to the cell wall.

Working in the laboratory, researchers showed for the first time that pneumococci responded to antimicrobial peptides secreted by epithelial cells by activating LytA, which leads to capsule removal but not bacterial death. In fact, pneumococci that lacked functional LytA remained encapsulated, more vulnerable to antimicrobial peptides and more likely to die within hours of the infection.

“This study reveals LytA to function as a Trojan horse, promoting survival of pneumococcus early in the infection by clipping off pieces of the cell wall that bear the capsule, but causing the bacteria’s destruction when activated by antibiotics,” said first and corresponding author Colin Kietzman, Ph.D., a postdoctoral fellow in Tuomanen’s laboratory. “Evidence suggests that, unlike antibiotics, the activation of LytA by molecules of the innate immune response is not fatal and is most likely actively controlled or reversible.”

Investigators also demonstrated that capsule shedding and the antibiotic-induced bacterial death were separate processes carried out by LytA enzymes in different regions of pneumococcus.

Working in a mouse model of pneumococcal pneumonia, researchers reported that LytA and antimicrobial peptides both contributed to capsule removal. Using a fluorescent microscopic technique they developed, investigators showed that loss of either LytA or the antimicrobial peptide was associated with a significant reduction in capsule shedding during the first three hours of bacterial lung infections. The scientists also linked capsule shedding to as much as an eight-fold increase in the bacteria’s ability to invade human lung epithelial cells, which lays the groundwork for invasive disease.

Researchers are working to learn more about the LytA pathway involved in capsule shedding. “The pathway is new to microbiology and may provide clues for designing drugs to prevent invasive disease by blocking pneumococcus from entering the blood stream and causing more systemic infections,” Tuomanen said.

The other authors are Geli Gao and Beth Mann, both of St. Jude; and Lance Myers, formerly of St. Jude.

The research was supported in part by grants (AI27913) from the National Institutes of Health and ALSAC.