Capturing and Converting Carbon Dioxide into a Useful Product 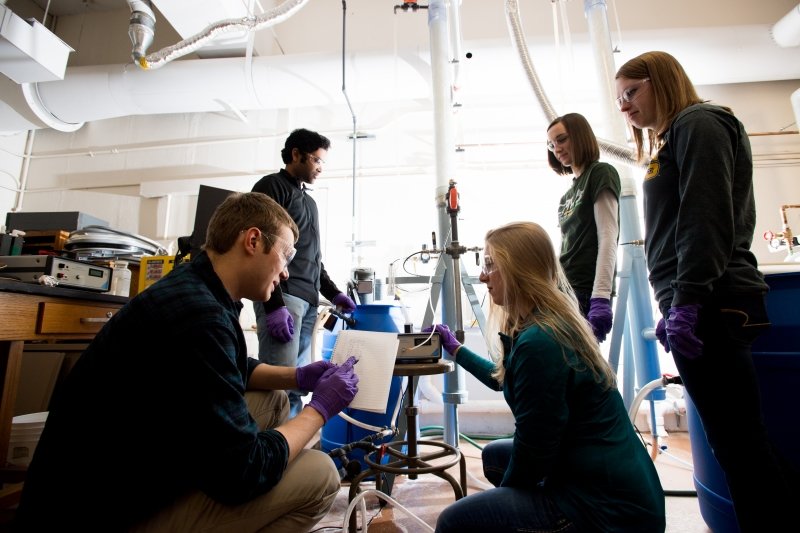 Newswise — Until now, carbon dioxide has been dumped in oceans or buried underground. Industry has been reluctant to implement carbon dioxide scrubbers in facilities due to cost and footprint.

What if we could not only capture carbon dioxide, but convert it into something useful? S. Komar Kawatra and his students have tackled that challenge, and they’re having some success.

A team lead by Kawatra, a professor of chemical engineering at Michigan Technological University, his PhD students, Sriram Valluri and Victor Claremboux, and undergraduate Sam Root, have designed a carbon dioxide scrubber. They are working on converting the carbon dioxide that they capture into oxalic acid, a naturally occurring chemical in many foods.

Root and Valluri have been invited to present their research at the Society of Mining, Metallurgy and Exploration’s annual meeting in Denver in February.

How a Carbon Dioxide Scrubber Works

The group installed their carbon dioxide scrubber at the Michigan Tech steam plant, where they are testing with real flue gas at pilot plant scale.

The steam plant produces flue gas that contains eight percent carbon dioxide. The chemical engineers’ scrubber brought the emissions down to four percent and their goal is to reduce it below two percent.

“Below two percent, we are happy,” Kawatra said. “Below one percent, we will be very happy.”

It’s a real possibility. “We’ve already got it down to zero percent in the laboratory,” Valluri noted.

In the steam plant, they tap a sample stream of flue gas from the boiler’s main exhaust line. The flue gas comes out of the burner at 300-350 degrees Fahrenheit. The sample is compressed through a filter that removes particles, then passes through a cooling unit before it enters the bottom of the scrubbing column.

“The biggest challenge is a fluctuating ratio of gases in the flue gas,” Valluri said. Team member Root elaborates, “You need a cascade control system that measures the carbon dioxide and manipulates the amount of scrubbing solution accordingly.”

“Our next challenges are, how much can we scale the scrubber up and what can we use the carbon dioxide for,” Valluri says. This ties into Valluri’s and Claremboux’s other research project, the conversion of carbon dioxide to useful products. They have been able to produce oxalic acid from carbon dioxide at laboratory scale.

John Simmons, a Michigan Tech alumnus in the Chemical Engineering Academy at Tech and chairman of Carbontec Energy in Bismarck, North Dakota, is supporting Kawatra’s research. He says the savings to industry of this kind of carbon dioxide scrubber is enormous.

The usual method of removing carbon dioxide from emissions uses amines, nitrogen-based chemical compounds that bind the carbon dioxide. But amines cost $20,000 a ton, Simmons said. Carbonates like the soda ash that Kawatra’s team is using cost $200 a ton.

Simmons is excited about the potential for producing a commercial product from the captured carbon dioxide. “I don’t think sequestering it in the ground is a good idea,” he says. “We have to find a way to utilize it commercially.”

The technology, trade-named the "Clearite VI Carbon Dioxide Capture/ Utilization Process," was patented (Patent No. US7,919,064B2 ) by the inventors, S. Komar Kawatra, Tim Eisele and John Simmons, and assigned to Michigan Tech. Carbontec Energy Corporation, the technology sponsor, is the exclusive world-wide licensee and plans to commercialize the technology through joint ventures and sub-licenses.

Simmons is pleased that Kawatra and his students are conducting a pilot plant study of their scrubber in Michigan Tech's natural gas fired steam plant. "It was important to test the process under actual emission conditions," he explains.

Kawatra is happy with the progress he and his students have made removing carbon dioxide from flue gas. And he’s excited about the prospect of creating a marketable product from it. “We want to find uses for it,” he says. “We want to help industry make money. We want to show that you can take harmful waste like carbon dioxide and make it produce a profit.”