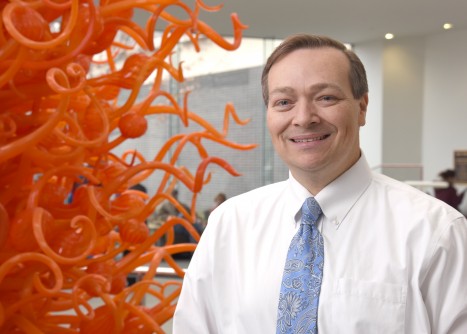 Dr. Larry Anderson is thrilled to be able to offer cutting-edge CAR-T therapy to multiple myeloma patients in a clinical trial.

Newswise — UT Southwestern Medical Center is one of nine exclusive sites in the country enrolling multiple myeloma patients for a clinical trial of the CAR-T “living drug” therapy for cancer.

CAR-T therapy (chimeric antigen receptor T-cell therapy) is an innovative immunotherapy that uses a re-engineered version of the patient’s own immune cells to fight cancer. A UT Southwestern cancer researcher who was among the first patients to be treated, has now been cancer-free for two years.

“It’s thrilling to be part of this pioneering effort using a genetically modified version of the patient’s own T cells to fight their cancer,” said site investigator Dr. Larry Anderson, Associate Professor of Internal Medicine with UT Southwestern’s Simmons Cancer Center. “We are very excited to be pioneering this promising treatment for multiple myeloma in this region. These are patients who either did not respond to traditional treatments or who relapsed at least twice. It is gratifying to be able to offer this next step, which offers such hope."

The CAR-T process involves taking the patient’s T cells, a type of white blood cell in the body’s immune system, and sending them to a commercial laboratory. There, the cells are primed to specifically recognize cancer cells, much like T cells in the body are primed to recognize a virus during an infection. The activated T cells are then returned to the patient’s body, where they attack the cancer cells. Each dose of this CAR-T living drug is unique and specific to the patient.

Multiple myeloma is the second-fastest growing cancer in men and the third-fastest in women, according to the National Cancer Institute, which estimates about 30,000 cases occur each year in the U.S. Multiple myeloma is a blood cancer involving plasma cells, which are white blood cells that make antibodies to fight infection. Bone pain and unexpected bone breaks are common symptoms.

In addition to multiple myeloma therapy, CAR-T is an emerging therapy being offered and investigated for use against other blood cancers.

The Harold C. Simmons Comprehensive Cancer at UT Southwestern, which is recognizing its 75th anniversary this year, is among just 30 U.S. cancer research centers to be designated by the NCI as a National Clinical Trials Network Lead Academic Participating Site. Disclosures: Dr. Anderson is a paid consultant to Celgene Corp., which produces the CAR-T multiple myeloma treatment that is being tested at UT Southwestern; Dr. Laetsch was a paid consultant for Novartis, which makes the CAR-T drug for ALL; Dr. Kansagra indicated “No Interest Reported.”