Makira is home to more than 20 species of lemur, including the critically endangered red-ruffed lemur. 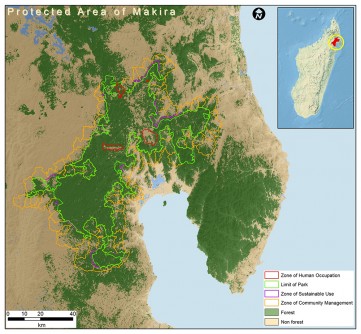 Through this initiative, individuals can now save wildlife and combat climate change by purchasing carbon credits on-line for the first time to preserve one of Africa’s most biodiverse tropical rainforests. Funds from any purchase of carbon credits, which can range from $10 to $1 million, will go directly towards protecting endangered lemurs and other unique species, empowering local communities, and offsetting one’s own carbon footprint.

This groundbreaking initiative provides a retail platform for consumers to purchase REDD+ credits and uses the power of social media networks and crowd funding to generate support for REDD+ projects around the world.

“Every dollar that people spend purchasing carbon credits for Makira will go directly to helping local communities to reduce deforestation even further, tangibly saving some of the planet’s most iconic wildlife while reducing CO2 emissions into the atmosphere,” said Dr. James Deutsch, Vice President for Conservation Strategy. “This new initiative by Stand for Trees is a game changer for Makira, for wildlife, for climate change, and for all of us who want to play our part in saving the planet.”

Stand for Trees will help finance the long-term protection of Madagascar’s Makira Natural Park, a 1,438-square-mile swath of the island’s dwindling rainforests which is managed by WCS in collaboration with local communities. Makira is home to more than 20 species of lemur, including the critically endangered red-ruffed lemur, indri and the silky sifaka, as well as the fossa – Madagascar’s largest carnivore species – and countless other species of plants and animals that are found only in Makira.

The project also benefits the lives of local people by ensuring that 50 percent of sale proceeds are used directly to empower communities to manage natural resources and to increase their household incomes through development of ecotourism, improved rice cultivation, and sustainable vanilla and clove production.

Alison Clausen, Director of WCS’s program in Madagascar said: “Since 2005, WCS’s efforts in managing the Makira Natural Park and working in partnership with local communities to protect the largest remaining block of tropical rainforest on Madagascar have saved more than 23 square miles of forest, an area nearly one and half times the surface of Manhattan. With this new initiative and the support of concerned individuals globally, we are confident that we can do even more in the future.”

Supporters can buy one tonne of carbon——the equivalent of preventing a tonne of CO2 from being released into the atmosphere as a result of deforestation—for $10. To buy credits now, click here:https://standfortrees.org/en/protect-a-forest/makira-natural-park-project. Reduced carbon emissions at Makira and associated benefits for local people and wildlife are globally certified by the Voluntary Carbon Standard (VCS) and Climate, Community and Biodiversity Alliance (CCBA).

Caption: Makira is home to more than 20 species of lemur, including the critically endangered red-ruffed lemur. 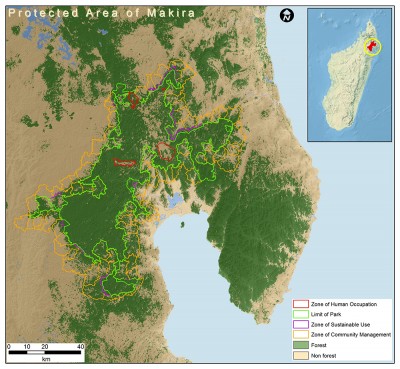