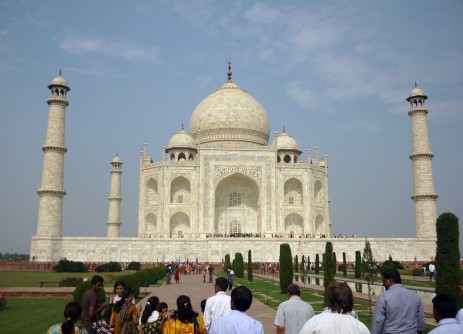 The Taj Mahal attracts millions of visitors each year. Researchers have determined how particulates in the air are discoloring the landmark. 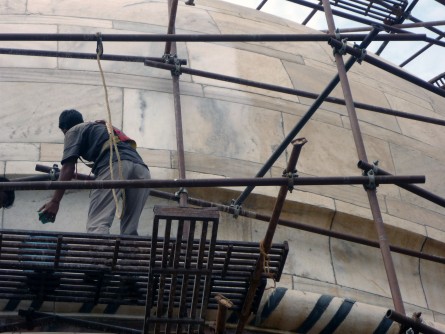 A workers cleans a portion of the Taj Mahal complex. Marble on the right shows brownish discoloration caused by particles of carbon, and dust. 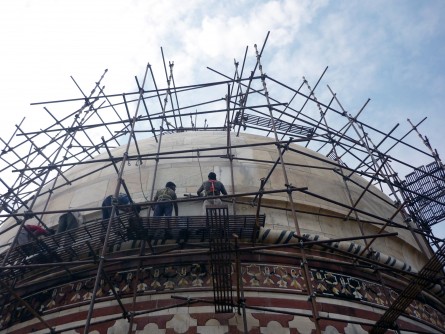 Workers clean a portion of the Taj Mahal complex. Marble on the right shows brownish discoloration caused by particles of carbon, and dust. 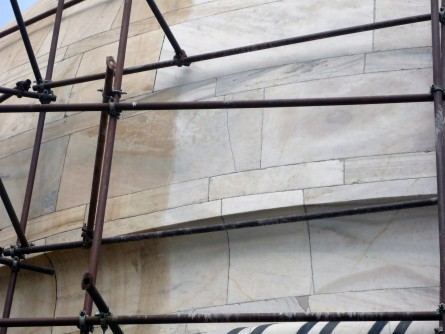 This close-up image shows the contrast between cleaned and discolored marble in the Taj Mahal complex. New research shows that the brownish discoloration is caused by particles of carbon, and dust. 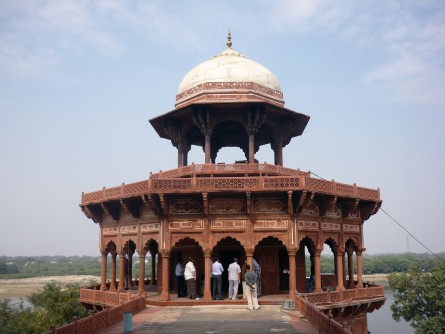 Air sampling equipment located in this section of the Taj Mahal complex was used to determine what was causing discoloration of the landmark structure. 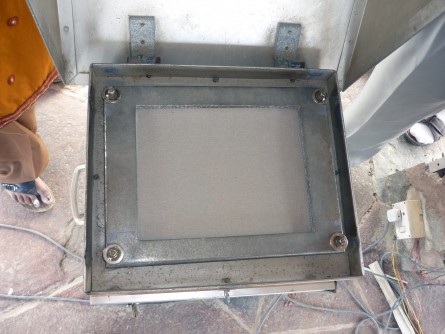 Gray particles in this air filter are particulates captured by air sampling equipment at the Taj Mahal complex:

Newswise — The Taj Mahal’s iconic marble dome and soaring minarets require regular cleaning to maintain their dazzling appearance, and scientists now know why. Researchers from the United States and India are pointing the finger at airborne carbon particles and dust for giving the gleaming white landmark a brownish cast.

Knowing the culprits in the discoloration is just the first step in cleaning up the Taj Mahal. Scientists now must determine where the particles are coming from to develop strategies for controlling them.

“Our team was able to show that the pollutants discoloring the Taj Mahal are particulate matter: carbon from burning biomass and refuse, fossil fuels, and dust – possibly from agriculture and road traffic,” said Michael Bergin, a professor in the School of Earth and Atmospheric Sciences at the Georgia Institute of Technology. “We have also been able to show how these particles could be responsible for the brownish discoloration observed.”

Supported by the Indo U.S. Science and Technology Forum, the U.S. Environmental Protection Agency, and the National Science Foundation, the research was reported online December 3, 2014, in the journal Environmental Science & Technology. In addition to Georgia Tech, researchers from the Indian Institute of Technology at Kanpur (IIT-K), Archaeological Survey of India (ASI), and the University of Wisconsin collaborated on the project.

Built in the 1600s by Mughal emperor Shah Jahan in memory of his third wife, Mumtaz Mahal, the structure is a mausoleum that includes a massive marble dome 115 feet high and minarets that reach 130 feet. Attracting millions of visitors each year, the Taj Mahal became a UNESCO World Heritage Site in 1983.

Beginning in the 1970s, observers noted a brownish cast to the white marble that makes up the structures. Today, routine cleaning, including the painstaking application and removal of a clay material, maintains the brightness of the marble. Air pollution had been suspected as the culprit responsible for the discoloration, but no systematic study had been done and the specific components of the air pollutants responsible for the discoloration and the mechanisms by which they discolor the surface had remained unknown.

To find out what was causing the color change, a team from four different institutions was assembled. In addition to Bergin, it included Sachchida Nand Tripathi and Tarun Gupta from the Indian Institute of Technology in Kanpur, India; K.S. Rana from the Archaeological Survey of India in Delhi; Martin M. Shafer, Ana M. Villalobos, and James J. Schauer from the University of Wisconsin’s Environmental Chemistry and Technology Program, and J. Jai Devi and Michael Mckenzie from Georgia Tech.

The researchers used air sampling equipment to measure what was in the air in the Taj Mahal complex from November 2011 through June 2012. Filters from the air-sampling equipment were analyzed for both fine particulate matter (smaller than 2.5 microns in diameter) and total suspended particulate matter. The analysis was done by scientists in both India and the United States.

In addition, the researchers placed small samples of pristine marble onto the Taj Mahal at various locations near the main dome. After exposure to air pollutants over a two-month period, the samples were analyzed using an electron microscope to measure the size and the number of particles deposited on their surfaces as well as their elemental signatures. This information allowed the researchers to determine the likely composition of the particles.

The researchers found particles of dust, brown organic carbon and black carbon in the filters and on the marble samples, Bergin said. The carbon particles come from a variety of sources, including fuel combustion, cooking and brick-making, trash and refuse burning, and vehicle exhaust. The dust may come from local agricultural activities and vehicular traffic – or from distant sources.

To check their analysis, the researchers refined a model for showing how the surface reflectance of the building’s marble should change with the application of brown and black carbon particles, along with dust. The predictions of the model matched what was being observed on the Taj Mahal.

“We fundamentally showed how these particles change the color of the surface,” said Bergin, who is also associated with the School of Civil and Environmental Engineering at Georgia Tech. “We hope to share this model with others who could use it to determine how urban and natural environments are changing colors due to particulate pollution.”

Now that researchers know what’s discoloring the Taj Mahal, the next step will be to identify the sources of the particles and plan control strategies. The sources could be local – and the government has already taken steps to reduce vehicle and industrial emissions in the area – or the particles could be coming from longer distances away from the region.

While the research focused only on the Taj Mahal itself, reducing particulate matter in the Agra region around the landmark would have additional benefits.

“Some of these particles are really bad for human health, so cleaning up the Taj Mahal could have a huge health benefit for people in the entire region,” said Bergin. “The health of humans and the health of the Taj Mahal are intertwined.”

This research was supported by the Indo U.S. Science and Technology Forum (IUSSTF), the U.S. Environmental Protection Agency (EPA) under grant RD83479901, and by the National Science Foundation (NSF) under PIRE grant 1243535. An opinions expressed are those of the authors and may not necessarily represent the official views of the IUSSTF, EPA or NSF.