Fabry, a biological oceanographer and visiting researcher at Scripps Institution of Oceanography at UC San Diego, studies the effects of ocean acidification on the molluscs known as pteropods. In one experiment, only 48 hours of exposure to slightly corrosive seawater caused normally smooth shells to become frayed at the edges on their way to eventual dissolution, severely diminishing their owners' chances of survival.

The acidity of the water in Fabry's lab had been ratcheted up to levels that might not be seen until the end of the century, but she and other scientists fear that ongoing acidification of ocean water could be causing a slow-motion destruction of ocean ecosystems now. The loading of carbon dioxide into oceans is a consequence of fossil fuel use that has only begun to be widely recognized as problematic in the past decade. Its subsequent effects on seawater chemistry have the potential to spread ecological disaster to a variety of industries dependent on the seas.

To understand what the world might expect, several Scripps research teams are drawing on the institution's expertise in long-term climate data collection and on new technologies that will help them understand when, where, and how ocean chemistry changes when the seas are overwhelmed by increasing infusions of carbon dioxide. They are joining a growing number of international scientists who are turning their attention to the issue. Their collective hope is to understand whether the oceans are approaching a tipping point of widespread damage and to see what can be done to prevent it.

"We know the oceans are getting more acidic. We know lab experiments have shown that organisms find living more difficult as the CO2 increases," said Scripps marine chemist Andrew Dickson, who is collaborating with Fabry to build a network of observing stations off the California coast. "Studies that can clarify how important this is for ecosystems remain to be designed and done."

As humans burn oil and coal, carbon dioxide is released and accumulates in the atmosphere. A little less than half of it stays in the sky and about a third enters the oceans, dissolving into seawater at the ocean surface.

When ocean water absorbs CO2, the two react to form carbonic acid. The acid reacts with carbonate ions, making the ions less available in ocean waters to shell-forming organisms. Robbed of sufficient quantities of a main ingredient for their shells, these organisms may become less hardy and less able to replenish their numbers.

The trend scientists are seeing might seem small. The average pH of water at the ocean's surface has fallen from 8.16 to 8.05 since the beginning of the Industrial Revolution and the advent of fossil fuel use. Pure water in comparison has a pH of 7.

But marine organisms that build shells have grown accustomed to a certain chemical background and they do not take such a decrease well — especially at the pace scientists are documenting. The rate of change that marine creatures have endured in fewer than three centuries is 100 times faster than the rate of change over the preceding 850,000 years. And once the lower pH water is present, it will be there for a long time because of the slow pace of ocean circulation. Dickson likens it to pouring cream in a cup of coffee and stirring it once every 1,000 years.

As a relatively well-studied example of acidification's effects, the pteropod has become what ocean acidification researchers consider their canary in the coal mine. The snails, however, are not the only organisms that are sensitive. Nearly all marine life forms that build calcium carbonate shells are jeopardized by the rising acidity of the oceans. That long list includes corals as well as commercially important marine invertebrates such as abalone, sea urchins, clams, and mussels.

Even fishes might be susceptible to problems as carbonic acid amasses in their tissues. A new study led by Australia's James Cook University found that acidification diminishes the ability of larval clownfish, the colorful species popularized in the film "Finding Nemo," to use the olfactory cues they need to locate suitable habitats.

And though they are not themselves harvested as food, pteropods and other vulnerable zooplankton and phytoplankton have an indirect but profound value to fisheries, being a key part of the diet of pink salmon, mackerel, and cod.

Scientists are concerned less about a sudden mass die-off of shelled organisms than about a persistent assault on their health that won't relent for centuries. Coral reefs, for instance, may reach the point at which they erode faster than they grow by the mid-21st Century, according to some estimates.

"These organisms are likely to have difficulty in secreting their shells in a fully functional way which could alter their reproductive success and their population abundances," said Mark Ohman, a Scripps biological oceanographer who recently added carbon dioxide measurements to the data he regularly collects through the California Current Ecosystem Long-Term Ecological Research (LTER) program led by Scripps.

But at this point, only the chemical basics of acidification are well-understood. New discoveries have the feel of breaking news. Richard Feely and other researchers at NOAA's Pacific Marine Environmental Laboratory made headlines in 2008 when they discovered that masses of acidic water were encroaching on the continental shelf off the West Coast to a surprising extent. The onslaught appears to change throughout the year and scientists still do not understand fully how much pH fluctuates seasonally in coastal waters. They also aren't sure how far masses of lower pH water stretch geographically.

Acidification's potential threat to the California Current, which encompassed most of the area studied by Feely, is making the economically vital ocean region a research target zone. Because Scripps is the home of a key repository of long-term data about the current and greenhouse gases, the institution is becoming a center of ocean acidification studies.

Two key monuments to fastidious long-term data gathering reside at Scripps. The California Cooperative Oceanic Fisheries Investigations (CalCOFI) was launched just after World War II after the West Coast sardine fishery collapsed. It provides a continuous record of temperature, plankton abundance, and other key indicators of the state of the ocean. For most of the program's existence, these data have been gathered quarterly. In 1958, Charles David Keeling initiated measurements of atmospheric carbon dioxide levels at a weather station atop Hawaii's Mauna Loa. Monthly averages are plotted to this day on the iconic graph known as the Keeling Curve.

Both time series and their offshoots help characterize trends in ocean acidification that were present before scientists knew to look for them. Ohman notes that records from CalCOFI are providing "six decades of context" in the form of proxy data ranging from temperature to nutrient concentration. This information will help scientists reconstruct the rate of change in the California Current's acidity. Scientists also hope that the record can tell them not only about acidity trends but how climate cycles like El NiÃ±o cause such trends to fluctuate.

The Keeling Curve provides indirect evidence that not all human carbon dioxide emissions remain in the atmosphere and present-day researchers credit that record for prompting scientists to look for signs of acidification in the oceans. Papers about the phenomenon first started appearing in the 1970s and a decade later, Keeling started a similar time-series of seawater carbon dioxide content and alkalinity levels near Bermuda. Subsequent work by Dickson established the reference standards for measurements of carbon dioxide content and alkalinity of ocean water that have helped researchers uniformly measure trends in acidification.

"The Mauna Loa CO2 time series is the most famous example of what impact you get if you collect very long time series," said Uwe Send, a Scripps physical oceanographer collaborating with Ohman, Fabry, and Dickson, "and we are trying to do the same kind of thing in the ocean in important and representative or critical locations."

Last November, Send, Ohman and NOAA researcher Chris Sabine deployed a mooring with carbon dioxide sensors 250 kilometers (155 miles) southwest of Point Conception, Calif. Contributions from those sensors and several others attached to the mooring feed into data collected by the LTER project, a National Science Foundation-supported program building from CalCOFI that aims to answer scientists' questions about the interplays between California Current organisms and their changing ocean environment.

Fabry and Dickson are leading efforts to deploy two more carbon dioxide sensors this year, one in Carlsbad, Calif., and the other off the Northern California city of Trinidad. The latter launch is part of a California Ocean Protection Council-funded project in which Fabry will conduct complementary tests in the lab to understand how varying pH levels affect marine organisms at different stages of development.

The moored sensors off California are a small contribution to much larger efforts on the global scale. Send is co-leading the international OceanSITES program, which is building a network of stations around the world oceans to collect long time series of changes in ocean climate, carbon, and ecosystems, including acidification.

It took 50 years of case-building on the part of scientists before the world began to respond aggressively to the global warming threat resulting from atmospheric CO2 increases. Because the chemical consequences of adding fossil fuel-derived greenhouse gases is indisputable, Fabry and Dickson hope that the wait for prudent actions will be a shorter one when it comes to the seas.

"What we're doing now will have impacts in our lifetime," said Fabry. "We are certainly leaving a legacy to our children and grandchildren and they're going to ask what did we do about it." 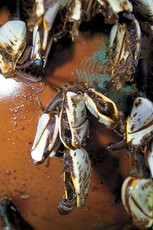 Caption: Barnacles like these clinging to a buoy retrieved off the San Diego coast are among a wide range of calcareous (calcium carbonate shell-forming) organisms jeopardized as increasing carbon dioxide uptake by the oceans lowers the pH of ocean water. 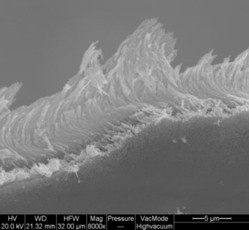 Caption: Scanning electron microscope photograph of the shell of the pteropod Clio pyramidata. A magnified portion of leading edge of shell section shows dissolution after exposure to acidic water. 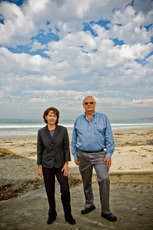 Caption: Victoria Fabry and Andrew Dickson are collaborating to create a carbon dioxide monitoring network off the West Coast. 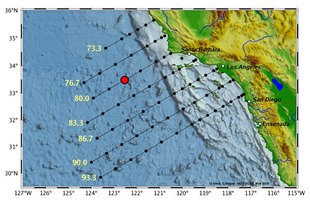 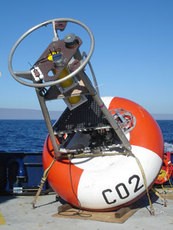 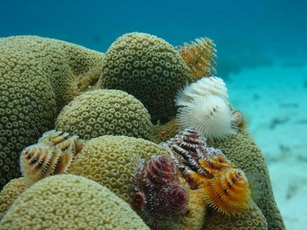 Caption: Montastrea coral off the coast of Curacao and other corals around the world are vulnerable to even slight changes in the pH of seawater.