Newswise — IRAPUATO, MEXICO/BUFFALO, N.Y. — Genes make up about 2 percent of the human genome. The rest consists of a genetic material known as noncoding DNA, and scientists have spent years puzzling over why this material exists in such voluminous quantities.

Now, a new study offers an unexpected insight: The large majority of noncoding DNA, which is abundant in many living things, may not actually be needed for complex life, according to research set to appear in the journal Nature.

The clues lie in the genome of the carnivorous bladderwort plant, Utricularia gibba.

The U. gibba genome is the smallest ever to be sequenced from a complex, multicellular plant. The researchers who sequenced it say that 97 percent of the genome consists of genes — bits of DNA that code for proteins — and small pieces of DNA that control those genes.

It appears that the plant has been busy deleting noncoding “junk” DNA from its genetic material over many generations, the scientists say. This may explain the difference between bladderworts and junk-heavy species like corn and tobacco — and humans.

The international research team, led by the Laboratorio Nacional de Genómica para la Biodiversidad (LANGEBIO) in Mexico and the University at Buffalo, will report its findings on May 12 in Advanced Online Publication in Nature, and the information in this press release is embargoed until 1 p.m. U.S. Eastern Time on May 12.

The study was directed by LANGEBIO Director and Professor Luis Herrera-Estrella and UB Professor of Biological Sciences Victor Albert, with contributions from scientists in the United States, Mexico, China, Singapore, Spain and Germany.

“The big story is that only 3 percent of the bladderwort’s genetic material is so-called ‘junk’ DNA,” Albert said. “Somehow, this plant has purged most of what makes up plant genomes. What that says is that you can have a perfectly good multicellular plant with lots of different cells, organs, tissue types and flowers, and you can do it without the junk. Junk is not needed.”

Noncoding DNA is DNA that doesn’t code for any proteins. This includes mobile elements called jumping genes that have the ability to copy (or cut) and paste themselves into new locations of the genome.

Scientists have spent countless hours puzzling over why noncoding DNA exists — and in such copious amounts. A recent series of papers from ENCODE, a highly publicized international research project, began to offer an explanation, saying that the majority of noncoding DNA (about 80 percent) appeared to play a role in biochemical functions such as regulation and promotion of DNA conversion into its relative, RNA, which for genes, feeds into the machinery that makes proteins.

But Herrera-Estrella, Albert and their colleagues argue that organisms may not bulk up on genetic junk for reasons of benefit.

Instead, they say, some species may simply have an inherent, mechanistic bias toward deleting a great deal of noncoding DNA while others have a built-in bias in the opposite direction — toward DNA insertion and duplication. These biases are not due to the fact that one way of behaving is more helpful than the other, but because there are two innate ways to behave and all organisms adhere to them to one degree or the other. The place that organisms occupy on this sliding scale of forces depends in part on the extent to which Darwin’s natural selection pressure is able to counter or enhance these intrinsic biases.

The new U. gibba genome shows that having a bunch of noncoding DNA is not crucial for complex life. The bladderwort is an eccentric and complicated plant. It lives in aquatic habitats like freshwater wetlands, and has developed corresponding, highly specialized hunting methods. To capture prey, the plant pumps water from tiny chambers called bladders, turning each into a vacuum that can suck in and trap unsuspecting critters.

The U. gibba genome has about 80 million DNA base pairs — a miniscule number compared to other complex plants — and the deletion of noncoding DNA appears to account for most of that size discrepancy, the researchers say. U. gibba has about 28,500 genes, comparable to relatives like grape and tomato, which have much larger genomes of about 490 and 780 million base pairs, respectively.

The small size of the U. gibba genome is even more surprising given the fact that the species has undergone three complete genome doublings since its evolutionary lineage split from that of tomato.

That is, at three distinct times in the course of its evolution, the bladderwort’s genome doubled in size, with offspring receiving two full copies of the species’ entire genome. “This surprisingly rich history of duplication, paired with the current small size of the bladderwort genome, is further evidence that the plant has been prolific at deleting nonessential DNA, but at the same time maintaining a functional set of genes similar to those of other plant species” says Herrera-Estrella.

The study was supported by CONACyT (Mexico), Howard Hughes Medical Institute, the University at Buffalo College of Arts and Sciences and the National Science Foundation. 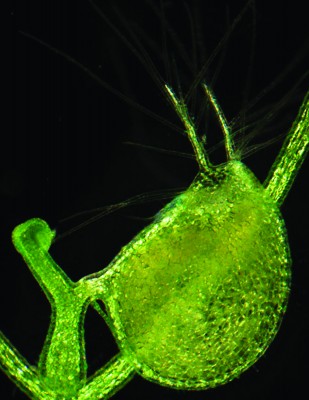 Caption: Light micrograph of the bladder of the carnivorous bladderwort plant, Utricularia gibba. A new study finds that U. gibba has a remarkable genome for a complex organism. Just 3 percent of U. gibba's tiny genome is made from so-called "junk DNA," compared with about 98 percent of the human genome. The finding contradicts the notion that vast quantities of noncoding junk DNA are crucial for complex life. 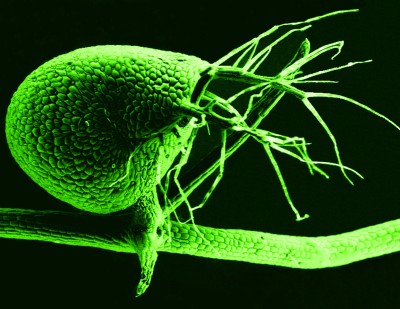 Caption: A scanning electron micrograph shows the bladder of Utricularia gibba, the humped bladderwort plant (color added). The plant is a voracious carnivore, with its tiny, 1-millimeter-long bladders leveraging vacuum pressure to suck in tiny prey at great speed. New research shows that the U. gibba genome contains almost no noncoding DNA, demonstrating that vast quantities of this so-called "junk DNA” may not be necessary for complex life.