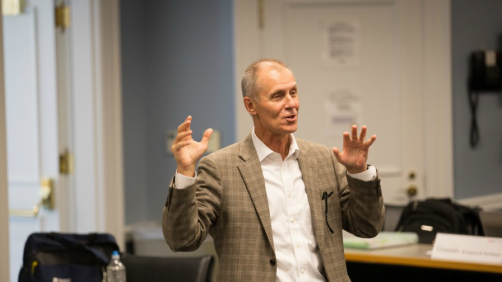 Darden Professor Ken Eades is retiring after 30 years of teaching at the School.

University of Virginia Darden School of Business Professor Ken Eades recalls receiving scads of advice from more tenured faculty when starting his career in Michigan as a young professor roughly 40 years ago.

One particular piece of advice regarding keeping his research and personal time sacrosanct still resonates with Eades, who will retire from Darden this year after 30 years of teaching.

“He said, ‘You understand, Ken, taxes are something you have to pay, but you want to minimize them as much as legally possible,’” Eades recalled. “That’s the same thing you want to do with teaching.”

The advice, of course, did not find a receptive audience with Eades, who, after being selected as the young professor “unlucky” enough to be stuck teaching a case-based course to his students, eventually discovered an aptitude and affection for both the classroom and the case method.

Not that it came easy, at first.

In Michigan, Eades recalled being set to teach finance cases to a section of undergrads, MBAs and executive MBAs armed with little more than a book of cases and his memories of his own case course from his Ph.D. days.

“I really had a lot of trepidation,” Eades said. “It was so scary to get in front of these students.”

Once in front the students, however, the cases came alive, even with a nervous novice at the helm.

“I remember going into class with the full-time MBAs, and they just loved it,” Eades said. “They kept saying, ‘This is so practical! This is so hands-on!’”

The executive MBAs, many older than Eades, also took to the class, but in a different way, teasing out the financial theory behind the lessons, and helping Eades understand the way lessons shifted over different populations.

Over seven years in Michigan, Eades continued to teach the case course, expanding it and adding new cases from a network of like-minded practitioners, especially Darden Professor Bob Bruner. Invitations to visit Darden were offered, and the relationship eventually culminated in a job offer.

If he grew comfortable with the case method at Michigan, Eades’ — who said he was jokingly dubbed “Bob Eades” upon joining a group of finance professors that included Professors Bob Bruner, Bob Conroy and Bob Harris — confidence was rattled upon sitting in teaching planning sessions with his fellow Bobs. He said it became clear how much forethought others were putting into their case discussion prep.

Eades specifically recalled Bruner asking the group, “What are your thoughts on the opening question for the case?” and realizing that he was not aware that he should have thoughts on the matter.

“Bruner kept saying, ‘We have to set the tone here. Think about the flow. It has to be impactful,’” Eades said. “After that two-hour meeting, I came out and thought: ‘What did I get myself into?’”

Thus commenced what Eades called a “redoubling” of his attempts to learn the case method in order to keep up with his new faculty peers. He did that and more, becoming one of the School’s most impactful faculty members in the eyes of students and his fellow professors.

Bruner said Eades has been a “remarkable contributor to Darden’s stature and development” and leaves a legacy as both a superb teacher and forward-thinking leader.

“He has chaired many special committees and projects that helped to build Darden — Ken has afforded the vital glue of leadership within our community,” Bruner said. “Darden is a better place because of his hard work, excellent teaching and high example.”

Eades said his classroom experience at Darden solidified his belief that case method was the optimal manner to produce what he described as professional decision-makers.

“I like to tell students that when you’re an undergrad, you got the answers, but it turns out in grad school, there are no answers, only questions,” Eades said. “And that stuff about yes and no and black and white is gone. It’s all grey, but there are ways to navigate your way through the grey.”

Another surprise for Eades upon arriving at Darden? The genuine relationships with students.

Eades said he was shocked to find that not only did Darden students expect faculty to be an active part of their community and maintain an open-door office policy, they expected the relationship to endure longer than their two years of active instruction.

“It turned out to be absolutely fabulous, but I had no idea it was part of the bargain,” Eades said. “We get spoiled by things that are common for us, and here it’s common to have a community.”

Eades will leave behind a significant body of work as he prepares to step away after 30 years. The once-reluctant case instructor estimates that he has authored about 70 cases, and helped launch the Richard A. Mayo Center for Asset Management and the Strategic CFO Roundtable with Darden’s Institute for Business in Society, both of which strengthen the connections between the School and leading finance professionals.

Eades is particularly pleased with his longstanding participation with Building Goodness in April, the student-run organization dedicated to improving homes for those in need.

Further, Eades had a strong hand charting the current direction of the School, as he chaired the search committee that brought in Dean Scott Beardsley, whom he credits with both “embracing the culture of the School” while also serving as a catalyst for growth and exploration into new areas.

“I don’t think you could do much better,” Eades said. “His values were completely aligned with ours.”

As his Darden career winds down, Eades is comfortable not looking too far ahead. Instead, he is planning to see more of his grandchildren, spend more time on the tennis court and generally do more of the things he likes to do but for which there never quite seemed to be enough time.