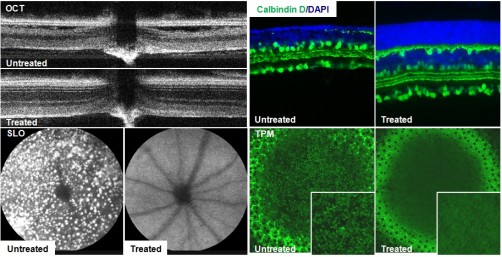 The figure has been generated by the first author Dr. Yu Chen

Newswise — In microseconds, every light ray that enters the eye triggers an explosion of coordinated cellular events. Entering light rays focus on a light-sensitive tissue at the back of the eye called the retina while nearby nerve cells convert the rays into cascades of signals that travel through the optic nerve to the brain. Any damage to the retina or proteins involved in this process can throw off the cascade and impair vision or cause blindness. Macular degeneration, exposure to bright light, and Stargardt disease can damage nerve cells in and around the retina and negatively impact the complex signaling network.

Correcting such a complex system when it goes awry requires a multifaceted approach, according to new research from the laboratory of Krzysztof Palczewski, PhD, professor and chair of the department of pharmacology at Case Western Reserve University School of Medicine. Palczewski and colleagues found that a gentle combination of FDA-approved drugs could protect critical cells in the eye, called photoreceptor cells, against damage caused by bright light. Their systems pharmacology approach to combat photoreceptor degeneration in mice was recently published in Science Signaling.

“Systems pharmacology is one approach to target multiple cell signaling pathways and their downstream effector proteins. It can also be a way to repurpose FDA-approved medications for new indications. The key is combining low doses of medications that have distinct toxicity profiles and pharmacological properties,” indicated Palczewski. Pharmacological properties include things like a drug’s chemical structure, absorption rate, and mechanism of action. A mix of these properties may help combat diseases on multiple fronts.

The drug regime used in the study simultaneously stimulated and blocked G protein coupled receptors (GPCRs) sitting in nerve cell membranes. Nearly all types of cells have GPCRs. The protein family serves as a therapeutic target for 30-50% of all medications, according to Palczewski. The central role of GPCRs is to help transmit signals in and out of cells, activating various proteins along the way.

The research team studied GPCRs in mice genetically modified to have increased susceptibility to retina damage. When the mice were exposed to 30 minutes of bright light, layers of cells near the retina thinned as photoreceptor cells died. Remaining photoreceptor cells were visibly damaged and lacked branches needed to network with nearby cells. These changes are similar to those seen in humans experiencing retina degeneration and can cause blindness.

Palczewski and his team identified 20 GPCRs that were modulated in the damaged mouse retinas. The researchers kept their list focused on GPCRs that interact with specific proteins associated with human retinopathy. They selected drug compounds known to interact with the identified GPCRs and administered them to mice in an attempt to protect the mouse retinas from damage. Mice pre-treated with the selected drugs did not experience retina thinning. “Sixteen compounds with activity on 11 of the 20 identified GPCRs produced complete protection against bright light-induced photoreceptor degeneration,” according to the paper. Mice treated with the 16 compounds retained retinas similar to untreated mice.

The team also wanted to determine whether the drugs had any impact on how photoreceptor cells turn on genes in response to damage. They selected four drugs for further study: bromocriptime, metroprolol, doxazosin, and tamsulosin. The researchers discovered that metroprolol could restore damaged retina gene expression to patterns most similar to those seen in healthy retinas. The other drugs had a similar, but less robust effect.

Palczewski’s team tested low-dose combinations of the four drugs and determined which regimen best protected mice from retina damage caused by bright light. They also successfully teased apart the exact proteins and GPCRs activated or inactivated by the drugs. The researchers discovered a photoreceptor-protecting combination that offered maximum benefit in two mouse models of disease. The protective regimen included a combination of bromocriptime, metroprolol and doxazosin or tamsulosin, each administered at individual sub-therapeutic doses. Palczewski concluded the regimen was more effective than any single drug given at even high doses.

Low doses of GPCR-targeting medications may provide just the nudge needed to restore cell signaling networks in human retinopathies or other complicated disorders. The present study may also provide a foundation for human studies to follow that investigate vision-threatening diseases. Said Palczewski, “This project is ready for clinical tests assessing effectiveness in age-related macular degeneration and Stargardt disease.” Similar systems pharmacology approaches could be used to identify treatments for complex disorders. Added Palczewski, “All chronic illnesses and aging diseases should be tested using similar approaches to those developed in our study.”

This research was supported by grants from the National Institutes of Health (EY018139 to K.A.M.; EY021126 and U01 EY025451 to K.P.), the National Natural Science Foundation of China (81473732 to Y.C.), the Department of Veterans Affairs (IK2BX002683 to P.D.K.), and the Intramural Research Program of the AQ51 National Eye Institute (EY000474 and EY000546 to A.S.). Additional funding was provided by the Arnold and Mabel Beckman Foundation and the Canadian Institute for Advanced Research. K.P. also receives funding as the John H. Hord Professor of Pharmacology.