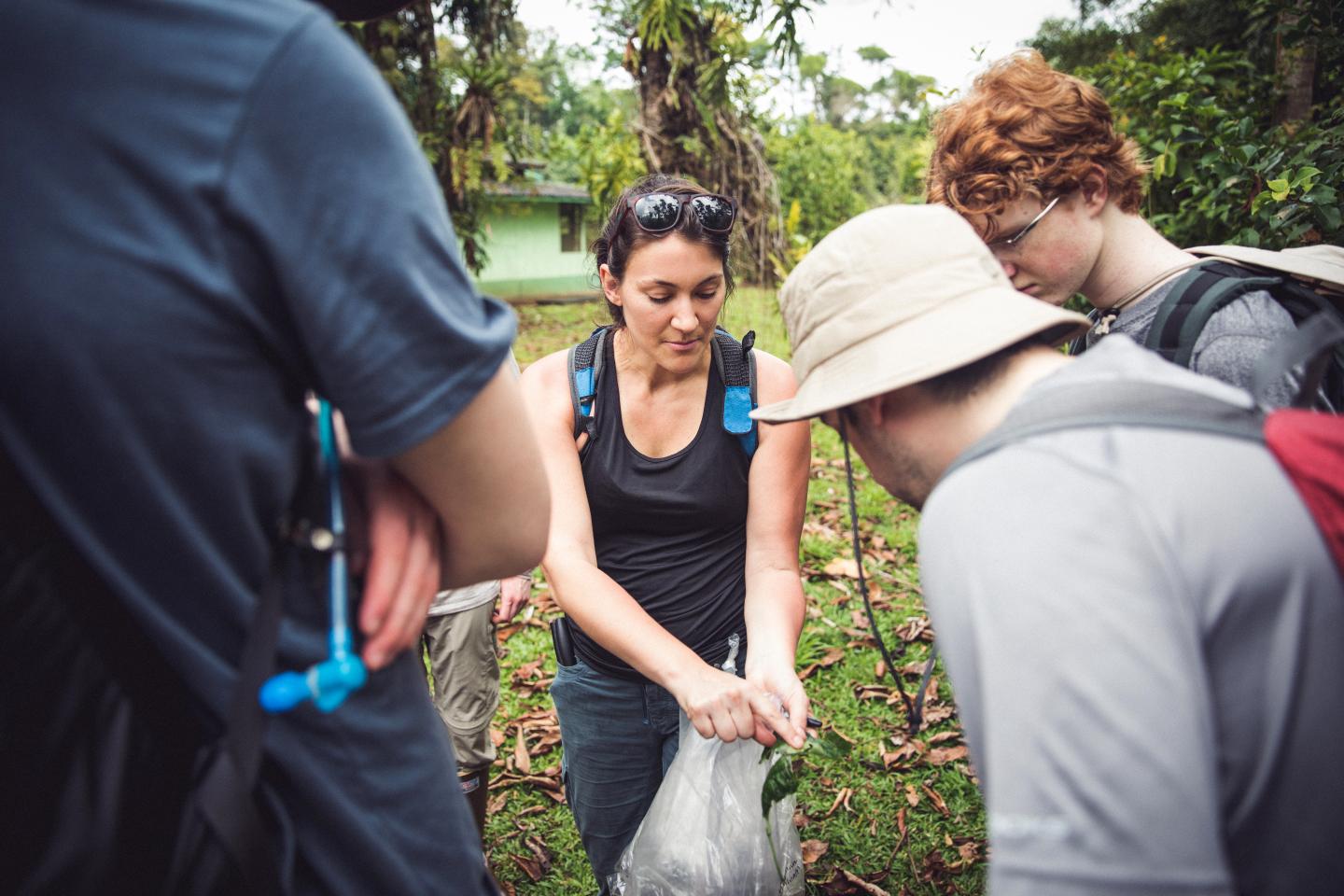 Doctoral candidate Danielle Salcido of the University of Nevada, Reno's College of Science works with Earthwatch volunteers in Costa Rica, including this team of high school students from Beacon Academy in Chicago, to collect caterpillar, parasite and plant data for research.

Newswise — Reno, Nev. - Using a 22-year dataset of plant-caterpillar-parasitoid interactions collected within a patch of protected Costa Rican lowland Caribbean forest, scientists report declines in caterpillar and parasitoid diversity and density that are paralleled by losses in an important ecosystem service: biocontrol of herbivores by parasitoids.

The study by University of Nevada, Reno researchers, published in Scientific Reports this week, reveals distressing declines among common caterpillar genera and the ecosystem services provided by their natural enemies.

"Declines in herbivore and enemy diversity, as well as parasitism frequency, are partly explained by changes in climate, including increases in extreme precipitation events and increases in mean temperatures," lead author of the study Danielle Salcido said.

In 2017, the observation by Professor Lee Dyer, of the University's College of Science, that La Selva Biological Research Station, Costa Rica experienced more frequent flooding events, became the catalyst for a study led by graduate student Salcido to examine patterns in extreme precipitation events and their potential ecological impact for plant-caterpillar-parasitoid interactions in this lowland tropical forest.

"La Selva is an isolated patch of forest surrounded by agriculture that is responsible for global exports of banana, pineapple and palm," Salcido said. "Habitat patches like La Selva are source populations of parasitoids that control pest populations in surrounding agriculture plantations. Reductions in parasitism by specialized parasitoids threaten this service and ultimately ecosystem health within the forest."

Along with the help of coauthor and University of Nevada, Reno professor, biologist and butterfly expert Matthew Forister, these researchers found staggering declines in caterpillar and parasitoid diversity and density across the 22 years of the study. More than 40% of the 64 common caterpillar genera collected declined in frequency- a result that suggested the loss of entire groups of caterpillar.

Increased precipitation variability and shifts in mean maximum and minimum temperatures were the most important climate variables associated with declines in diversity.

"We show climate change partially explains the observed declines," Salcido said. "The variable with largest effect in all models was the effect of time, and indicates the role of unmeasured variables such as surrounding land-use change and pesticide use."

In the decades prior to the study, much of the forest surrounding La Selva was deforested for pasture which was converted to high-yield, high input plantation farming such that pesticide use increased substantially during the years of the study.

Time-lag effects of extreme climate events were a notable contributor to the reduction in parasitism.

"We found floods in a given year affected parasitism in the subsequent year," she said. "Caterpillar-parasitoid interactions are intimately linked and depend on narrow windows for synchronous development. Subtle shifts in host and parasitoid population cycles due to variable lag effects can have major consequences for these highly-specialized and synched interactions."

Declines in insect biodiversity reported in this study come as little surprise amidst a recognized global biodiversity crisis. This study maintains a level of urgency to the matter of insect declines and more importantly, has revealed the vulnerability of the most speciose regions and taxa even within protected habitats, and the role of extreme climate events on ecosystem function.

"This dataset represents one of few of its kind and is notable for the contribution by Earthwatch community scientists," Salcido said. "Ideally results like ours provide an impetus for policy change that promotes research, conservation and management. In the least, we hope it motivates continued research related to the ecological effects of global change drivers in the tropics."

The data used for this study is primarily collected by continuous teams of community scientists the scientists bring to the site each year, which highlights the importance of harnessing public participation for the success and longevity of long-term and continuous tropical collection and monitoring.

The Paper in the Nature research journal Scientific Reports, "Loss of dominant caterpillar genera in a protected tropical forest," was authored by Salcido, Forister, Humberto Garcia-Lopez and Dyer.

Forister and Dyer recently coauthored, with 70 other scientists from around the world, a second paper in the Nature publication Nature Ecology and Evolution titled "International scientists formulate a roadmap for insect conservation and recovery" that is testament to the call-to-action prompted from increased public awareness on insect declines. Their road map to insect conservation and recovery was published this week.