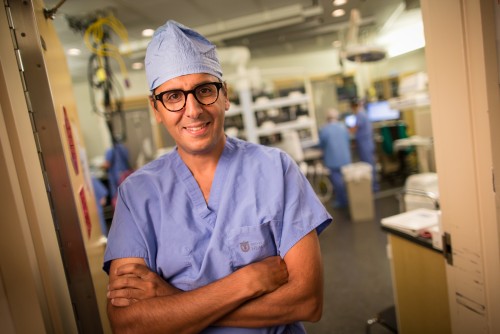 Newswise — Millions of people around the world are diagnosed with heart failure and atrial fibrillation every year. In the weakened state, the heart is unable to pump enough oxygenated blood throughout the body. A new study revealed patients receiving radiofrequency catheter ablation compared to traditional drug therapies for atrial fibrillation (AF), a contributing factor to heart failure, had significantly lower hospitalization and mortality rates. The findings are published in the February 1 issue of the New England Journal of Medicine.

“Atrial fibrillation prevents the heart from filling and pumping properly,” begins Nassir F. Marrouche, M.D., professor in Internal Medicine and Executive Director of the Comprehensive Arrhythmia Research and Management (CARMA) Center at University of Utah Health. “When the heart is not synchronized, it hastens heart failure and increases the risk of stroke.”

The medical community has long debated the ideal treatment for AF, especially for patients who suffer from left ventricular dysfunction, a weakening of the left ventricle that supplies most of the heart's pumping power. Until now, no clinical studies have been conducted that support one definitive treatment.

“None of the traditional drug therapies are improving the patient’s condition, a major medical dilemma when we see these patients in our clinics,” Marrouche said.

Marrouche and colleagues at the U of U Health and Klinikum Coburg, Germany conducted the eight-year CASTLE-AF clinical trial to compare catheter ablation to conventional drug therapies recommended by the American Heart Association and European Heart Society to control the heart’s rate.

Patients from North America, Europe and Australia with heart failure and a history of symptomatic atrial fibrillation were screened for the study. The research team selected 363 participants, characterized by heart function at less than 35 percent capacity, for the clinical trial. The patients were separated into two groups, receiving either radiofrequency catheter ablation (179) or a conventional drug therapy (184).

The ablation procedure aims to isolate all pulmonary veins and to restore regular heart rhythm. In the clinical trial, ablation lesions were made at the discretion of the operators using their preferred ablation system.

During the ablation process, a catheter is snaked through the patient’s body to the site of abnormal heart cells. The doctor delivers a dose of radiofrequency energy, similar to microwaves, to destroy the abnormal cells, which restores the heart’s regular rhythm.

“The CASTLE-AF clinical trial represents a landmark in the history of cardiovascular medicine because of its potential impact on our patients who are suffering from heart failure,” said James Fang, M.D., Chief of Cardiovascular Medicine at the University of Utah Health. “For the first time in a randomized study, the strategy of catheter ablation for atrial fibrillation may be better than the current approach for these patients.”

All of the participants included in the CASTLE-AF trial had previously received an implantable cardioverter defibrillator (ICD), which allowed for continuous monitoring of heart rate. The ICD may have improved outcomes. Marrouche believes this is the primary limitation in the study and may have affected death rates in both groups.

“This clinical trial is the first time we can show with hard data that ablation is saving more lives than arrhythmia medications,” said Marrouche. “It also lowers the cost of treating patients by keeping them out of hospital due to lower incidence of worsening heart failure.”

The article, titled “Catheter Ablation for Atrial Fibrillation with Heart Failure”, is available in the New England Journal of Medicine. The work was initially presented in August, 2017 at the European Society of Cardiology meeting in Barcelona, Spain.

This research was supported primarily by Biotronik GmbH, a leading global medical device company with products and services focused on cardiovascular and endovascular diseases.