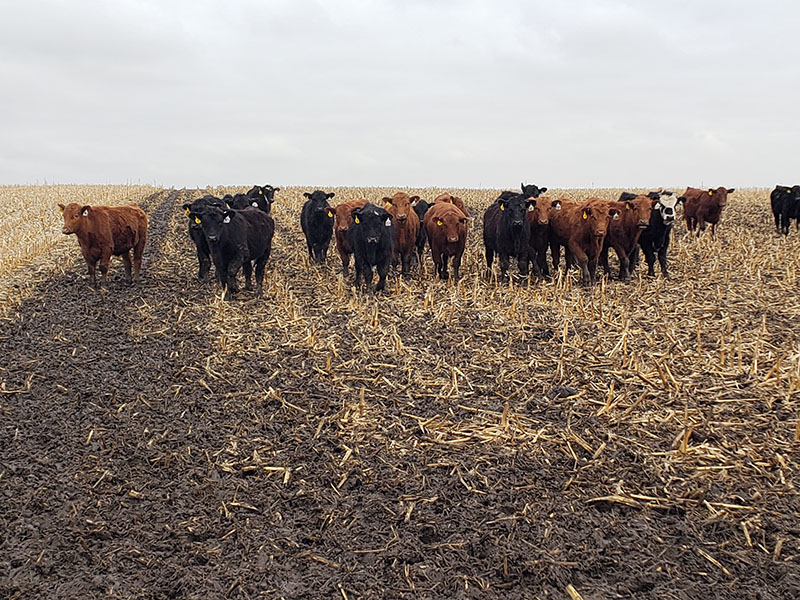 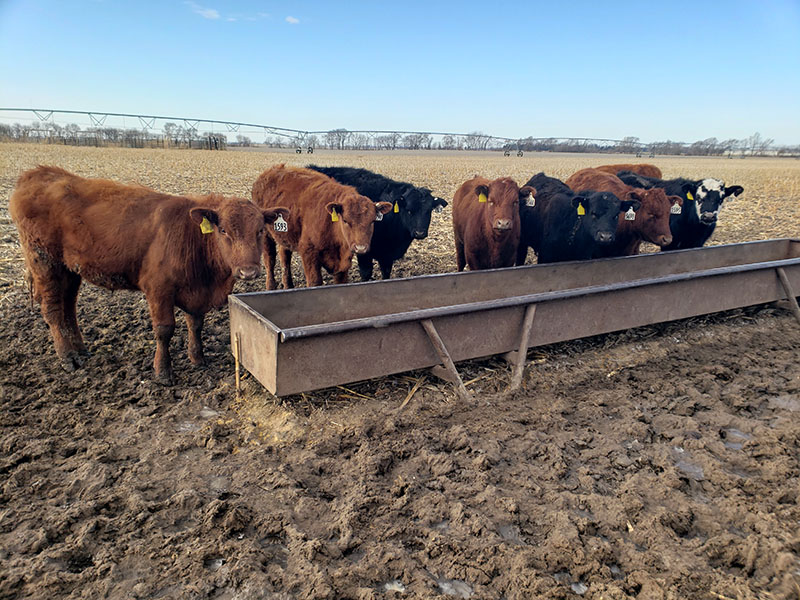 Little corn residue remains after concentrated grazing in the high stocking density treatment the day that cattle were moved from the fields in March of 2020.

January 6, 2021 - By late fall, much of the Midwest is a pleasing landscape of dry, harvested corn fields. It makes for a bucolic rural scene on highway drives. But the corn litter that’s left over doesn’t seem useful, at least to untrained eyes.

But to those in the know, that corn residue is a valuable resource. Scattered leaves, husks, kernels, and cobs can serve as food to grazing cattle. When managed well, corn residue can increase farm income, provide affordable food for cattle, and efficiently use the land to feed people.

Morgan Grabau, a member of the American Society of Agronomy, studies the interactions of cattle grazing and crop productivity. She recently presented her research at the virtual 2020 ASA-CSSA-SSSA Annual Meeting.

“Corn residue is an under-used resource. Only 15% of the corn residue acres in the central U.S. are grazed,” says Grabau.

One big concern farmers have about cattle grazing corn residue is soil compaction. If cattle compact the soil too much, future crops might not grow well. Addressing the issue of soil compaction is the main focus of Grabau’s work.

In the past, Grabau’s research team has shown that compaction isn’t too bad during fall and winter grazing. When the soil is dry and frozen, it resists stamping cattle hooves. “My research was focused on the effect of grazing in the spring when the soil is thawed and wet,” she explains.

Grabau studied two different grazing systems. In one system, researchers let a small number of cattle graze corn fields for 45 days starting in mid-February. The other system tripled the number of cattle but cut grazing time to just 15 days in March. This way, the total amount of grazing was equal. But the time the cattle spent on wet fields varied, which could affect how the soil responds to all that trampling.

The researchers studied corn fields in Nebraska, where around half of the corn fields are grazed after harvest. The team measured various soil properties that contribute to compaction and the yield of the soybeans planted in the fields the following season after cattle were done grazing. The team repeated the experiment over two years.

“Much like previous fall grazing studies, minimal effects were seen on soil properties and yield due to spring grazing, regardless of the number of cattle and area grazed,” says Grabau.

The soybean productivity of the fields following grazing did show some changes. The highly concentrated grazing for just 15 days actually increased yields slightly.

“This yield increase could be due to more residue removed, causing warmer soil temperatures for plants to grow,” Grabau says.

The cattle did cause some soil compaction. But their effects were limited to the surface level of fields.

“Compaction isn’t permanent,” Grabau says. “Soil can loosen up again as it dries and saturates over and over, and microbial activity in the soil also reduces compaction.”

Fortunately, soybean seedlings had no problem establishing themselves in the soil after grazing even with some surface compaction present.

“Even when we created a worst-case scenario, grazing in the spring when the ground was wet, compaction was minimal and subsequent soybean yields were not negatively affected,” Grabau says.

Although Grabau says that fall and winter grazing is probably still the best solution, farmers shouldn’t be afraid of grazing cattle in the spring.

“The integration of crops and livestock is a beneficial production system,” says Grabau. “Grazing cattle on corn residue can be a great way to make even more food for human consumption from corn fields, as both the corn grain and plant residue can be used as feed for livestock.”

Morgan Grabau is a graduate student in animal science at the University of Nebraska-Lincoln. This project is supported by the Nebraska Agricultural Experiment Station with funding from the Hatch Multistate Research Program of the United States Department of Agriculture National Institute of Food and Agriculture.

Caption: Little corn residue remains after concentrated grazing in the high stocking density treatment the day that cattle were moved from the fields in March of 2020.