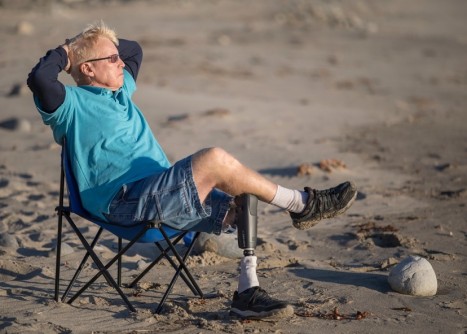 Newswise — LOS ANGELES (March 6, 2018) — Christopher Rowles sits on a beach chair, crossing one leg over the other as he enjoys the sunset at Point Mugu. He missed performing that simple maneuver, not to mention walks on the beach and trout fishing, until recently.

The former Los Angeles police officer lost half of his leg to amputation in 2011 after seriously injuring his knee during a workout and enduring two dozen surgeries.

After his amputation, Rowles, 59, walked on a socket prosthesis that irritated his skin, ached constantly and left him vulnerable to dangerous falls each time he removed the artificial limb for relief.

Now a new technique—called osseointegration—used at Cedars-Sinai has given the retired Los Angeles police officer newfound mobility and the freedom of movement he once enjoyed. Rowles is one of the first people in the country to undergo the novel procedure, which permanently anchors a titanium implant into the leg bone.

The technology, originally developed for dental implants, offers improved stability and mobility for patients like Rowles, one of nearly 2 million people in the U.S. living without limbs.

Rowles is thrilled with his new leg and his ability to move effortlessly without pain. For the first time since his amputation, he can return to his favorite hobby—river fishing.

"It's beyond words. I'm very excited," he said. "This is the first time I have been able to cross my legs since the summer of 2011."

Rowles' surgeon, Daniel Allison, MD, one of only a handful of surgeons in the country to use the new technique, said it offers hope to many who are hobbled by the traditional approach that is painful and leaves patients with an awkward gait.

In a video, Allison explains that osseointegration uses a two-step process to anchor an artificial limb to bone. In the first surgery, Allison inserted a metal rod into the bone of Rowles' thigh bone. In the second operation, called the coupling, Allison made a small incision in the implant where the connector attaches to the artificial limb.

"This new technology is the closest thing I've seen to actually creating a bionic leg," said Allison, a surgeon in the Cedars-Sinai Department of Orthopaedics. "There's been a great need, and this technique offers an excellent solution."

Allison and Rowles got a recent glimpse of the potential of the new implant. Soon after Rowles was fitted with the device, he sped down the hallway of Allison's office, expressing his delight at his new mobility.