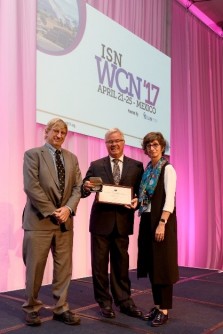 Jordan, director of the Division of Nephrology and medical director of the Kidney Transplant Program at Cedars-Sinai, accepted the Jean Hamburger Award at the World Congress of Nephrology in April. It is the most prestigious award given by the nephrology society for research benefiting kidney patients.

“Dr. Jordan is a pioneering clinician researcher who has advanced the field of organ transplantation by discovering a way to expand the size of the donor pool by reducing the risk that a patient’s body will reject a donated organ,” said Leon Fine, MD, vice dean of Research and Graduate Research Education at Cedars-Sinai.

“These awards distinguish him among a field of internationally prominent scientists and are high tributes to the quality and relevance of his research,” Fine said.

Jordan’s groundbreaking work in transplant immunology led to the development of drug therapy protocols that significantly reduce the risk that a kidney transplant patient’s immune system will reject the new organ. Decades of Jordan’s research and collaboration with colleagues in pharmacology have improved the treatment of organ transplant patients around the world.

“It is a great honor, and humbling to me personally, to have our work recognized as being among the best in nephrology and immunology,” Jordan said. “Dr. Jean Hamburger was a major force in the early development of transplantation immunology. It is a privilege to carry on that tradition.”

Jordan said he was equally honored to receive the award from the American Society of Transplantation.

“Dr. Jordan’s early work in IVIG for desensitization of antibody rejection set the stage for later developments by other investigators in this field,” said Melissa Patterson, a program manager with the organization.

“His discoveries have led to advances in diagnoses and treatment of immunologically disadvantaged patients awaiting life-saving transplantation.”