Celebrating the past, present and future of space science 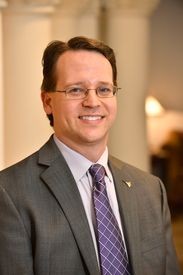 Newswise — West Virginia University Professor of Physics Paul Cassak is among a select group of scientists tackling grand challenges in space in a new series from the American Geophysical Union.

In celebration of AGU’s centennial, the special series explores major research discoveries over the last century and where research is still needed to address fundamental questions in our understanding of Earth and the solar system.

Cassak, in collaboration with University of Bergen physicist Michael Hesse, highlighted the past, present and future of magnetic reconnection research in a February 2020 article.

“It is behind many of the dangerous effects associated with space weather, including damage to satellites, endangering astronauts and impacting the power grid and pipelines,” Cassak said. “Understanding reconnection enables us to describe and predict these magnetic explosions.”

“We describe where it plays a role, its impacts on society and what we now know about it,” Cassak said. “We point to future research challenges, including implications and utility of our recently developed knowledge.”

Ongoing research at WVU, such as the new Center for Kinetic Experiment, Theory and Integrated Computation Plasma Physics and ongoing studies of fast-radio bursts in the Center for Gravitational Waves and Cosmology, could lead to these future breakthroughs.

“We tried to inspire people with the article,” Cassak said. “Our goal was to write in a way that non-experts could understand it, while experts could brainstorm research ideas for 20 years from now. It’s good for science.”