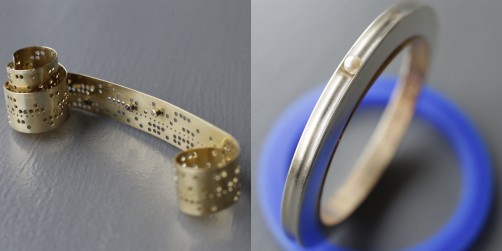 Creativity inspired by science: prototypes of the jewellery awards for the 12 winning women

Newswise — This time next week, on Tuesday 11 October at Bletchley Park, sees the launch of an initiative to celebrate women in maths and computing. As a new branch of the existing Suffrage Science scheme, it will encourage women into science, and to reach senior leadership roles.

Women make up no more than four in ten undergraduates studying maths (London Mathematical Society ), and fewer than two in ten of those studying computer science (WISE report, 2014 ). Despite much effort, there has been little sign of improvement. In fact, the number of women studying computer science at the undergraduate level has been in decline since the 1980s. The more senior the research position, the fewer women there are.

Suffrage Science aims to make a difference. The MRC Clinical Sciences Centre (CSC) at Imperial College London formed the scheme five years ago. There are currently two sections, one for women in the Life Sciences, and one for those in Engineering and the Physical Sciences. This event launches a third specialism, for women Maths and Computing. At the launch, 12 women will receive awards to celebrate their scientific achievements and ability to inspire others.

Many of the awardees have overcome gender-specific barriers to excel in their research. “I did once introduce myself to someone from industry who thought I was a waitress,” says awardee professor Christl Donnelly, a statistician at Imperial College London. “I don’t think that would have happened to a man if he had approached a male counterpart.”

The twelve winning women plan to make a real difference for the next generation. Professor Ann Blandford, who researches human-computer interaction at University College London, says she is a leading computer scientist who also happens to be a woman, and this embodies her vision of the future. “For me it’s about making it normal for a woman to be in computer science.”

Guest speaker Dr Sue Black, who is an advocate for women in computing and pioneer of the campaign "Saving Bletchley Park", will talk about how she overcame prejudice to ‘make it’ in a male-dominated world.

The awards themselves are pieces of jewellery, designed by students at the arts college Central Saint Martins-UAL, and inspired by science. One is a golden brooch punctured with holes that encode a secrete message, reminiscent of the punctured tape once used to store computer data. The second, a silver bangle, also holds a secret. Engraved on the inside, and hidden beneath a layer of silver, is what many mathematicians consider the most beautiful equation in mathematics, Euler’s equation.

After two years, the 12 winners hand on their jewellery to a recipient of their choice, at an awards ceremony. This scientific “relay” creates an ever-expanding cohort of talented women with a connection. Handing on the Suffrage Science jewellery is a vote of confidence by one woman for another. This resonates with the Suffragette movement for votes for women, from which the scheme draws both its name and its inspiration.

Professor Peter Diggle, president of the Royal Statistical Society and chair of the Medical Research Council’s Strategic Skills Fellowships Panel, said: “The more initiatives we have to encourage women to consider careers in mathematics, statistics and computing, the better.”

The winners fall into four categories: