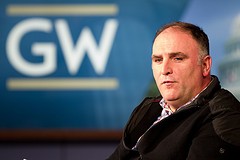 courtesy of the George Washington University

Newswise — WASHINGTON—World-renowned chef José Andrés will address graduates of the George Washington University at its Commencement on May 18. The James Beard winner is known to the George Washington community through his acclaimed restaurants, his PBS television series, his food advocacy work and his popular class, “The World on a Plate: How Food Shapes Civilization,” where he calls on students to change the world through food. Mr. Andrés will receive an honorary doctorate of public service and deliver remarks to an estimated 25,000 graduates and guests at a ceremony like no other in the world on the National Mall.

"José Andrés brings boundless energy, wit and imagination to his work not only as a renowned chef but as a passionate champion of education, health and economic opportunity, both locally and globally," said George Washington University President Steven Knapp. "I know our graduating students will be stimulated and inspired by his reflections on his extraordinary and multifaceted career."

Winner of the Outstanding Chef Award from the James Beard Foundation, which is the highest honor for a chef in the United States, and one of Time magazine’s 100 most influential people, Mr. Andrés is recognized as a culinary innovator. His company, ThinkFoodGroup, manages several top Washington, D.C., restaurants including Jaleo, Zaytinya and minibar by José Andrés, along with others in Miami, Las Vegas, Los Angeles and Puerto Rico. Mr. Andrés has advocated for hunger and nutrition issues around the world through his World Central Kitchen, a nonprofit inspired by a visit to Haiti, that aims to feed people facing humanitarian crises across the globe, and as a culinary ambassador for Global Alliance for Clean Cookstoves helping to raise awareness of the death, sickness and injury caused by toxic smoke from cooking stoves in developing countries. He is chairman emeritus of Washington’s renowned DC Central Kitchen and chairman of the new non-profit L.A. Kitchen. He also has spoken out in favor of immigration reform, having just become a U.S. citizen last year.

A member of George Washington University’s Urban Food Task Force, Mr. Andrés is a special adviser to Dr. Knapp on food issues. The interdisciplinary course Mr. Andrés teaches explores foods from a variety of perspectives, with students studying food as a public health issue, an industry, a science and as a political instrument. He’s helped develop an Integrated Food curriculum at the School Without Walls campus at George Washington University. He teaches Science and Cooking at Harvard University and is the dean of Spanish studies at the International Culinary Center in New York.

“I am so humbled to be asked to give the commencement address this year at the George Washington University and to receive the honorary doctorate of public service. I’ve been in Washington for over 20 years and I’ve always had great respect for the university and its influence not just in Washington but around the country and the world. This university is so special, located in the heart of our nation’s capital, so close to White House, this is where our future leaders are learning how to shape our world. For me this is a true honor,” said Mr. Andrés.

Ms. Cooper retired last year from the Greater Washington Urban League, where she served as president and CEO for nearly a quarter of a century. Previously, she served as chief of staff to D.C. Mayor Marion Barry and held a variety of positions in District government. She serves on numerous boards and commissions and has received many awards for her tireless commitment to helping minorities gain employment, education and opportunities for business ownership.

Mr. Ramsey, who was recently tapped to lead DC2024’s effort to bring the Summer Olympics to Washington, stepped down from the Board of Trustees in 2013 after 15 years of service to GW, including six as chairman. His philanthropic endeavors and accomplishments include establishing the Ramsey Student Investment Fund, and he also oversaw the presidential search committee that selected Dr. Knapp as president, the creation of the 20-year Foggy Bottom campus plan and the development of the strategic plan.

- Bruce Sewell, J.D. ’86, general counsel and senior vice president of legal and government affairs at Apple, at the Law School;- David Shambaugh, B.A. ’78, professor of political science and international affairs, at the Elliott School of International Affairs;- Kurt Newman, president and chief executive officer at Children’s National Medical Center, at the School of Medicine and Health Sciences;- Maureen P. McCausland, president and chief nursing officer at MedStar Health, at the School of Nursing.

The George Washington UniversityIn the heart of the nation's capital with additional programs in Virginia, the George Washington University was created by an Act of Congress in 1821. Today, GW is the largest institution of higher education in the District of Columbia. The university offers comprehensive programs of undergraduate and graduate liberal arts study, as well as degree programs in medicine, public health, law, engineering, education, business and international affairs. Each year, GW enrolls a diverse population of undergraduate, graduate and professional students from all 50 states, the District of Columbia and more than 130 countries.