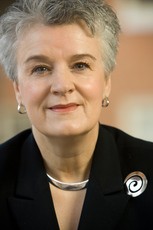 Newswise — As St. Patrick's Day approaches, the legend will be retold of how the Christian missionary Patrick banished all the snakes from Ireland. However, zoologists say there never were snakes in Ireland, and historians suggest that the snakes refer instead to the druids, who had their own non-Christian religion. Over time the Christian church incorporated elements of the druids' traditions into its own religious practices in Ireland.

Linda McKinnish Bridges, professor of ministry studies in the Wake Forest Divinity School, teaches the students in her Celtic Christianity class about the unique blend of Christianity with indigenous religions such as druidism found in Ireland, Scotland and Wales.

Bridges says that in those countries, Christianity was assimilated peacefully rather than through violence. "From the fifth through the 10th centuries the two faiths mixed easily, creating an egalitarian, monastic community that was open to pre-Christian myth, accepting of the notion that deity was revealed through sacred landscape," she says. Today remnants of the druidic tradition remain within the practice of Christianity in Ireland.

Bridges, herself a descendent of Irish immigrants to Appalachia, first turned her attention to Celtic Christianity in 1997, as she sought ways to defend women in leadership positions in the increasingly conservative Southern Baptist Convention. She focused on the leadership of Brigid, a nun in Ireland in the fifth century renowned for her devotion to the poor. Brigid founded the convent at Kildare, and is one of the most-loved saints of all Christianity. Over time, her legend became entwined with tales of the Irish Goddess Brighid, another example of the assimilation of Christianity with the existing pagan traditions.

While studying Celtic Christianity in Ireland, Scotland and Wales during a sabbatical leave from Baptist Theological Seminary in 1997, Bridges visited sacred wells and caves, as well as monastic settlements that maintained what they called "cells for the saint," isolated meditation spaces for their community's religious leader.

Bridges says Celtic Christianity has much to offer 21st century life: a sense of egalitarianism, recognition of the Earth as sacred soil and the notion of creating intentional space for solitude and retreat. This is the first time she has taught Celtic Christianity at Wake Forest; however, she has lectured, led retreats and seminars and published on the topic.

Carolyn Ashburn, a third-year Divinity School student, is one of eight students in the course. "One of the things that struck me is the nature of men and women in the egalitarian system," she said. "Men and women both did things within the early church, so there was not this hierarchy." Ashburn also enjoys the poetry of the tradition, and the sense that God is present in all things. "It seems to me to be more that God is with you every minute," she said, "God is not just someone you call upon when you're in trouble."

Bridges and Wanda Balzano, Director of Women and Gender Studies, are creating a travel course on Irish saints and scholars for the 2009 spring semester. Balzano, a scholar of modern Irish literature, and Bridges, with her interest in medieval Celtic Christianity, will lead students to various sacred Celtic sites in Ireland, using both modern and ancient literature as a literary background for exploration.