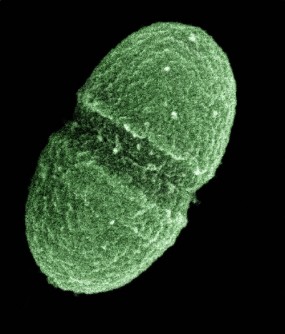 The bacterium Enterococcus faecalis, which lives in the human gut, is just one type of microbe that was studied as part of the Human Microbiome Project funded by the National Institutes of Health (NIH).

Newswise — Trillions of microbes inhabit the human body, occupying virtually every nook and cranny. And most of the time, this relationship is a friendly one, with microbes helping to digest food, strengthen the immune system and ward off dangerous pathogens.

But despite their prominent roles, researchers have understood little about which microbes reside in specific sites of the body. Now, a consortium of some 200 U.S. scientists at Washington University School of Medicine in St. Louis and elsewhere report findings from the most comprehensive census of the microbial make-up of healthy humans.

The research, published June 14 in Nature and in several Public Library of Science (PLoS) journals, provides new details and even some surprises.

For example, the researchers found that even healthy people typically carry low levels of harmful bacteria in and on their bodies. But when a person is healthy, these pathogens don’t cause disease; they simply coexist in an abundance of beneficial microbes. Now, scientists can investigate why some pathogens can suddenly turn deadly, an endeavor that will refine current thinking on how microorganisms cause disease.

“It’s not possible to understand human health and disease without exploring the massive community of microorganisms we carry around with us,” says George Weinstock, PhD, associate director of The Genome Institute at Washington University and one of the project’s principal investigators. “Knowing which microbes live in various ecological niches in healthy people allows us to better investigate what goes awry in diseases that are thought to have a microbial link, like Crohn’s and obesity, and why dangerous pathogens sometimes, but not always, cause life-threatening illnesses.”

Washington University and its Genome Institute played a major role in the new research, known as the Human Microbiome Project. The five-year initiative was funded with $153 million from the National Institutes of Health (NIH), with $32 million coming to the university. Genome Institute scientists decoded about half of the 5,000 specimens from nearly 250 healthy volunteers.

Washington University also was one of two geographically distinct sites that enrolled study participants. The other center was Baylor College of Medicine in Houston.

“Data generated from this study has the added potential to provide scientists with new insights into how local environments shape the composition of microbes that are found in healthy individuals,” says co-investigator Mark Watson, MD, PhD, associate professor of pathology and immunology.

Many scientists regard humans as supra-organisms, a synergistic community of both human and microbial cells that is more than the sum of its parts. Microbial cells in the human body are key players; they outnumber human cells by at least 10 to one.

To get a handle on the healthy human microbiome, the researchers sampled 15 body sites in men and 18 in women, including areas of the mouth (nine sites, including the teeth), skin (two behind the ear and each inner elbow), nose, vagina (three sites) and lower intestine (stool). In St. Louis, most samples were collected at the School of Medicine. Teeth and gum samples were collected at Saint Louis University’s dental school.

In all, the scientists identified more than 10,000 species of microbes that occupy the human ecosystem, documenting the impressive diversity of microbial life in the human body with more accuracy than earlier estimates.

“Our bodies are part of a microbial world,” says Weinstock, who also is a professor of genetics and microbiology. “You can think of our ecosystems like you do rain forests and oceans, very different environments with communities of organisms that possess incredible, rich diversity.”

Using new genomic techniques, Genome Institute scientists including Erica Sodergren, PhD, research associate professor of genetics, and Makedonka Mitreva, PhD, research assistant professor of genetics, took an inventory of the microbes in the samples by sequencing a gene found in all microbes. This gene, 16S rDNA, serves as a barcode of life to indicate which species are there.

The Genome Institute team also sequenced the DNA of entire microbial communities in a subset of samples, to catalog the genes present, as well as to identify viruses, fungi and other non-bacterial organisms.

The researchers noted unique communities of microbes in every site in the body. Interestingly, the microbial communities that live on the teeth are different from those in saliva. And the most diverse collection of microbes was found to live on the skin, which might be expected because it is the body’s barrier to the outside world.

The scientists also reported that the body’s collection of microbes contributes more gene activity than humans themselves. While the human genome includes some 22,000 genes, it’s a mere fraction of the 8 million genes that are part of the human microbiome.

These microbial genes are critical to good health. Those in the gastrointestinal tract, for example, allow humans to digest foods and absorb nutrients that our bodies otherwise could not handle. Microbial genes also produce vitamins and compounds that naturally suppress inflammation in the intestine.

Also, confirming earlier, smaller studies, the new research shows that components of the human microbiome clearly change during an illness. When a patient is sick or takes antibiotics, the species of the microbiome may shift substantially as one bacterial species or another is affected. Eventually, however, the microbiome settles into a state of equilibrium, even if the previous composition is not completely restored.

As part of the Human Microbiome Project, the NIH funded a number of studies to look for links between particular communities of microbes in the body and illness. Results of some of this research, reported in PLoS, underscore the clinical applications of microbiome research to improve human health.

At Washington University, researchers led by Gregory A. Storch, MD, the Ruth L. Siteman Professor of Pediatrics, examined the microbes in the noses and blood of children who developed sudden, high fevers that couldn’t be traced to a specific cause. Unexplained fever is a common problem in children under age 3, and they are often treated with antibiotics as a precaution, which contributes to antibiotic resistance.

Storch and his colleagues, including Kristine Wylie, PhD, a postdoctoral research associate at The Genome Institute, found that specimens from the sick kids contained more species of viruses, some of them novel, than children without fever, who also were included in the study as a comparison. Fever may be part of the body’s defense against disease-causing viruses, but the researchers also showed that children without fever carried viruses, though in lower numbers. Understanding the difference between viral infections with and without fever will be important in applying microbiome techniques in the clinic, the scientists say.

In another project, Weinstock and his Genome Institute colleagues, along with Katherine Pollard, PhD, and her team at the University of California, San Francisco, identified previously unknown microbial taxa in stool samples from 11 healthy individuals. While these new, not-yet-named microbes were found in relatively low levels, the research indicates they may be quite common because they were found in multiple volunteers.

And in research at St. Louis Children’s Hospital, Phillip Tarr, MD, the Melvin E. Carnahan Professor in Pediatrics, and neonatologist Barbara Warner, MD, professor of pediatrics, and others are investigating whether a life-threatening gastrointestinal illness in premature babies is linked to microbes in the intestinal tract. Necrotizing enterocolitis affects about 10 percent of premature babies, usually in the first month of life, and is fatal in 15 percent to 30 percent of cases.

The researchers are collecting stool samples from premature babies to identify and quantify differences between the microbial communities of the infants who develop the illness and those who don’t. This information may provide a foundation for developing ways to prevent or cure the illness.

“The future of microbiome research is very exciting,” Weinstock says. “This large-scale effort will open doors in many areas of medicine to improve our understanding of good health and the treatment and prevention of disease.”

The research is funded by the National Institutes of Health (NIH) Common Fund. NIH grant numbers include: U54HG004968 and R01HG004872.