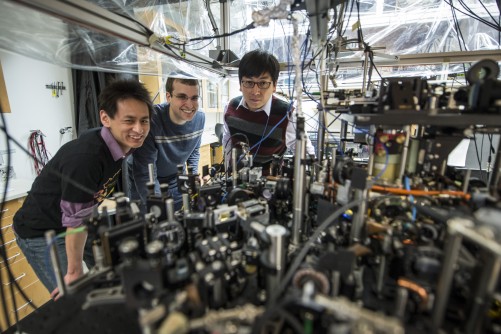 Newswise — Scientists discovered in 1937 that liquid helium-4, when chilled to extremely low temperatures, became a superfluid that could leak through glass, overflow its containers, or eternally gush like a fountain.

Future Nobel laureate Lev Landau came along in 1941, predicting that superfluid helium-4 should contain an exotic, particle-like excitation called a roton. But scientists, including Landau, Nobel laureate Richard Feynman and Wolf Prize recipient Philippe Nozières have debated what structure the roton would take ever since.

“Even nowadays, after seven decades, it remains an issue of interest and controversy,” said Cheng Chin, professor in physics at the University of Chicago. But in a new paper published Feb. 3, 2015, in Physical Review Letters, Chin and four associates describe how they can create roton structure in a new system: atomic superfluid of cesium-133 in the laboratory.

Scientists who specialize in superfluids have found it difficult to study rotons. Chin’s team has pioneered a system that will make it much easier to reveal the long-cloaked mysteries of the roton.

The UChicago researchers generated artificial rotons using what they call the shaken lattice technique. With this technique, the physicists created a superfluid in a one-foot cylindrical chamber cooled to a temperature of approximately 15 nano-Kelvin, just a tiny fraction of a degree above absolute zero (minus 459.6 degrees Fahrenheit).

During the experiment, 30,000 cesium atoms became trapped in a crossing pattern of infrared laser beams. This optical lattice holds the atoms fast, like eggs in a crate, while gently shaking them.

“We need about 10 seconds to reach that temperature to prepare a superfluid as our first step,” Chin said. “It is a brand new idea that shaking the optical lattice leads to the emergence of the rotons.”

The superfluid persists for several seconds, during which time the physicists create the roton structure and image it to see how the structure influences the superfluid’s properties.

Competing research teams at the University of Science and Technology in Shanghai, China, and at Washington State University also succeeded in creating roton structure using a different technique within few weeks after the Chicago group announced the result last summer. Those teams used additional laser beams to excite the atoms in the proper way.

“We approached the challenge to create rotons based on a new technology that we recently developed,” said Li-Chung Ha, a graduate student in physics at UChicago. The lead author of the Physical Review Letters paper, Ha played a key role in developing the shaken lattice and in-situ imaging techniques used to collect the roton data.

Chin’s research group developed the lattice shaking technique over a period of years. In 2013, Ha, Chin and UChicago postdoctoral scholar Colin V. Parker published a paper in Nature Physics showing that a variation of that technique could reveal interesting magnetic features in ultracold atoms. Later, they realized that they could use the same technique to create roton structure.

“With this technique, we can engineer an excitation spectrum of the atoms,” Ha said. This feature, a hallmark of superfluid helium, is one of three pieces of evidence reported in the paper indicating that Ha and his associates had successfully created roton structure.

The other two lines of evidence include the measurements of roton energy confirming that its manifestation depends on the atomic interaction. The UChicago team also observed how roton excitations affect the superfluidity by dragging a laser speckle pattern across the superfluid.

“Experimentally, we see that a superfluid will become weaker in the presence of roton structure,” Chin said. A superfluid can flow with no friction up to a maximum speed, called “superfluid critical velocity.” Rotons suppress the critical velocity, which is the opposite of the desired goal to improve the robustness of superfluidity.

How robust can superfluidity be?

Researchers have proposed many ways to increase the robustness of superconductors, and atomic superfluids offer experimental means to test these ideas, Chin said.

“Superconductors can transfer energy without dissipation, that is, without energy loss, so a robust superconducting material can find widespread applications everywhere,” he said. At the moment, power companies still use copper wire for energy transmission, which carries with it energy losses ranging from 30 to 40 percent from power plant to home or office.

Switching to superconductivity is currently impractical because superconducting material is expensive, and it works only at extremely low temperatures. More importantly, Chin noted, “a single superconducting wire can only carry a limited amount of energy.”

“Our experiments provide a new platform to study excitations of a superfluid. They can help us better identify the key issues that limit the robustness of superconductivity,” he said.