Emerging mechanism that is linked to diabetes may be passed from one generation to another. 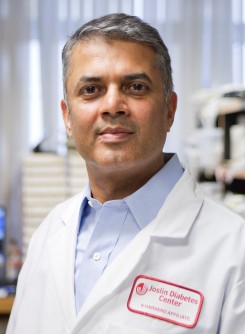 Newswise — BOSTON  – October 11, 2018 – To avoid diabetes, we need healthy populations of the pancreatic “beta” cells that produce insulin for us. Research at Joslin Diabetes Center in Boston now has shown that the health of these crucial cell populations can be regulated in part by an unexpected biological route—dynamic modifications of RNA involved in the biological pathways that signal the cells to grow and secrete insulin.

“One exciting aspect of our research is that dynamic modifications of RNA have the potential to transmit regulatory actions from one generation to the next,” says Rohit N. Kulkarni, MD, PhD, who is Co-Head of Joslin’s Section on Islet Cell and Regenerative Biology and a Professor of Medicine at Harvard Medical School.

Kulkarni, who received this year’s Albert Renold Prize from the European Association for the Study of Diabetes (EASD), outlined early discoveries about RNA modifications and their link with growth factor signaling pathways in beta cells during his Renold Lecture on October 2 in Berlin.

The Kulkarni lab focuses on understanding how beta cells can remain healthy and multiply, hoping to find ways to generate more of the cells to counter both type 1 and type 2 diabetes.

Following up on one of their investigations about how the cells regenerate, the scientists wondered whether a form of genetic regulation known as “RNA methylation” might prove important.

In RNA methylation, messenger RNA is chemically modified by the addition of a methyl group, which changes its behavior and thus the instructions it delivers for producing proteins, Kulkarni explains.

Although this process was discovered decades ago, RNA methylation has only been studied extensively in recent years, with the arrival of extremely sensitive RNA sequencing technologies, he says.

His group is in the forefront of investigating RNA methylation in beta cells, performing studies in mouse and human cells and in mice. The work is funded by the U.S. National Institutes of Health and may have implications for both type 1 and type 2 diabetes.

The Joslin investigators found links between methylation of messenger RNA and a growth signaling pathway involving insulin and IGF-1 receptors that is key in beta cell biology. This RNA methylation might prove important in regulating many aspects of beta cell behavior, such as how the cells divide or how effectively they are stimulated by blood glucose to produce insulin, Kulkarni says.

Additionally, understanding the role of RNA methylation might help to guide the research efforts now underway in many labs that attempt to derive beta cells from stem cells or from various types of adult cells. “RNA methylation may be playing a role here that is worth exploring,” he says.

The Albert Renold Prize and Lecture honors the memory of the distinguished diabetologist and researcher, who was founder of the lnstitut de Biochimie Clinique in Geneva and one of the founding fathers of EASD.

Joslin Diabetes Center is world-renowned for its deep expertise in diabetes treatment and research. Joslin is dedicated to finding a cure for diabetes and ensuring that people with diabetes live long, healthy lives.  We develop and disseminate innovative patient therapies and scientific discoveries throughout the world. Joslin is an independent, non-profit institution affiliated with Harvard Medical School, and one of only 11 NIH-designated Diabetes Research Centers in the U.S.