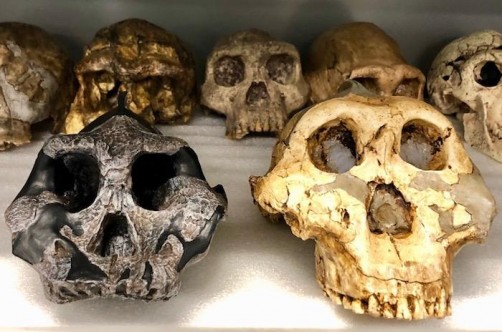 Newswise — A new study published this week in the journal Proceedings of the National Academy of Sciences documents dietary shifts in herbivores that lived between 1-3 million years ago in Ethiopia's Lower Omo Valley. The research team, led by Enquye Negash, a postdoctoral researcher in the George Washington University Center for the Advanced Study of Human Paleobiology, examined stable isotopes in the fossilized teeth of herbivores such as antelopes and pigs and found a shift away from C3-derived foods, characteristic of woody vegetation, to C4-derived foods, representative of grasses and sedges. The shift happened at two distinct time periods, approximately 2.7 million years ago and 2 million years ago, when the environment of the Lower Omo Valley was transitioning to open savanna.

The study, “Dietary trends in herbivores from the Shungura Formation, southwestern Ethiopia,” served as a comparative framework to an associated hominin diet study, also published this week, of which Negash was a co-author. The associated study, “Isotopic evidence for the timing of the dietary shift towards C4 foods in eastern African Paranthropus,” examined carbon isotope data from the fossilized tooth enamel of Paranthropus boisei, a nonancestral hominin relative. Led by Jonathan Wynn, now a program director in the National Science Foundation’s division of Earth sciences, the research team behind that paper found a profound shift toward the consumption of C4-derived foods approximately 2.37 million years ago, which preceded a morphological shift of P. boisei’s skull and jaw. Given the direct evidence provided by the abundant, well-dated fossilized teeth and their chemical composition, the new findings suggest behavioral dietary changes can precede apparent morphological adaptations to new foods.

FROM THE RESEARCHERS:
“Major dietary shifts that are observed in our study reflect the response of the herbivores to major ecological and environmental changes during this time. This allowed us to better understand the environmental context of similar dietary changes in hominins.”

“Although we’re interested in how the diets of our immediate and distant ancestors evolved to produce our modern human diet, it is very important to consider these hominins as a small part of an ecosystem that included other plant and animal species that responded to changing environments in an interconnected way.”

This work was supported by National Science Foundation (NSF) award 1252157. Wynn was also supported by an NSF Independent Research and Development (IR/D) program.