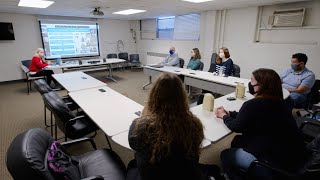 A new University of Kentucky Human Development Institute (HDI) program is helping to meet that need by equipping health and education professionals with the specialized skills and knowledge needed to effectively care for children with developmental disabilities. 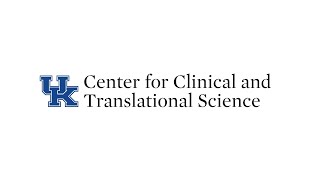 University of Kentucky Receives $23.5 Million Clinical and Translational Science Award from the NIH 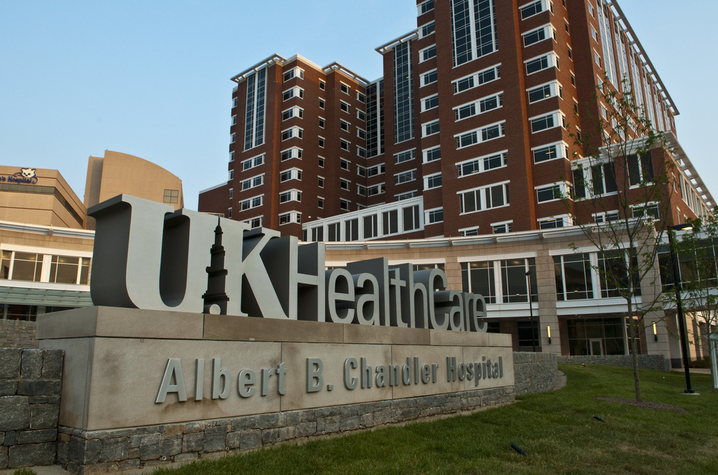 UK HealthCare, UofL Health, the Kentucky Department for Public Health’s Heart Disease and Stroke Prevention Program (KHDSP), and other state partners have been awarded the prestigious Paul Coverdell National Acute Stroke Program Grant by the Centers for Disease Control and Prevention. This $1.8 million grant aims to optimize both stroke prevention among those at high risk as well as improve the care and outcomes for stroke patients throughout Kentucky. 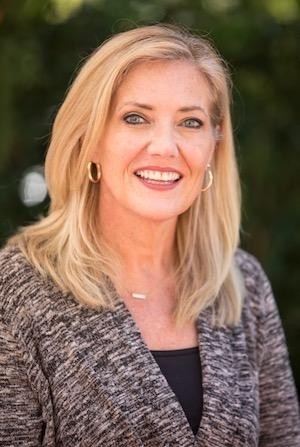 Conversion therapy is discredited and increases risk of suicide

Pride Month is being marked by some lawmakers in Kentucky with a renewed push to ban “conversion therapy – the discredited practice of trying to change someone’s sexual orientation or gender identity. If successful, the bill, which aims to prohibit mental health professionals in the state from "engaging in sexual orientation and gender identity change efforts” with minors, would make Kentucky the 21st state in the U.S. to put in place such a prohibition. Two experts in mental health counseling explain why they welcome this move but remain concerned that at present many LGBTQ youth live in states that have no ban in place protecting them from conversion therapy – a practice that the scientific community has long since shunned. 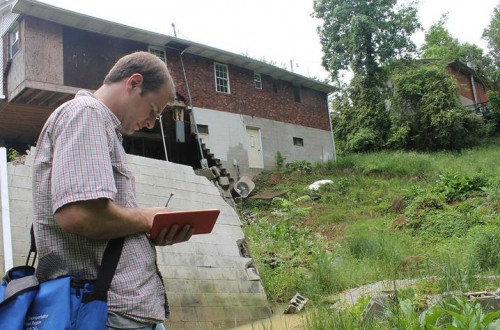 Funded by FEMA, the three-year project will allow Matt Crawford, a landslide researcher, to work with local officials in eastern Kentucky to adopt strategies for reducing landslide risks to infrastructure and improving response for landslide events.

A new study authored by David Chester, who graduated with a doctorate in experimental psychology in the College of Arts and Sciences from the University of Kentucky, delves deeper into sadistic tendencies and aggressive behavior. More specifically, the emotions that accompany aggression. 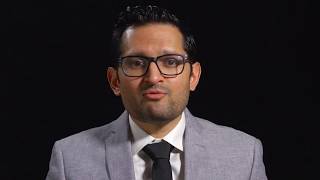 A new University of Kentucky study published in the Journal of the American College of Surgeons shows a direct link between the adoption of the Affordable Care Act (ACA) Medicaid expansion and the impact of colon cancer on Kentuckians. 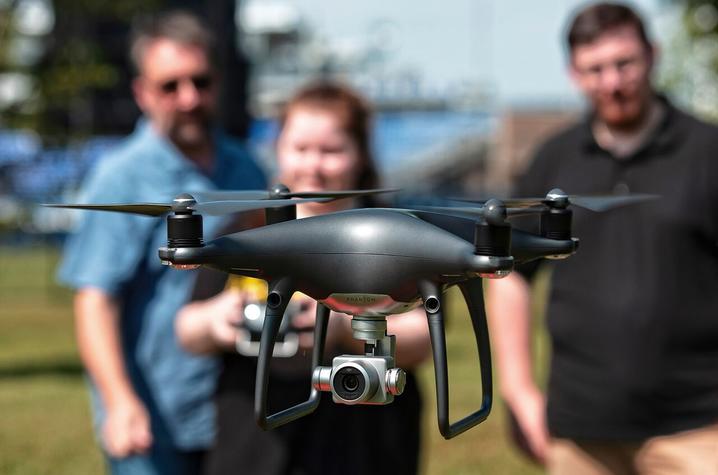 In a drone journalism class in Kentucky, students are learning to use new drone technology for news gathering purposes.

Through a recent five-year, $2.3 million grant from the National Institutes of Health (NIH), University of Kentucky faculty Don Frazier and Brett Spear will partner with faculty from qualified minority-serving institutions across the U.S. and Puerto Rico to help improve diversity in science and health care.

Research out of the University of Kentucky has identified a potential pathway by which certain ARV drugs -- commonly given to patients with HIV -- give rise to liver disease.

The axolotl's genome has been fully assembled. What are implications for science and medicine? 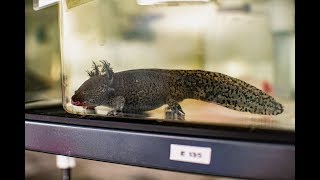 Scientists at the University of Kentucky have assembled the entire genome of the Mexican Axolotl, the key to unlocking the secrets of regeneration with potential for life-changing clinical applications down the road.

Sci-Fi to Reality: Superpowered Salamander May Hold the Key to Human Regeneration

Scientists at the Unviersity of Kentucky have assembled the entire genome of the Mexican Axolotl, the key to unlocking the secrets of regeneration with potential for life-changing clinical applications down the road. 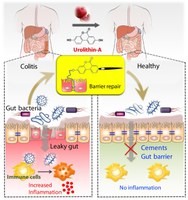 LOUISVILLE, Ky. - Scientists at the University of Louisville have shown that a microbial metabolite, Urolithin A, derived from a compound found in berries and pomegranates, can reduce and protect against inflammatory bowel disease (IBD). Millions of people worldwide suffer from IBD in the form of either ulcerative colitis or Crohn's disease, and few effective long-term treatments are available. 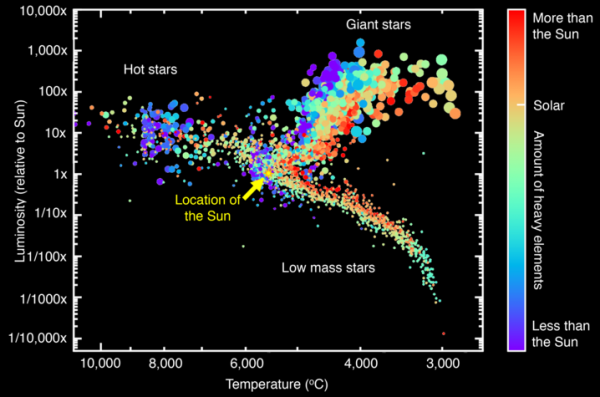 The MaNGA Stellar Library, or MaStar for short, is named after the Sloan Digital Sky Survey’s Mapping Nearby Galaxies at Apache Point Observatory (MaNGA) survey it was designed to support.

Using discarded foreskins from circumcisions, researchers were able to identify a potential cellular mechanism that connects a mother's smoking while pregnant with an increased risk of offspring obesity later in life 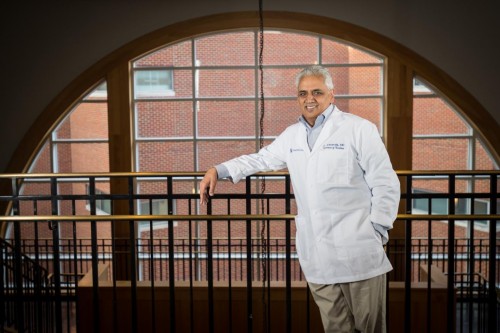 A Proposal to Correct Minority Underrepresentation in Clinical Trials

A neurologist takes the research community to task for its lack of minority representation in Phase III clinical trials for drugs to treat Multiple Sclerosis (MS).

Bah, Humbug? Psychology Expert on How to Cope With Holiday Stress

'Tis the season to be merry and bright! But you may be feeling less than joyful during the "most wonderful time of the year." Do you experience stress, anxiety or even depression from November to January? If so, you're not alone.

Worried That Grandpa's Behavior Is Dementia? Here's How to Tell the Difference. 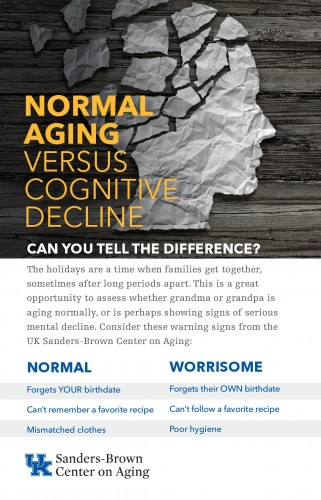 The holidays are coming. When you sit at the table with Grandma, are you worried that her forgetfulness is Alzheimer's? Here are a few tips to help you tell the difference. 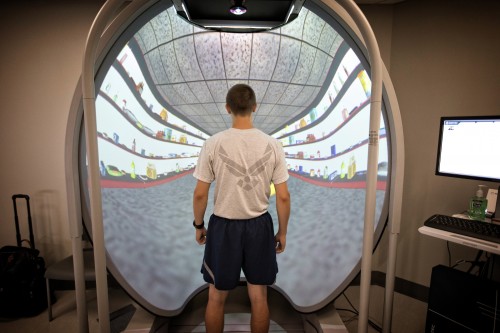 Researchers at the University of Kentucky College of Medicine have discovered that targeting a specific signaling pathway could potentially provide a new therapeutic avenue for treating Fetal Alcohol Syndrome, the most severe fetal alcohol spectrum disorder. 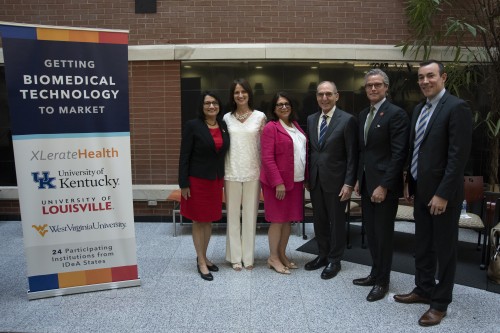 XLerateHealth, LLC, a Louisville-based healthcare technology accelerator that focuses on startups and commercialization, will join forces with a consortium of 24 academic institutions led by the University of Kentucky (UK), in partnership with the University of Louisville (UofL) and West Virginia University (WVU). 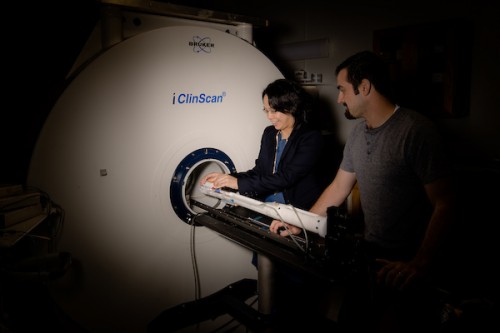 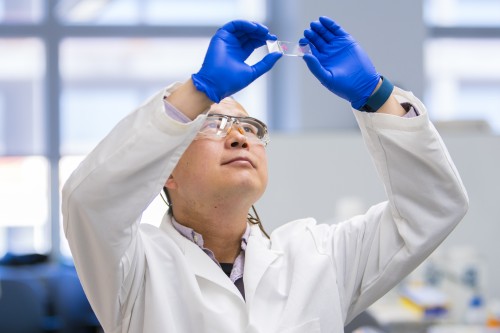 A new study by University of Kentucky Markey Cancer Center researchers suggests that targeting a protein known as collagen XIII could be key for suppressing breast cancer metastasis. 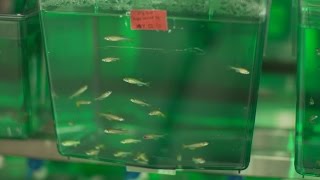 Ann Morris, associate professor of biology at UK, will use the National Institutes of Health funding to continue her cutting-edge research in retinal development and regeneration.

In a study published in the Journal of Controlled Release, University of Kentucky Markey Cancer Center researchers used nanoparticles to deliver powerful chemotherapy drugs directly to lungs affected by metastatic disease while avoiding toxicity elsewhere in the body.

Innovative Research Could Result in a Billion More Being Fed

Expert Available to Comment on Controversy Re: Use of Aspirin to Prevent Diabetes, Heart Attack and Stroke 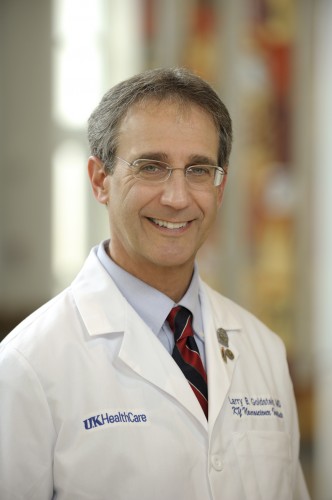 A pilot clinical trial exploring the benefit of d-amphetamine combined with physical therapy for stroke patients found no evidence that the regimen improved post-stroke motor recovery.

As students, faculty, staff and visitors enter Memorial Hall this fall it is highly likely their eyes will be drawn upward to a new creation in the dome at the building’s entry. Karyn Olivier's gold-leafed artwork, which features African-American and Native American images, hopes to shine new light on many misrepresented Kentuckians from the state’s history. 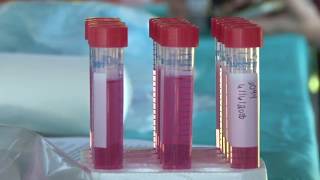 A University of Kentucky neurologist who stumbled across a family with a gene mutation that can cause Lou Gehrig's Disease is merging science, medicine and family in a quest for a cure. 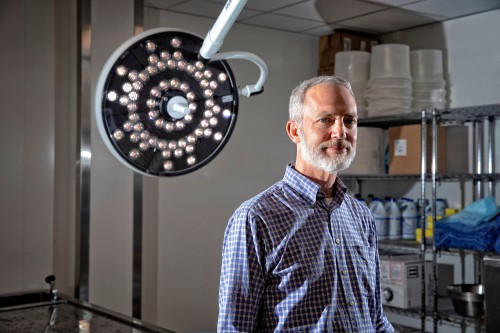 Forensic Pathologist Is a Storyteller, Wearer of Many Hats

Do Obese Patients Have a Higher Risk of Infection and Dying After Colon Surgery?

In a study published in the August issue of Diseases of the Colon & Rectum, investigators from the University of Alabama at Birmingham sought to answer this question. While it has been long recognized that heavy patients are at higher risk of complications after surgery, Dr. Wahl and his colleagues wanted to find out whether there was a difference whether a patient was merely pudgy or downright obese.

What Is Important to Patients Undergoing Colorectal Surgery?

What do patients really want? These are Important questions that doctors at the University of Vermont have tried to answer. In the August issue of Diseases of the Colon & Rectum, Dr. Wrenn and his colleagues surveyed 167 patients who had undergone a colorectal resection between 2009 and 2015. 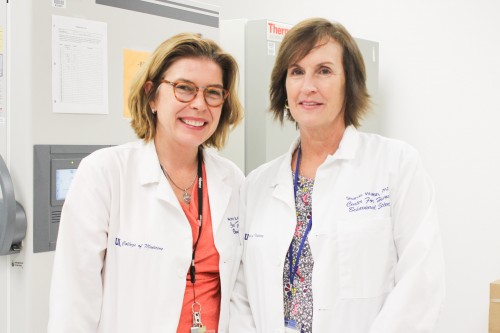 The study compared the performance of weekly and monthly CAM2038, with the current standard of care, a daily sublingual dose of buprenorphine/naloxone. Results showed the drug’s non-inferiority on the primary responder rate outcome, which was based upon highly sensitive urine testing detecting illicit opioids. The data suggests that injectable buprenorphine is efficacious and may have advantages. 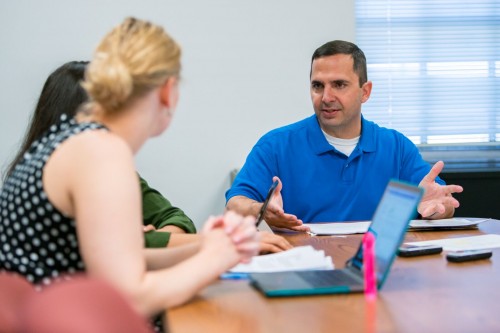 UK researcher Don Helme is partnering with the Kentucky Attorney General’s office to gauge public opinion on a new drug deactivation pouch, part of a larger effort to develop solutions to the state’s opioid epidemic. Four counties have received Deterra, the deactivation pouch.

Boldly Going Where No Plant Has Gone Before

Working with space commercialization company Space Tango, a team of UK College of Pharmacy researchers are studying the potential medicinal benefits of sending plants to space.

Everyone Dreads Hemorrhoid Surgery! A Study by Surgeons in Vermont Shows A Way to Change This

What a New Study Reveals About Selfies and Teenage Body Image

From Facebook and Twitter, to Instagram and Snapchat, it's no secret social media has become a common form of communication, but have you ever left your feeds feeling bad about yourself? If so, you’re not alone, according to a new study conducted by researchers at the University of Kentucky. 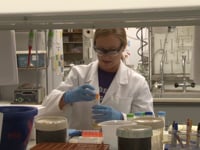 Lafora disease is an ultra-rare, congenital form of epilepsy; every patient diagnosed with it dies before they are 30. Research into the mechanisms of glycogen metabolism at the University of Kentucky show promise for treatments for this and perhaps other forms of epilepsy. 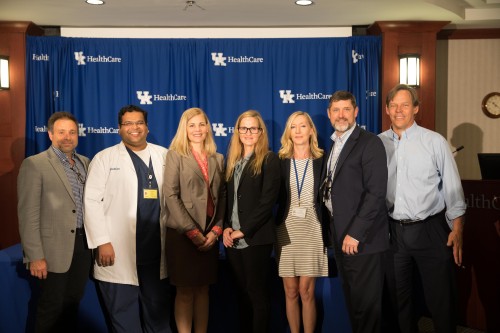 UK Receives $4.9 Million to Expand Program for Pregnant Women with Opioid Use Disorder in Rural Kentucky

In the study, funded with the PCORI contract, Dr. Agatha Critchfield, assistant professor of obstetrics and gynecology in the UK College of Medicine and medical director of PATHways, along with a multidisciplinary team, will compare two elements of the PATHways program in rural areas of Kentucky.

New findings from the University of Kentucky published in the Journal of Neuroscience demonstrate that there may be ways to address blood-brain barrier dysfunction in epilepsy. 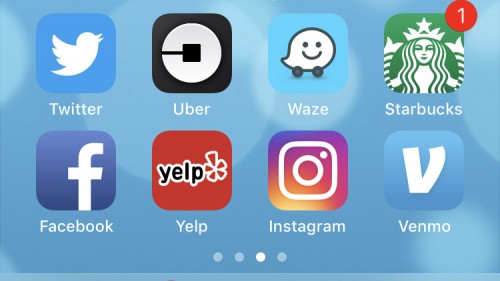 The Data Debacle: Many Unaware Researchers Study Their Social Media

If you're unaware that your tweets could be analyzed by researchers and published in studies without your consent, you're not alone. A majority of Twitter users don't know that researchers often gather and study their tweets according to a new study.

Clostridium difficile Infection: Which Surgical Patients Are at Highest Risk?