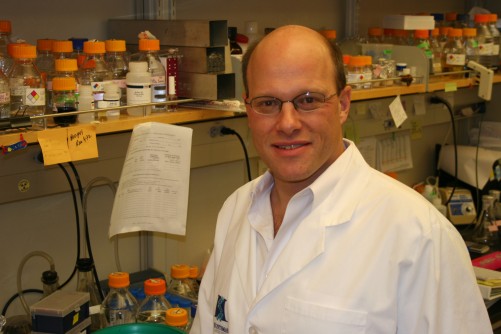 Don Ayer, PhD, an investigator at Huntsman Cancer Institute and a professor in the Department of Oncological Sciences at the University of Utah

According to senior author Don Ayer, Ph.D., an investigator at Huntsman Cancer Institute and a professor in the Department of Oncological Sciences at the University of Utah, many cancer cells, including triple negative cells, are addicted to the sugar glucose and the amino acid glutamine. “Normal cells do use glucose and glutamine,” he said, “but cancer cells use them at a very elevated rate and they actually become addicted to these nutrients and they are required for their growth.”

The researchers found that two proteins, one called Myc, the other called thirodoxin-interacting protein, or TXNIP, normally work in opposition to each other in cells in culture. Myc helps cancer cells take up and use glucose so they can grow and survive, while TXNIP blocks glucose uptake, limiting the growth-inducing functions of Myc. By contrast, in triple negative breast cancer cells, the researchers discovered that Myc reduces the expression of TXNIP. This increases glucose uptake, which supports the growth-inducing functions of Myc.

It may be possible to exploit this vulnerability in triple negative breast cancer, said Ayer. “From a therapeutic standpoint you could imagine that the cells that are addicted to these nutrients could be starved and killed more easily than normal cells.”

While this current study primarily focused on the role of Myc and TXNIP in triple negative cancer nutrient uptake and utilization, Ayer said the proteins also appear to play a role in metastasis, the process by which cancer cells spread to other parts of the body.

“What we discovered was that if tumors are taken from relatively young women, under age 53 with stage 1 or stage 2 breast cancer, and they have a high Myc, low TXNIP gene signature, these patients are more likely to have secondary metastasis later in life. We think this signature may be an early marker for metastatic disease.”

Ayer said that if this result is validated in clinical trials, then looking for the high Myc, low TXNIP signature will identify women at high risk for recurrence who could then be treated more aggressively and watched more closely.

Adam L. Cohen, M.D. and Alana Welm, Ph.D., from Huntsman Cancer Institute, were co-authors on this study. Other co-authors include Liangliang Shen from the State Key Laboratory of Cancer Biology, Department of Biochemistry and Molecular Biology, The Fourth Military Medical University in Xi’an China; and John M. O’Shea, Mohan R. Kaadige, Stephanie Cunha, and Blake R. Wilde from the Department of Oncological Science at the University of Utah Health Sciences.

About Huntsman Cancer Institute at the University of UtahHuntsman Cancer Institute (HCI) is one of the world’s top academic research and cancer treatment centers. HCI manages the Utah Population Database - the largest genetic database in the world, with more than 16 million records linked to genealogies, health records, and vital statistics. Using this data, HCI researchers have identified cancer-causing genes, including the genes responsible for melanoma, colon and breast cancer, and paraganglioma. HCI is a member of the National Comprehensive Cancer Network (a 23-member alliance of the world's leading cancer centers) and is a National Cancer Institute-Designated Cancer Center. HCI treats patients with all forms of cancer and operates several high-risk clinics that focus on melanoma and breast, colon, and pancreas cancers. The HCI Cancer Learning Center for patient and public education contains one of the nation's largest collections of cancer-related publications. The institute is named after Jon M. Huntsman, Sr., a Utah philanthropist, industrialist, and cancer survivor.