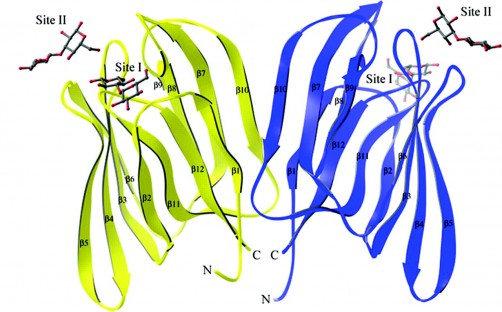 Three-dimensional structure of BanLec, lectin found in bananas identified by University of Michigan as potent inhibitor of HIV infection

Newswise — A potent new inhibitor of HIV, derived from bananas, may open the door to new treatments to prevent sexual transmission of HIV, according to a University of Michigan Medical School study published this week.

Scientists have an emerging interest in lectins, naturally occurring chemicals in plants, because of their ability to halt the chain of reaction that leads to a variety of infections.

In laboratory tests, BanLec, the lectin found in bananas, was as potent as two current anti-HIV drugs. Based on the findings published March 19 in the Journal of Biological Chemistry, BanLec may become a less expensive new component of applied vaginal microbicides, researchers say.

New ways of stopping the spread of the HIV are vitally needed. The rate of new infections of HIV is outpacing the rate of new individuals getting anti-retroviral drugs by 2.5 to1, and at present it appears an effective vaccine is years away.

“HIV is still rampant in the U.S. and the explosion in poorer countries continues to be a bad problem because of tremendous human suffering and the cost of treating it,” says study senior author David Marvovitz, M.D., professor of internal medicine at the U-M Medical School.

Although condom use is quite effective, condoms are most successful in preventing infection if used consistently and correctly, which is often not the case.

“That’s particularly true in developing countries where women have little control over sexual encounters so development of a long-lasting, self-applied microbicide is very attractive,” Markovitz says.

Some of the most promising compounds for inhibiting vaginal and rectal HIV transmission are agents that block the virus prior to integration into its target cell.

The new study describes the complex actions of lectins and their ability to outsmart the HIV virus. Lectins are sugar-binding proteins. They can identify foreign invaders, like a virus, in the body, and attach themselves to the pathogen.

The U-M team discovered Ban Lec, the lectin in bananas, can inhibit HIV infection by binding to the sugar-rich HIV-1 envelope protein, gp120, and block its entry to the body.

Co-authors Erwin J. Goldstein, Ph.D., professor emeritus of biological chemistry at U-M and Harry C. Winter, Ph.D., research assistant professor in biological chemistry at U-M, developed the biopurification method to isolate BanLec from bananas. Following their work, the U-M team discovered BanLec is an effective anti-HIV lectin and is similar in potency to T-20 and maraviroc, two anti-HIV drugs currently in clinical use.

Yet therapies using BanLec could be cheaper to create than current anti-retroviral medications which use synthetically produced components, plus BanLec may provide a wider range of protection, researchers say.

“The problem with some HIV drugs is that the virus can mutate and become resistant, but that’s much harder to do in the presence of lectins,” says lead author Michael D. Swanson, a doctoral student in the graduate program in immunology at the University of Michigan Medical School.

“Lectins can bind to the sugars found on different spots of the HIV-1 envelope, and presumably it will take multiple mutations for the virus to get around them,” he says.

Swanson is developing a process to molecularly alter BanLec to enhance its potential clinical utility. Clinical use is considered years away but researchers believe it could be used alone or with other anti-HIV drugs.

Authors say even modest success could save millions of lives. Other investigators have estimated that 20 percent coverage with a microbicide that is only 60 percent effective against HIV may prevent up to 2.5 million HIV infections in three years.