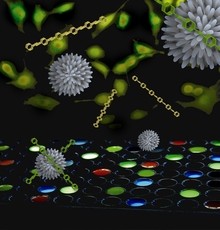 Nanoparticles and polymers were used to create a sensor that can %0Adistinguish between healthy, cancerous and metastatic cells.%0A

Newswise — Using a "chemical nose" array of nanoparticles and polymers, researchers at the University of Massachusetts Amherst have developed a fundamentally new, more effective way to differentiate not only between healthy and cancerous cells but also between metastatic and non-metastatic cancer cells. It's a tool that could revolutionize cancer detection and treatment, according to chemist Vincent Rotello and cancer specialist Joseph Jerry.

An article describing Rotello and colleagues' new chemical nose method of cancer detection appears in the June 23 issue of the journal Proceedings of the National Academy of Sciences online.

Currently, detecting cancer via cell surface biomarkers has taken what's known as the "lock and key" approach. Drawbacks of this method include that foreknowledge of the biomarker is required. Also, as Rotello explains, a cancer cell has the same biomarkers on its surface as a healthy cell, but in different concentrations, a maddeningly small difference that can be very difficult to detect. "You often don't get a big signal for the presence of cancer," he notes. "It's a subtle thing."

He adds, "Our new method uses an array of sensors to recognize not only known cancer types, but it signals that abnormal cells are present. That is, the chemical nose can simply tell us something isn't right, like a 'check engine light,' though it may never have encountered that type before." Further, the chemical nose can be designed to alert doctors of the most invasive cancer types, those for which early treatment is crucial.

In blinded experiments in four human cancer cell lines (cervical, liver, testis and breast), as well as in three metastatic breast cell lines, and in normal cells, the new detection technique correctly indicated not only the presence of cancer cells in a sample but also identified primary cancer vs. metastatic disease.

In further experiments to rule out the possibility that the chemical nose had simply detected individual differences in cells from different donors, the researchers repeated the experiments in skin cells from three groups of cloned BALB /c mice: healthy animals, those with primary cancer and those with metastatic disease. Once again, it worked. "This result is key," says Rotello. "It shows that we can differentiate between the the three cell types in a single individual using the chemical nose approach."

Rotello's research team, with colleagues at the Georgia Institute of Technology, designed the new detection system by combining three gold nanoparticles that have special affinity for the surface of chemically abnormal cells, plus a polymer known as PPE, or para-phenyleneethynylene. As the 'check engine light,' PPE fluoresces or glows when displaced from the nanoparticle surface.

By adding PPE bound with gold nanoparticles to human cells incubating in wells on a culture plate, the researchers induce a response called "competitive binding." Cell surfaces bind the nanoparticles, displacing the PPE from the surface. This turns on PPE's fluorescent switch. Cells are then identified from the patterns generated by different particle-PPE systems. Rotello says the chemical nose approach is so named because it works like a human nose, which is arrayed with hundreds of very selective chemical receptors. These bind with thousands of different chemicals in the air, some more strongly than others, in the endless combination we encounter. The receptors report instantly to the brain, which recognizes patterns such as, for example, "French fries," or it creates a new smell pattern.

Chemical receptors in the nose plus the brain's pattern recognition skills together are incredibly sensitive at detecting subtly different combinations, Rotello notes. We routinely detect the presence of tiny numbers of bacteria in meat that's going bad, for instance. Like a human nose, the chemical version being developed for use in cancer also remembers patterns experienced, even if only once, and creates a new one when needed.

For the future, Rotello says further studies will be undertaken in an animal model to see if the chemical nose approach can identify cell status in real tissue. Also, more work is required to learn how to train the chemical nose's sensors to give more precise information to physicians who will be making judgment calls about patients' cancer treatment. But the future is promising, he adds. "We're getting complete identification now, and this can be improved by adding more and different nanoparticles. So far we've experimented with only three, and there are hundreds more we can make."

A high-resolution image is available to accompany this story at www.umass.edu/newsoffice and also on the Newswise Web site.

Proceedings of the National Academy of Science online (23-Jun-2009)