Chemical Transport in Plants Likened to That of Humans 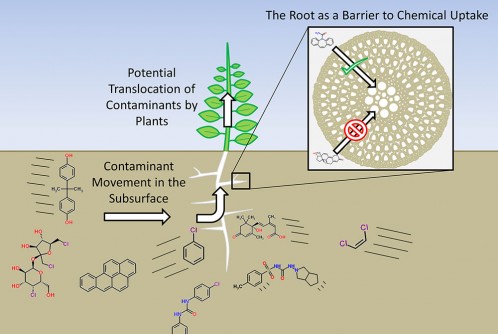 Newswise — ROLLA, Mo. – Plant roots and certain human membrane systems resist chemical transport in much the same way, say researchers at Missouri University of Science and Technology in a recent journal article. This similarity could make it easier to assess chemical risks for both people and plants, and may even lead to a new approach to testing medications.

“A plant’s root is similar to the blood-brain barrier and intestine of humans,” says Matt A. Limmer, a doctoral student in environmental engineering at Missouri S&T. “It’s amazing when you think about it — plants and animals evolved separately but somehow developed comparable structures to control transport of water and dissolved chemicals.”

These systems all act as barriers to outside substances, allowing some in and repelling others. A substance’s movement through a plant, or translocation, is measured by how efficiently it moves from the root to the plant’s shoot.

Considering the multitude of chemicals used in industry, testing each to determine how well it moves through a plant would be an exhaustive undertaking. Instead, using computer models, Limmer studied measurements of 110 compounds using 21 types of plants with a method originally applied to orally administered pharmaceuticals, Christopher A. Lipinski’s “rule of five.”

“Lipinski’s rule of five looks at the commonality of drugs that work,” says Limmer. “It shows that drugs are more likely to be absorbed by the human intestine if the compounds have five or fewer hydrogen bond donors, 10 or fewer hydrogen bond acceptors, and a molecular mass of less than 500, among additional similar constraints.”

Limmer says that this “rule of five” has successfully predicted the absorption, distribution, metabolism and excretion of compounds, and has been used to speed up the discovery of new drugs.

“These rules are popular because they’re so easy to implement and the parameters are easy to calculate,” he says. “In risk assessment we usually take a tiered approach. Our study would be a first pass: Does this chemical appear to pose a concern to the food chain? If so, we need to try something else or gather experimental data.”

Limmer’s findings have been published in the February 2014 issue of the journal Environmental Science & Technology Letters. His paper “Plant Translocation of Organic Compounds: Molecular and Physicochemical Predictors,” was co-authored by Dr. Joel B. Burken, professor of civil and environmental engineering and director of Missouri S&T’s Environmental Research Center. An online version of the paper is available at http://pubs.acs.org/doi/abs/10.1021/ez400214q.