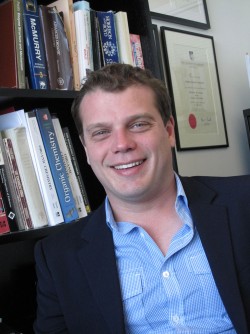 Gianneschi, a Northwestern alumnus, has developed new methods for creating nanomaterials that can sense and respond to biological signals. His work could lead to new approaches for the treatment of disease, through targeted drug delivery, tissue repair and advanced sensor design.

Gianneschi’s research program is focused on solving the problems of how synthetic materials interact with biological systems. In some cases, he and his group seek to mimic biological processes using synthetic systems, and in others, the researchers aim to use completely synthetic materials for therapeutic or diagnostic purposes against heart disease and cancer. The pioneering work involves the study of polymers and polymer-based nanoparticles as well as the development of new methods for analyzing nanomaterials with electron microscopy.

“Nathan’s innovative research transcends traditional disciplines, and we look forward to having him join the University and the IIN team,” Mirkin said.

Gianneschi will be a professor of chemistry in the Weinberg College of Arts and Sciences and a professor of materials science and engineering and of biomedical engineering in the McCormick School of Engineering. He also will be part of the International Institute for Nanotechnology and the Ronald and JoAnne Willens Nano Oncology Center.

“I’m very excited to join the faculty at Northwestern,” Gianneschi said. “I can think of no better place to do the kind of work my group is focused on, in terms of our efforts in basic materials chemistry and also how it applies to solving problems in biology. I very much look forward to new adventures, building new programs and working with new colleagues across the University.”

In addition to his laboratories in a new wing of the Technological Institute on Northwestern’s Evanston campus, Gianneschi also will have labs in the Louis A. Simpson and Kimberly K. Querrey Biomedical Research Center on the Chicago campus.

Currently, Gianneschi is the Teddy Traylor Faculty Scholar and Professor of Chemistry and Biochemistry, Materials Science and Engineering and NanoEngineering at the University of California, San Diego.

“Nathan is one of the most creative and energetic researchers in the application of nanoscience to medicine,” said Peter C. Stair, chair of Northwestern’s chemistry department and the John G. Searle Professor of Chemistry in Weinberg College. “As an organic chemist, he is a strong complement to Northwestern’s existing expertise in inorganic-based materials in nanoscience.”

“Nathan is a world-class researcher working at the cutting edge of nanotechnology and biomedicine,” said Eric J. Perreault, professor of biomedical engineering and chair of the department in the McCormick School and professor of physical medicine and rehabilitation at Northwestern University Feinberg School of Medicine. “His basic and translational research programs are complementary to many efforts within biomedical engineering at Northwestern, and we are enthusiastic about having him join our department.”

Gianneschi has received numerous honors during his career. They include Fellow of the Royal Society of Chemistry (2016), National Academy of Sciences Kavli Fellow (2013), recipient of the National Institutes of Health Director’s Transformative Research Award (2012), Alfred P. Sloan Foundation Fellow (2012) and recipient of the Presidential Early Career Award for Scientists and Engineers (2009).

Before joining the University of California, San Diego in 2008, Gianneschi was on a Dow Foundation Fellowship through the American Australian Association at The Scripps Research Institute, from 2005 to 2008. He studied semi-synthetic programmable enzymatic systems as selective, responsive elements in biomolecule detection and signal amplification.

Gianneschi, a native of Canberra, Australia, received his Ph.D. in chemistry in 2005 from Northwestern, where he studied with professors Chad Mirkin and SonBinh Nguyen. He received his B.Sc. in chemistry from the University of Adelaide in 1999.