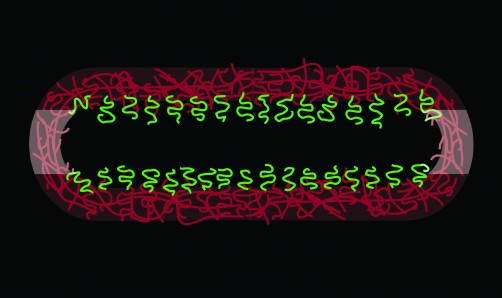 Sculpted from a special kind of molecule called a “bottle-brush molecule,” the traps consist of tiny, organic tubes whose interior walls carry a negative charge. This feature enables the tubes to selectively encapsulate only positively charged particles.

In addition, because UB scientists construct the tubes from scratch, they can create traps of different sizes that snare molecular prey of different sizes. The level of fine tuning possible is remarkable: In the Journal of the American Chemical Society, the researchers report that they were able to craft nanotubes that captured particles 2.8 nanometers in diameter, while leaving particles just 1.5 nanometers larger untouched.

These kinds of cages could be used, in the future, to expedite tedious tasks, such as segregating large quantum dots from small quantum dots, or separating proteins by size and charge.

Images of the bottle-brush molecule are available here: http://www.buffalo.edu/news/13057.

“The shapes and sizes of molecules and nanomaterials dictate their utility for desired applications. Our molecular cages will allow one to separate particles and molecules with pre-determined dimensions, thus creating uniform building blocks for the fabrication of advanced materials,” said Javid Rzayev, the UB assistant professor of chemistry who led the research.

“Just like a contractor wants tile squares or bricks to be the same size so they fit well together, scientists are eager to produce nanometer-size particles with the same dimensions, which can go a long way toward creating uniform and well-behaved materials,” Rzayev said.

To create the traps, Rzayev and his team first constructed a special kind of molecule called a bottle-brush molecule. These resemble a round hair brush, with molecular “bristles” protruding all the way around a molecular backbone.

After stitching the bristles together, the researchers hollowed out the center of each bottle-brush molecule, leaving behind a structure shaped like a toilet paper tube.

The carving process employed simple but clever chemistry: When building their bottlebrush molecules, the scientists constructed the heart of each molecule using molecular structures that disintegrate upon coming into contact with water. Around this core, the scientists then attached a layer of negatively charged carboxylic acid groups.

To sculpt the molecule, the scientists then immersed it water, in effect hollowing the core. The resulting structure was the trap—a nanotube whose inner walls were negatively charged due to the presence of the newly exposed carboxylic acid groups.

To test the tubes’ effectiveness as traps, Rzayev and colleagues designed a series of experiments involving a two-layered chemical cocktail.

When the scientists shook the cocktail for five minutes, the nanotubes collided with and trapped the dyes, bringing the dyes into the chloroform solution. (The dyes, on their own, do not dissolve in chloroform.)

In similar experiments, Rzayev and his team were able to use the nanotubes to extract positively charged molecules called dendrimers from an aqueous solution.

The nanotubes were crafted so that dendrimers with a diameter of 2.8 nanometers were trapped, while dendrimers that were 4.3 nanometers across were left in solution.

To remove the captured dendrimers from the nanotubes, the researchers simply lowered the pH of the chloroform solution, which shuts down the negative charge inside the traps and allows the captured particles to be released from their cages.

The research on nanotubes is part of a larger suite of studies Rzayev is conducting on bottle-brush molecules using a National Science Foundation CAREER award. His other work includes the fabrication of bottle-brush-based nanomembranes that could be adapted for water filtration, and the assembly of layered, bottle-brush polymers that reflect visible light like the wings of a butterfly do.

Related Stories:Nanomembranes Made From Bottle-Brush Molecules Could Filter Bacteria From Water: http://www.buffalo.edu/news/12288