Chengappa named the Distinguished Veterinary Microbiologist of the Year 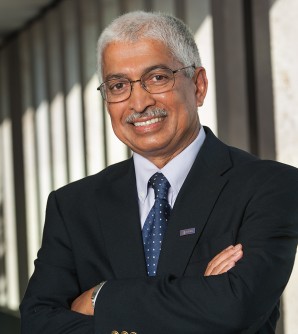 M.M. Chengappa, university distinguished professor of microbiology and head of the department of diagnostic medicine and pathobiology at Kansas State University.

"It's a great honor to be recognized with such a prestigious award, being the only award of this kind given to an individual in the U.S. and Canada," Chengappa said. "I'm honored and humbled by this recognition, and I'm quite thankful to the organization for recognizing me. I'm also thankful to the College of Veterinary Medicine at Kansas State and to Dean Ralph Richardson for giving me the opportunity to lead and work with a fine group of people in the college. I'm also thankful to Dr. T.G. Nagaraja for nominating me for this award."

"We're very proud of Dr. Chengappa in being recognized with this national award," Richardson said. "While he has been an excellent administrator for our college, it's easy to overlook the fact that he is a prominent international scientist who has made immeasurable contributions to the field of veterinary microbiology."

Chengappa is a diplomate the American College of Veterinary Microbiologists.

"Distinguished Veterinary Microbiologist is the highest recognition accorded to an individual by the American College of Veterinary Microbiologists," said Nagaraja, university distinguished professor of microbiology in the diagnostic medicine and pathobiology department. "I nominated Dr. Chengappa for this prestigious award not just because he has had a distinguished career and has made significant contributions in all aspects of veterinary microbiology-research, teaching and diagnostic services, but more importantly, because of the profound impact he has had in the academic careers and lives of a number of veterinary students, graduate students and faculty in the department."

Chengappa's primary research interests are studying and understanding the pathogenesis of important infectious diseases of animals, and developing strategies to protect animals from these diseases. Identification, molecular characterization and functional analysis of antigens/toxins of Streptococcus suis, Mannheimia haemolytica and Fusobacterium necrophorum are his primary research focuses. He also coordinates and teaches a course in veterinary microbiology for sophomore veterinary students.

The recipient of numerous awards, Chengappa earned the prestigious Beecham Award for Research Excellence from Kansas State University's College of Veterinary Medicine in 1990; the Distinguished Veterinary Postdoctoral Award from Michigan State University in 2004; and the Karuna Award for Outstanding Contributions to National and Global Progress from India in 2007. In 2003, he was received Kansas State's highest faculty ranking of university distinguished professor; and in 2011, he was received the university's Presidential Award for Outstanding Department Head.

He has authored or co-authored over 126 refereed publications and 130 abstract presentations, has five U.S. patents and has made numerous presentations as an invited guest speaker locally, regionally, nationally and internationally. Chengappa also has been involved in international activities mostly related to infectious diseases. He and G.R. Carter and A.W. Roberts wrote the textbook "Essentials of Veterinary Microbiology"; and with Carter, he wrote two books: "Microbial Diseases: A Veterinarian's Guide to Laboratory Diagnosis" and "Essentials of Veterinary Bacteriology and Mycology." He co-edited the recently released third edition "Veterinary Microbiology" with Scott McVey and Melissa Kennedy. In addition, Chengappa has advised 11 doctoral and master's students and postdoctoral fellows.

Chengappa is a member of several professional organizations, including the American Association of Veterinary Laboratory Diagnosticians, the American Veterinary Medical Association, the Conference of Research Workers in Animal Disease and the American College of Veterinary Microbiologists, where he was president of the board of governors in 2008-2010, vice president from 2004-2008, and served several terms on the organization's board. Additionally, he has served on several of its committees over the years.

Chengappa was a guiding force is helping ensure the parasitological specialty was approved within the American College of Veterinary Microbiologists. He also has served as a committee member and/or chair on several national, regional and university committees in many areas. Chengappa is an active member of the Conference of Research Workers in Animal Diseases, which he joined in 1990.

The American College of Veterinary Microbiologists is the specialty organization recognized by the American Veterinary Medical Association for certification of veterinarians with special expertise in microbiology. A diplomate of the organization is a veterinarian of good moral character who has satisfactorily completed the examination and has been elected to membership by a majority vote of the college's board of governors. Veterinary microbiology includes the fields of bacteriology, mycology, immunology, virology and parasitology as they apply to veterinary medical science.

The award was presented at the organization's annual meeting Dec. 8, 2013, in Chicago.