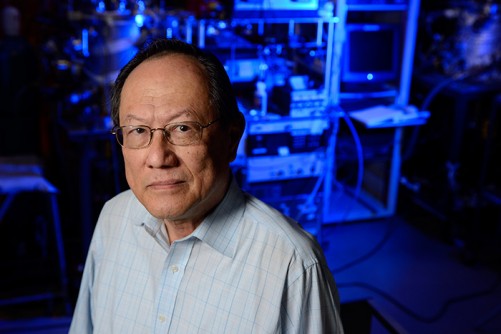 Chia-Ling Chien, a condensed matter physicist at Johns Hopkins University, has been honored for his magnetism research.

Newswise — Chia-Ling Chien, a condensed matter physicist at the Johns Hopkins University, has received the prestigious 2015 IUPAP Magnetism Award and Néel Medal from the Commission on Magnetism within the International Union of Pure and Applied Physics.

“I am delighted to receive the award,” said Chien, “which should be shared with my students and post-docs over the years.”

Chien, the Jacob L. Hain Professor and director of the Nanostructured Materials Lab in the university’s Department of Physics and Astronomy, was cited for pioneering discoveries in magnetic materials and nanostructures. The IUPAP Magnetism Award and Néel Medal are awarded every three years to a scientist who has made extraordinary contributions to the field of magnetism. The award is the highest honor bestowed by the IUPAP Commission on Magnetism.

Daniel Reich, chair of Johns Hopkins’ Department of Physics and Astronomy, praised Chien for his unique perspectives on magnetism’s challenges.

"Professor Chien has made a host of very important contributions to the field of magnetism over the past three decades,” Reich said. “He consistently has come up with new ways of approaching difficult problems, and has repeatedly carried out experiments that cut to the heart of the big scientific questions in our field."

Chien’s prolific impact on the field of magnetism can be seen in his more than 400 published journal articles, and over 18,000 citations with an H-index of 66. He has researched nearly every branch of magnetism from new exotic magnetic materials to giant magnetoresistance to superconductivity. Recently, Chien and his students explored pure spin current phenomena where spin information can be tracked and stored, while involving a minimum of, or no transport of charge-carrying particles. This has potential applications in advanced computer logic and memory.

The IUPAP Commission on Magnetism was established in 1957 to promote the exchange of information and views among the members of the international scientific community in the field of magnetism. The IUPAP Magnetism Award has been made every three years since 1991. Chien joins a distinguished group of prior recipients of the IUPAP Magnetism Award that includes spintronic materials pioneer Stuart Parkin, UC Berkeley Chancellor Emeritus Robert Birgeneau, and Nobel laureates Albert Fert and Peter Grünberg. Chien will receive his award at the 2015 International Conference on Magnetism in Barcelona this summer.