This map created by the Chicago Project on Suicide and Terrorism indicates the regions with the greatest intensity of suicide attacks during 2014. 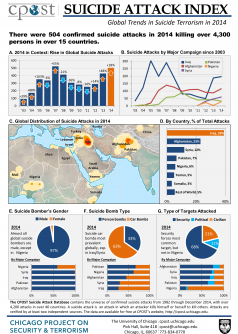 Newswise — A new report on global trends in suicide terrorism shows that during 2014 more than 4,300 people in more than 15 countries were killed in suicide bombings. Out of the 15 countries, Afghanistan and Iraq led the world last year in suicide attacks with an increase in Iraq.

The report shows that Iraq accounts for 40 percent of all such events in the world. “If you’re just following the news on a daily basis, you might have the idea that the entire world has suddenly been engulfed in terrorism and that somehow that was worse in 2014,” said Robert Pape, Prof. of Political Science and the founding faculty director of the Chicago Project on Security & Terrorism (CPOST), which published the report. But Pape said the data shows that the increase was limited to Iraq.

The CPOST 2014 Suicide Attack Index is the first one-year summary of suicide attacks that occurred across the world. Pape and his team of CPOST researchers compiled the index and accompanying report. They showed that the total number of confirmed attacks reached 504 in 2014.

CPOST research director Keven Ruby, PhD ‘12, said one surprise the report made clear is that the number of suicide attacks in Afghanistan has remained relatively constant for several years. “That’s particularly worrisome from a U.S. policy perspective,” said Ruby, “because the United States wants to withdraw militarily from Afghanistan, but there are no signs that the campaign by the Afghan Taliban is letting up.”

The CPOST index highlights key data on world hot spots for attacks and also shows that, with the exception of Nigeria, the majority of suicide bombers were males. The researchers also found that car bombs were the most prevalent weapons, and the targets were overwhelmingly security forces.

In 2004, Pape created CPOST, an international security affairs research institute at the University of Chicago. As its director, he heads a team of investigators, including several students, who track globally all suicide incidents. “We decided that we should do what nobody else is doing with these terrorism databases, and that is to put the information together on a single page to summarize what happened in the world of suicide attack last year,” said Pape. “We’re trying to set the standard for reporting this information.”

Fourth-year and research associate McIntyre Skarzynski is among the team of students who carefully investigate each suicide attack by gathering as much data as possible from a variety of sources. “We will have at least two independent news sources, usually more, plus documents from the terrorist organizations and government reports,” said Skarzynski.

“Each student has a different region of the world to track. We look at each attack to see whom the terrorists were attacking, how many people were killed, and where the attack was taking place. We’re constantly checking each other’s work to make sure the database is as accurate as possible,” Skarzynski added.

“We’re collecting information in the way a medical researcher might collect information on lung cancer,” said Pape. “Let’s call this the disease of suicide attack. We’re looking for specific risk factors for the deadliest threats we face from terrorism in the world.”

Pape and his CPOST team hope the information from the suicide attack index and report will be helpful to policy makers, academic researchers and journalists to put the data into context.

“We’re doing this to save lives,” said Pape. “We want to provide the best data in the world to develop better policies to save lives and to mitigate harm against bystander populations. If you have the wrong policy because you don’t have good enough data, you can actually cause more harm than good.”

Caption: This map created by the Chicago Project on Suicide and Terrorism indicates the regions with the greatest intensity of suicide attacks during 2014. 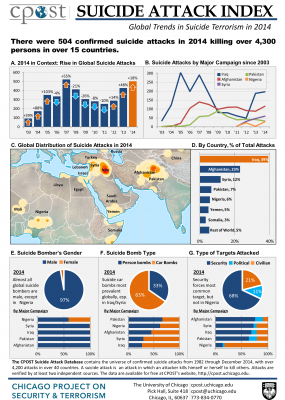