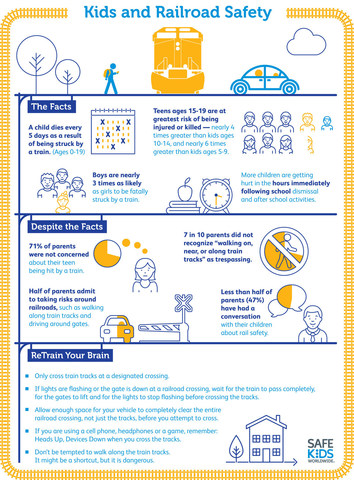 Newswise — Washington, D.C. –  A new research report released today by Safe Kids Worldwide finds that a majority of parents do not consider children being hit by trains to be a problem, despite the fact that every five days a child is killed in a train collision. This Rail Safety Week, September 22-28, Safe Kids Worldwide and Union Pacific Railroad are teaming up to increase awareness and educate families about how to be safe around train tracks.

The research report, Railroads: An Often Overlooked Danger to Children, highlights two main circumstances that result in tragedies: collisions at railroad crossings and trespassing. Nearly all of these incidents are preventable.

Railroad crossing collisions commonly occur when a driver is not paying attention near the tracks, when drivers or walkers choose to go around a safety barrier, or when they race to cross the track before the train passes. They may believe they have time to safely cross because they will see or hear an approaching train, or they think the train can stop for them. The reality is this: A train can take up to a mile to stop, so unlike an approaching car, it cannot stop for people on the tracks. By the time the locomotive engineer sees something on the track ahead, it is too late to stop.

Walking on or along the railroad tracks is trespassing. People may think it’s okay to take photos or just hang out, but they need to know that any trespassing is both dangerous and illegal. Today’s trains are not as loud as people believe; there is no clickety-clack sound, and there may not always be a horn to warn trespassers of an approaching train. Further, many people don’t realize a train is much wider than the tracks. The area around the tracks is private property and being on it is illegal.

“These new research findings reveal that many parents don’t realize the importance of addressing railroad safety. In fact, fewer than half of parents we surveyed say they have talked with their children about it and half of parents admit to taking risks around railroads,” said Torine Creppy, president of Safe Kids Worldwide. “We want to help parents get the little-known, but life-saving information they need to protect themselves and their kids.”

“Safe Kids Worldwide and Union Pacific are committed to creating a culture of safety around trains and railroad tracks,” said Erin Batt, assistant vice president and chief safety officer at Union Pacific Railroad. “We all need to work together to bridge the gap between the perceived and the real risks, so everyone goes home safely every day.”

For more information about protecting children from injuries, visit www.safekids.org.

Safe Kids Worldwide is a global nonprofit dedicated to protecting kids from preventable injuries, the number one cause of death to children in the United States. Around the world, a child dies every 30 seconds from an injury that could have been prevented. Safe Kids Worldwide is a go-to resource for families, offering practical information on preventing injuries caused by motor vehicle crashes, fires, falls, poisoning and other risks. Through more than 400 coalitions in the U.S. and partners in more than 30 countries, Safe Kids works with children’s hospitals, trauma centers, first responders and public health experts to get life-saving information to families. With a foundation of research, Safe Kids delivers on the mission through advocacy, education, programs and awareness efforts. Since 1988, Safe Kids has helped reduce the U.S. childhood death rate from unintentional injury by nearly 60 percent.

Union Pacific Railroad is the principal operating company of Union Pacific Corporation (NYSE: UNP). One of America's most recognized companies, Union Pacific Railroad connects 23 states in the western two-thirds of the country by rail, providing a critical link in the global supply chain. The railroad's diversified business mix is classified into its Agricultural Products, Energy, Industrial and Premium business groups. Union Pacific serves many of the fastest-growing U.S. population centers, operates from all major West Coast and Gulf Coast ports to eastern gateways, connects with Canada's rail systems and is the only railroad serving all six major Mexico gateways. Union Pacific provides value to its roughly 10,000 customers by delivering products in a safe, reliable, fuel-efficient and environmentally responsible manner.