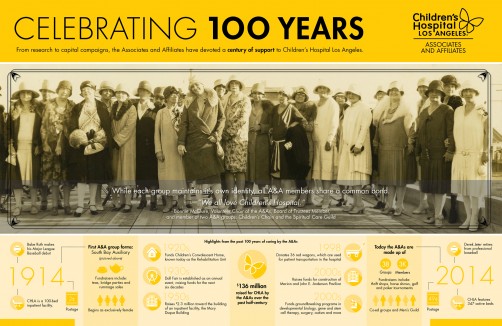 Newswise — LOS ANGELES (May 12, 2014) -- When the Associates & Affiliates of Children’s Hospital Los Angeles (CHLA) was formed in 1914, World War I was breaking out and Babe Ruth had just made his Major League Baseball debut. At CHLA, the doors had just opened to a new 100-bed inpatient pediatric facility at its present location.

Today, the Associates & Affiliates currently consist of 26 Associates groups and 12 Affiliates organizations that span north to the Antelope Valley, east to Whittier, south to Palos Verdes and west to Pacific Palisades. There is likely one in your community! The Associates raise funds individually which is then pooled together to support a common cause, such as the current campaign, the endowment of advancing developmental neuroscience which has just completed. Affiliate groups raise funds for separate projects, with some supporting research and others dedicating themselves to a hospital department or program. Over the past half-century alone, they have collectively raised more than $136 million—helping to build two major hospital buildings and funding multimillion-dollar campaigns for genetic research, minimally invasive surgery, developmental biology, resident education, multiple hospital departments and much more.

The A&As will commemorate a century of volunteer work with an “afternoon of gratitude” and the organization will be honored by CHLA at a private luncheon on Wednesday, May 14th in Los Angeles.

Longevity and SupportThe A&As play vital roles in funding projects, such as the construction of the Marion and John E. Anderson Pavilion, and are enduring champions of research by funding groundbreaking programs in developmental biology, gene and stem cell therapy, neuroscience, surgery, autism and more. “We all love Children’s Hospital Los Angeles,” says Bonnie McClure, volunteer chair of the A&As, member of the Board of Trustees and member of two Associates groups: Children’s Chain and the Spiritual Care Guild. “The members know that every dime they raise is being used to help make a sick child better. You won’t find a more dedicated and loyal group.”

HistoryIn Hermosa Beach, the hospital’s first auxiliary was formed under the direction of CHLA’s first president, Kate Page Crutcher. This small group of philanthropic-minded women who joined together in Hermosa Beach are now known as the South Bay Auxiliary. It marks the birth of what would become the most successful volunteer fundraising force of any pediatric hospital in the country. During Mrs. Crutcher’s tenure (1907-1946), she organized seven auxiliaries to help support Children’s Hospital, which then operated entirely on donations.

Mary DuqueAfter becoming chair of the A&A Committee in 1947, she set the foundation of organizational structure for the A&As, and became the hospital’s preeminent fundraiser for the next 40 years. Mrs. Duque expanded the seven Auxiliaries to 24 Guilds and eight Affiliates. The newly increased force of the Auxiliaries, Guilds and Affiliates was greatly felt in the 1950s as the groups raised $2.3 million for a new hospital inpatient facility—a staggering amount at the time. “This has been the most successful and productive year the Auxiliaries, Guilds and Associate Groups have ever experienced,” said Shannon Crandall, president of Children’s Hospital Los Angeles from 1955 to 1961. The building, which opened in 1968 and still serves patients today, was dedicated to the A&As and named after Mrs. Duque herself. Duque was succeeded as chairman by Anne O’Melveny Wilson, who the A&As from 1990 to 2002. “She was a single-focused champion of the Associates and Affiliates,” says Bonnie McClure, volunteer chair of the A&As since 2002 and a member of the Board of Trustees and a member of two Associate groups: Children’s Chain and Spiritual Care Guild. “She understood that members needed to feel a strong sense of personal involvement and individual responsibility. To this day, that sense of connection continues.”

“The Associates and Affiliates have been and continue to be absolutely essential to the growth and development of Children’s Hospital Los Angeles,” says Cathy Siegel Weiss, co-chair of the hospital’s Board of Trustees. “In honor of Mary Duque’s triplicate expressions, I want to say ‘Thank you, thank you, thank you’ to the Associates and Affiliates for a century of support and tireless dedication to the hospital’s mission,” Siegel Weiss says.

About Children's Hospital Los AngelesChildren's Hospital Los Angeles has been named the best children’s hospital on the West Coast and among the top five in the nation for clinical excellence with its selection to the prestigious U.S. News & World Report Honor Roll. Children’s Hospital is home to The Saban Research Institute, one of the largest and most productive pediatric research facilities in the United States. Children’s Hospital is also one of America's premier teaching hospitals through its affiliation since 1932 with the Keck School of Medicine of the University of Southern California.