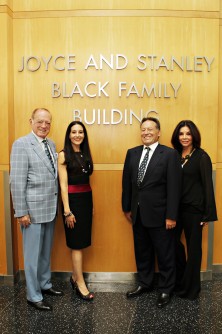 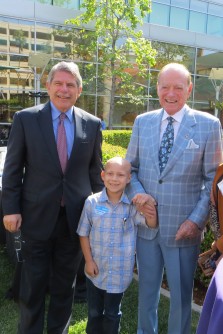 Maximo Bautista, 7, is joined by Los Angeles County Supervisor Zev Yaroslavsky (left) and philanthropist Stanley Black at the celebration of the unveiling of the Joyce and Stanley Black Family Building at CHLA

Newswise — Backed by a drum roll and an enthusiastic crowd of trustees, physicians and patient families, CHLA unveiled the new Joyce and Stanley Black Family Building in honor of the Black family’s $15 million gift to CHLA.

“Throughout our 57-year marriage, Joyce would always tell me the story of how Children’s Hospital Los Angeles saved her hearing when she was a 7-year-old patient here,” philanthropist Stanley Black told the crowd, referring to his wife’s surgery to treat mastoiditis, an extremely severe ear infection that almost left her permanently deaf and years ago was a leading cause of child mortality. “She always said we needed to help Children’s Hospital Los Angeles, because they helped her.”

The Joyce and Stanley Black Family Building, formerly the Gateway Building, is the entry point to the entire hospital campus and houses the Burtie Green Bettingen Surgery Center, the Blood Donor Center, Patient Admitting and the Cheryl and Haim Saban Story Center. It also welcomes more than 1.3 million visitors with a beautiful interior that was designed by Walt Disney Imagineers. The building overlooks the Joyce and Stanley Black and Family Healing and Meditation Garden — made possible by another generous donation by Joyce and Stanley in 2004.

The family name is now prominently displayed in two new areas of the hospital: The top of the former Gateway Building that overlooks the healing garden and Sunset Boulevard, and indoors nearby the information desk, the official entrance to the Joyce and Stanley Black Family Building.

Black was recognized by hospital leaders, Los Angeles County Supervisor Zev Yaroslavsky and an aide for Los Angeles Mayor Eric Garcetti, Yeghig Keshishian, who read a proclamation from the city. There was another special guest, Maximo Bautista, a 7-year-old from Oxnard who, like the late Joyce Stanley, was treated for mastoiditis at CHLA. Max was introduced at the ceremony by CHLA Board of Trustees Co-chair, Cathy Siegel Weiss. “I liked talking to Stanley, because he was very friendly,” said Maximo, who attended with his mom, dad and brother.

While most cases of mastoiditis today can be treated with antibiotics, Max had a severe case and he didn’t display an ear infection when he fell ill in early December and was hospitalized nearby his Oxnard, Calif. home. On December 17, he was airlifted to CHLA and underwent an emergency mastoidectomy surgery the next morning.

Max remained in the hospital for two months and underwent several of procedures and surgeries to deal with complications resulting from the mastoiditis. Today, Max is back home, though he is due back at CHLA for one more surgery later this year. In all, physicians and surgeons from five CHLA divisions have provided care for Max. “I was grateful that CHLA had all the doctors under one roof who could help my son,” says mom Graciela. “Everyone – from the doctors, nurses and to the Child Life team – did a wonderful job with Max.”

About Children’s Hospital Los Angeles:Children's Hospital Los Angeles has been named the best children’s hospital in California and among the best in the nation for clinical excellence with its selection to the prestigious US News & World Report Honor Roll. Children’s Hospital is home to The Saban Research Institute, one of the largest and most productive pediatric research facilities in the United States. The hospital is also one of America's premier teaching hospitals through its affiliation since 1932 with the Keck School of Medicine of the University of Southern California. 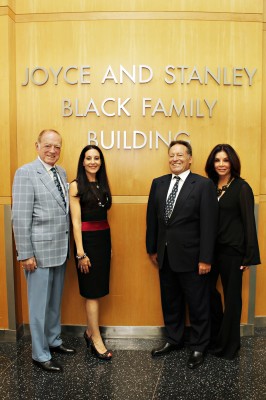 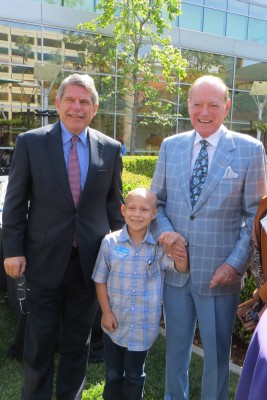 Caption: Maximo Bautista, 7, is joined by Los Angeles County Supervisor Zev Yaroslavsky (left) and philanthropist Stanley Black at the celebration of the unveiling of the Joyce and Stanley Black Family Building at CHLA