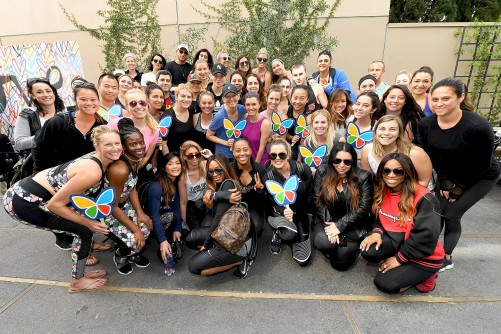 Newswise — LOS ANGELES (May 8, 2017) –Children’s Hospital Los Angeles announced today that its annual Make March Matter ™ campaign raised $1.7 million. For the second consecutive year, the month-long initiative exceeded its $1 million fundraising goal thanks to partnerships with more than 100 businesses in Los Angeles and the Coachella Valley who rallied community participation to give in support of critical, lifesaving care for children in Los Angeles.

“We are grateful for the incredible level of support we received from local and regional businesses to give back. These partners inspired their patrons to help us fulfill our mission of creating hope and building healthier futures for our patients and their families,” says Paul S. Viviano, president and chief executive officer of Children’s Hospital Los Angeles (CHLA). “I want to thank the people of Los Angeles and the Coachella Valley for supporting the campaign to benefit the health of children in our community.”

“The Make March Matter campaign was designed to unite our community’s businesses and their supporters to bring awareness to the health care needs of children, and to raise funds to maintain the more than 350 specialty programs and services that CHLA offers,” explains Dawn Wilcox, vice president corporate partnerships at CHLA. “This year we were proud to work with businesses across Southern California including the Coachella Valley and hope to expand next year’s campaign even further throughout the region.”

Make March Matter was created by CHLA as a way to identify a time of year devoted specifically to children’s hospitals and children’s health. The month of March was selected as it signifies the start of spring. And with the new season comes a feeling of hope, new beginnings, and life.

Highlighting this year’s campaign were numerous promotions and events held throughout the month including a shopping event at Neiman Marcus in Beverly Hills, a block party at The Point in Manhattan Beach and a special CHLA night at Staples Center with the Los Angeles Clippers. Drybar donated $1 from every blowout across their LA County stores (more than 38,000 blowouts in March!), Violet Grey sold specially curated beauty kits, Carl’s Jr. encouraged their customers to donate at the register and teen fashion designer Grace Rose donated a portion of sales from her Rosie G clothing line. For the second year in a row, Alfred Coffee donated one dollar to the campaign each time a customer posted a photo of one of their coffee cups on Instagram with the #MakeMarchMatter hashtag.

Corporate partner Panda Express, a longtime CHLA supporter, was the campaign’s top fundraiser, raising more than $380,000. “Giving is one of Panda’s core values, and we are proud supporters of the wonderful work that CHLA does for our community,” says Peggy Cherng, Panda Express co-chair and co-chief executive officer. “Our Panda family and guests in the Los Angeles area came together to raise over $380,000 through our annual associate giving campaign and in-store donations during the month of March for CHLA.”

The Southern California businesses that participated in this year’s Make March Matter campaign include:

Fitz in the AM

Half & Half Tea House

Lil’ Simmzy’s on the Deck

No Rest for Bridget

“We continue to be inspired by the commitment and generosity from so many businesses and the community,” Wilcox says. "This year we had dozens of new companies and partners join us and together with the support of our employees, Trustees, and patient family ambassadors we were able to truly Make March Matter.”

Make March Matter is an annual fundraising campaign that builds awareness and support for children’s health in Los Angeles. The campaign supports Children’s Hospital Los Angeles—a nonprofit pediatric hospital dedicated to offering more than 350 programs and services to help the health of children. The goal of the campaign is to raise money in support of the Helping Hands Fund, which helps Children’s Hospital Los Angeles ensure that all of its pediatric patients receive the critical lifesaving care they need.

Children’s Hospital Los Angeles is dedicated to creating hope and building healthier futures for children. Founded in 1901, CHLA is one of the nation’s leading pediatric academic medical centers and is acknowledged worldwide for its leadership in pediatric and adolescent health. The hospital relies on the generosity of the community to support its groundbreaking pediatric research and the complex care it provides for critically ill and injured children.