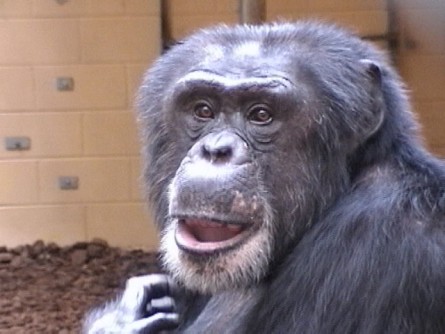 Sherman is one of three chimpanzees that was given a series of computerized tests of their memory in a study about metacognition. The study found chimpanzees are capable of metacognition, or thinking about one’s own thinking, and can adjust their behavior accordingly.

Newswise — ATLANTA—Chimpanzees are capable of metacognition, or thinking about one’s own thinking, and can adjust their behavior accordingly, researchers at Georgia State University, Agnes Scott College, Wofford College and the University at Buffalo, The State University of New York have discovered.

Their findings, published June 6 in the journal Cognition, suggest chimpanzees share with humans the capacity for metacognitive monitoring, which reflects a form of cognitive control that underlies intelligent decision-making across species.

Metacognition occurs when individuals monitor what they know and don’t know, when they seek information they need to know and when they respond to a question with high confidence or low confidence. Confidence measures are one clear means of looking at how humans monitor their own knowledge states. Humans can orally report confidence or lack of confidence or even use numerical ratings scales. They also can give confidence ratings through non-verbal behaviors such as shoulder shrugs, hesitations in responses and similar behaviors.

In the study, three chimpanzees were given a series of computerized tests of their memory. The researchers could manipulate how strong or weak the chimpanzees’ memories would be when they completed the test by varying the kinds of things they needed to remember and how long they needed to remember them. After each memory test, there was a short delay before the computer program gave feedback about whether the answer given by the chimpanzees was correct or incorrect.

A few seconds later, if the answer was correct, a food reward was delivered. The critical aspect of this study was that rewards were delivered away from where the chimpanzees worked on the memory test. If the chimpanzees had not moved to that location when rewards were delivered, the rewards were lost and could not be recovered. This meant the chimpanzees had two options after giving an answer to the memory test. They could either wait to hear whether the answer was correct or incorrect, and if correct, they were forced to hurry to the reward delivery location. Or, they could move to the reward location early before any feedback was provided.

The research team, which consisted of Beran, Audrey Parrish and Theodore Evans of Georgia State, Dr. Bonnie Perdue of Agnes Scott College, Sara Futch of Wofford College and Dr. J. David Smith from the University at Buffalo, The State University of New York, considered these early movements to the reward area as indications of the chimpanzees’ confidence in their responses to the memory test.

“The team’s approach was to think about what chimpanzees might naturally do in the wild that requires them to reflect on their knowledge and then act confidently or perhaps hesitate before moving,” Beran said.

For example, leaping from one branch to another without hesitation could suggest a chimpanzee knew it would clear the gap between those branches. Or a long, but direct, travel path to a tree with ripe fruit on it could suggest the chimpanzees were confident food would be there. The research team’s goal was to create an analogous situation in the laboratory, using computerized tests of memory and confidence.

Across the series of experiments, the chimpanzees consistently showed they monitored the strength of their memories and acted accordingly. They were much more likely to move to the reward area early, before they had any feedback from the computer program, when they gave correct answers than when they gave incorrect ones.

“They did not have to do this,” Parrish said. “The computer would always tell them whether they were right or wrong, but by moving early when they knew they were right, they got a head start toward retrieving their reward.”

The team concluded that these results, along with others, touch on the idea that chimpanzees share with humans the capacity for metacognitive monitoring. Although this capacity does not mean chimpanzees have the same conscious experiences humans can have when they act metacognitively, it does reflect a form of cognitive control that underlies intelligent decision-making across species. The next step in this research is to explore whether other primate and non-primate species show the same capacities, in addition to studying exactly what kinds of other tests might also prompt the chimpanzees to “go when they know.”

The study is supported by the National Institutes of Health and National Science Foundation.