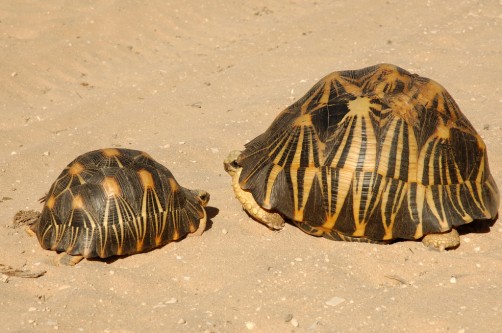 Newswise — Seven defendants who were engaged in smuggling radiated tortoises from Madagascar into China were sentenced to prison terms, according to WCS (Wildlife Conservation Society), which praised Guangzhou Intermediate Court’s July 26th verdict. The entire criminal network – from overseas accomplices to Chinese buyers – was targeted and dismantled, sending a serious warning to other would-be illegal traders.

Listed in CITES Appendix 1, the critically endangered radiated tortoise is native to Madagascar but is popular globally in the illegal pet trade. The defendants smuggled the animals on multiple occasions in 2014, with the ultimate goal of breeding them in China to sell for profit.

The sentences included an 11-year prison term for the leader of the operation and a 5-year term to an airport employee who facilitated the smuggling. Furthermore, the two were fined USD 75,103 and USD 7,510, respectively, in addition to having their illegal profits confiscated.

"This sentencing sends a strong message to illegal wildlife dealers that the punishment for these activities will fit the severity of the crime,” said Brian D. Horne, WCS Coordinator of Tortoise and Freshwater Turtle Conservation. “WCS is glad to have provided chelonian expertise for the prosecution.”

The airport employee, who worked at Guangzhou Baiyun Airport, received a favorable prison term for cooperating with the authorities and providing information leading to the arrests of other persons involved. Sentences for the other defendants ranged from 21 months to 7 years.

The smuggling operation consisted of individuals who illegally harvested the animals in Madagascar and then transported them on a commercial flight to mainland China. In an effort to prevent x-ray detection, the animals were wrapped in tin foil prior to transport.

Once the plane landed, the turtles were given to the airport employee, who used his credentials to avoid a customs inspection. The animals were taken to a specially equipped apartment in Guangzhou that was used as a temporary shelter and reproduction facility before being offered for sale through online forums and messaging groups.

On February 3rd of 2015, after receiving the animals in an airport restroom, the airport employee was caught with two knapsacks containing 316 tortoises. Subsequently, all members of the gang were arrested, including several buyers from Beijing and Guangxi, and 130 additional tortoises were rescued.

“Through the arrest and sentencing of these smugglers, many radiated tortoises were saved—both directly through the confiscation of the animals, and by the message sent by the sentencing,” said Aili Kang, Executive Director of WCS’s Asia Program. “These deterrents are necessary if we are going to protect the natural heritage of our global communities.”

In China, WCS provides an extensive network of capacity building and expert support services to empower law enforcement agencies in the fight against illegal wildlife trade. This is possible thanks to the support from the blue moon fund, the Liz Claiborne and Art Ortenberg Foundation, and the Critical Ecosystem Partnership Fund.

The Critical Ecosystem Partnership Fund is a joint initiative of l’Agence Française de Développement, Conservation International, the European Union, the Global Environment Facility, the Government of Japan, the MacArthur Foundation and the World Bank. A fundamental goal is to ensure civil society is engaged in biodiversity conservation.