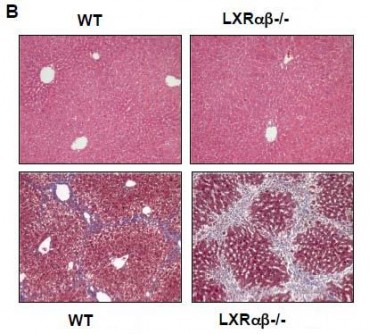 “Treated with a control substance, livers from normal and LXR-deficient mice appear identical and undamaged (top left and right). The bottom images show the greater degree of fibrosis (blue bands) in the livers of mice lacking LXRs (right) compared to normal mice (left) after liver injury.”

Newswise — UCLA researchers have demonstrated that a key regulator of cholesterol and fat metabolism in the liver also plays an important role in the development of liver fibrosis — the build-up of collagen scar tissue that can develop into cirrhosis. Cirrhosis, in turn, is a major cause of premature death and is incurable without a liver transplant.

Published in the March issue of the journal Gastroenterology, the study shows that liver X receptors (LXRs), master regulators of cholesterol, fat and inflammatory gene expression, also control the fibrosis-making cells of the liver, known as hepatic stellate cells.

In the face of chronic liver injury — due to excess fat, chronic viral hepatitis or alcohol abuse, for example — stellate cells become activated and launch an inflammatory and fibrotic cascade that eventually results in the build-up of collagen scar tissue in the liver.

LXRs, when stimulated, "turn on" several hundred genes that hold instructions to create proteins for carrying out bodily processes in cells, from transporting and excreting cholesterol to synthesizing fat in the liver. They have also been shown to suppress inflammatory processes in several contexts.

"Our work sets the stage for looking at new ways to modulate cholesterol and/or fat metabolism in order to have therapeutic potential for the treatment of fibrosing liver diseases," said lead author Dr. Simon Beaven, an assistant professor of digestive diseases at the David Geffen School of Medicine at UCLA.

The research was done in the laboratory of senior author Dr. Peter Tontonoz, a professor of pathology and laboratory medicine at the Geffen School of Medicine and a Howard Hughes Medical Institute investigator.

Beaven noted that the recent rise in obesity has resulted in a surge in the prevalence of a condition known as fatty liver, which can be a precursor to fibrosis and chronic liver disease. Simple fatty liver, also known as non-alcoholic fatty liver disease, or NAFLD, is one of the most common reasons patients consult a liver doctor in the United States. Cirrhosis due to fatty liver is skyrocketing and within a decade may become the most common indication for liver transplantation.

Beaven said the need to find better treatments for liver disease is crucial.

"A 'holy grail' for liver researchers is to develop anti-fibrotic treatments that target activated stellate cells in order to slow or prevent the development of cirrhosis," Beaven said. "Our study offers the first detailed look at how LXRs specifically impact the activation of hepatic stellate cells and the subsequent development of liver fibrosis in animal models."

UCLA researchers have found that LXRs normally play a role in helping to reduce the collagen-producing actions of stellate cells when the cells are "activated" by liver damage. For the study, UCLA scientists first tested how activated stellate cells taken from mice would react when a chemical that induces LXR activity was added to the cell culture.

In stellate cells from normal mice, LXRs suppressed the inflammatory and fibrosis-promoting program. But in those taken from mice genetically lacking LXRs, that same program of genes significantly increased because the inhibitory effect of LXRs was no longer present.

To further gauge the strength of the response, scientists took the medium from the cultures of LXR-deficient cells and added it to stellate cells from normal mice. These cells then showed a markedly exaggerated inflammatory and collagen-producing response, suggesting that LXR-deficient stellate cells are secreting signals to promote fibrosis.

The researchers noted that these experiments demonstrate that LXRs control a fibrotic response in stellate cells that can have a wide influence on neighboring cells.

But LXRs are also known to have important functions in the immune system. The researchers then wanted to know whether the effects they were seeing in animals were due to changes in stellate cell activity specifically or whether immune cells — derived from bone marrow — accounted for most of the effect. After extensive testing, the researchers found no differences in the level of liver fibrosis among normal mice and animals lacking LXRs, suggesting that the contribution from the immune system was negligible.

"This finding, along with the cell culture studies, suggests that LXRs' influence on fibrosis most likely resides in altering stellate cell function in the liver," Beaven said. "This is a critical finding and opens an entire new field of study for stellate cell biologists."

Additional studies will further identify which genes in stellate cells are activated by LXRs and help researchers better understand the role of cholesterol metabolism in the fibrotic response.

Other study authors included senior investigator Dr. Peter Tontonoz of the Howard Hughes Medical Institute; Kevin Wroblewski and Cynthia Hong from Tontonoz's lab; Jiaohong Wang and Hide Tsukamoto of the Southern California Research Center for ALPD and Cirrhosis, USC's Keck School of Medicine and the Department of Veterans Affairs Greater Los Angeles Healthcare System; and Steven Bensinger of the department of pathology at the David Geffen School of Medicine at UCLA.