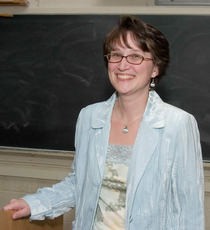 Lynn S. Neal's book, "Romancing God: Evangelical Women and Inspirational Fiction," was recently published by the University of North Carolina Press. It looks at the role Christian romance novels play in sustaining readers' faith. Neal is an assistant professor in the Department of Philosophy and Religion at Appalachian State University.

Newswise — Lynn S. Neal turned a few heads with her choice of a dissertation topic while in graduate school at UNC Chapel Hill.

Her decision to study the popularity of Christian romance novels would end her academic career before it began, many believed, saying her topic was not appropriate for a serious scholar.

But Neal was interested in the day-to-day living of those who consider religion an important part of their lives. She followed her instincts, and what began as a dissertation thesis has evolved into her book "Romancing God: Evangelical Women and Inspirational Fiction," recently published by the University of North Carolina Press.

Neal is an assistant professor in the Department of Philosophy and Religion at Appalachian State University. Her 232-page book explores the role Christian romance novels play in the lives of evangelical Christians.

During the course of 13 months, Neal interviewed 20 authors and 50 women readers, asking them how they got started reading the genre and how it related to their spiritual lives.

She found that while many women read for fun or for escape, they narrowly define "reading for fun" within evangelical Christianity. They are not going to R-rated movies or reading Harlequin romances.

"They believe their leisure time should reflect their religious beliefs," Neal said. "They are permeating their life with activities that reinforce"not challenge"their belief system," Neal said. "Their choice of reading material reflects their desire to uphold that faith and have it strengthened."

The women also read with a critical eye. "The stereotype of the formula fiction reader is that they aren't very critical readers," she said. "These women are picky. They are evaluating the theological content of the book and the writing style. And they are particularly concerned about the sexuality in the books. The door closes at the bedroom in a Christian romance novel. It doesn't go into the detail you would get in the mass- market romance novel."

Many women who write Christian romance novels consider them a form of ministry. They believe they have been called by God to write the novels, and they hope to convert people through their writing and help women maintain their faith, Neal said.

"What I discovered, is that even though the choice to read this genre emerges from Christianity, readers need something to help them maintain their faith," Neal said. "So even though there is a firm commitment to their religion, there are gaps in living that faith in daily life. That's what really got me excited about the project. You can really see how these readers are trying to live their religion and how these novels help them do it."

Readers told Neal that the heroines in the novel inspire them to better their spiritual lives, to forgive, pray, trust God or read the Bible more. "It's a fascinating cycle of faith, of the tensions in living out faith and continually seeking to strength their faith," she said.

Many critics tend to dismiss the genre for its reinforcement of traditional male and female gender roles, which misses the point, Neal said. "It's unrealistic to expect these women to want to escape from their belief system. If we are going to study religion and take religion seriously, we need to understand how they are keeping their faith alive and how they are continually creating a religious identity that sustains them in the face of the difficulty and drudgery that life can be at times," she explained. "What I ultimately concluded is that they are re-envisioning God through these romance novels," Neal said. "The romance novels are a pale reflection of how God unconditionally loves them and humanity, which builds to the ideal of God as the great romancer -- the lover who never gives up."