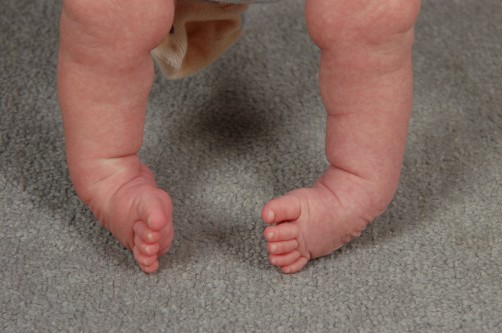 A baby with clubfoot in both feet prior to treatment. 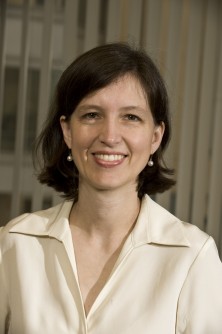 Newswise — Although clubfoot is one of the most common congenital birth defects, few genetic causes have been found. Now, researchers at Washington University School of Medicine in St. Louis have found what they believe to be the most common cause of inherited clubfoot yet discovered.

By performing a routine genetic screening on 66 patients with an inherited form of clubfoot, Christina Gurnett, MD, PhD, a Washington University pediatric geneticist and neurologist at St. Louis Children’s Hospital, and her colleagues found abnormalities in a region of chromosome 17 in four patients. Three of the patients had small recurrent DNA duplications, and one had a small recurrent DNA deletion on chromosome 17.

“What we’re learning about birth defects is that for some genes involved in very early fetal development, if you have either too much or too little of them, you may develop the same condition,” Gurnett says. “This appears to be the case for clubfoot.”

The results will be published in the July 9 issue of the American Journal of Human Genetics.

The researchers ran a test commonly used to evaluate children for neurodevelopmental disorders such as autism called a chromosomal microarray. Gurnett, assistant professor of neurology, of pediatrics and of orthopaedic surgery, said this is the first time researchers have used this kind of test specifically for isolated clubfoot.

“Since few genes have previously been implicated in clubfoot, this discovery represents the most common cause of isolated clubfoot found to date,” Gurnett says. “This technology can be used immediately for genetic testing.”

Nearly one in 1,000 babies is born with clubfoot and one-fourth of them have a family history of the birth defect, which causes the bones and joints of the foot to be aligned incorrectly. The condition occurs in boys twice as often as in girls. If untreated, those affected walk on the outside of their feet, which can lead to long-term pain and disability. Standard treatment for milder forms of clubfoot involves gentle manipulation and casting of the feet over several weeks then wearing a brace for several years. Treatment for more severe forms requires surgery.

Initially, Gurnett and her research team, including Matthew B. Dobbs, MD, associate professor of orthopedic surgery at the School of Medicine, screened the DNA of 40 patients with inherited clubfoot. Two were found to have nearly identical DNA duplications on chromosome 17 in a region previously linked to limb abnormalities, developmental delays and heart defects. That DNA duplication was not found in the DNA of 700 control subjects without clubfoot.

They then screened 26 additional patients and found another clubfoot patient with a duplication in chromosome 17 and one more with a deletion, resulting in four patients of 66 screened with defects on chromosome 17.

Dobbs says the findings may prompt orthopedic surgeons to consider this readily available genetic screening test for children who have inherited clubfoot and may be at risk of hip abnormalities.

“Our findings are significant in that they were present in 6 percent of familial clubfoot cases tested and were associated with clubfeet that were rigid and prone to a difficult treatment course,” Dobbs says. “Hip abnormalities, including hip dysplasia, were also seen in some of the patients. These genetic findings may allow orthopedic surgeons to better predict response to clubfoot treatment and also to identify a clubfoot patient group that may need careful hip screening as well.”

In a 2008 study, Gurnett and Dobbs found that a mutation in PITX1, a gene critical for early development of lower limbs, was linked to clubfoot in humans. That was the first gene implicated as a cause of the birth defect, and Gurnett said it appears to be related to the abnormalities they have now found on chromosome 17.

“There are two genes known to be involved in limb development that are located within the chromosome 17 region,” Gurnett says. “The PITX1 gene happens to turn on one of these genes, TBX4. Both genes play a role in leg development, but are not involved in development of the arm, explaining why clubfoot only affects the leg. We’re starting to understand the genetic pathway by which clubfoot develops, and we think that it is an abnormality of very early limb development, probably in the first trimester of pregnancy.”

While TBX4 is the most likely candidate in the chromosome 17 region linked to clubfoot, Gurnett said more research and data are needed.

“We may be hitting the tip of the iceberg,” she says. “Now that we have identified a particular gene abnormality these patients have in common, we are looking at X-rays of the feet and other bones to obtain more clues about what’s going on in these and other patients.”

They are now screening DNA from 1,000 patients with clubfoot to look for additional DNA duplications or deletions on chromosome 17. 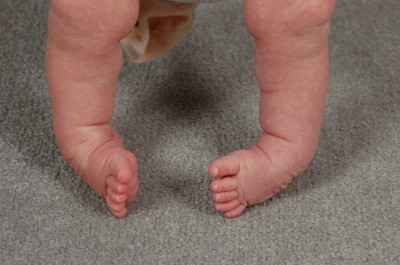 Caption: A baby with clubfoot in both feet prior to treatment. 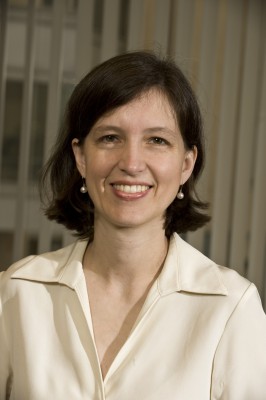