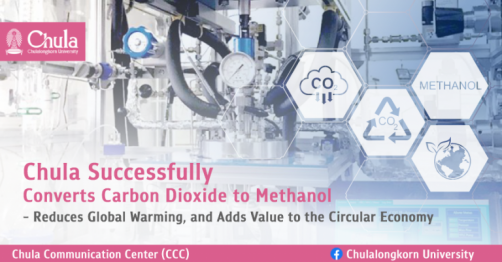 Industrial and household carbon dioxide (CO2) emissions contribute to climate change, global warming, and have a broader impact on biodiversity. It is of global importance that the United Nations is urging all countries to accelerate the cut on greenhouse gas emissions to keep the global average temperature rise not to exceed 2 degrees Celsius.

But in addition to reducing CO2 emissions, researchers around the world are working on ways to bring back carbon dioxide to some use.  For this reason, Assistant Professor Dr. Pattaraporn Kim-Lohsoontorn, Department of Chemical Engineering, Faculty of Engineering, Chulalongkorn University has worked on and successfully converted carbon dioxide to methanol — an important chemical in many industries.

“Most of today’s methanol is synthesized from natural gas, which normally releases carbon dioxide during the production process. We, therefore, studied the production of methanol directly from carbon dioxide, which means that this helps to reduce carbon dioxide and also brings the gas back to some use and increases its economic value as well,” Asst. Dr. Pattaraporn revealed the concept of a sub-research project under the Carbon Dioxide (CO2) Conversion to Higher-Valued Products with support from the “Research Cess Fund” (RCF) from the Malaysia-Thai Joint Authority (MTJA) for the research team from the Faculty of Engineering, Faculty of Science, the Metal and Materials Research Institute Chulalongkorn University, and other institutions to study different technologies and methods to recover carbon dioxide.

Methanol is an important substrate used in chemical production in various industries such as the chemical and synthesis industry, pharmaceutical industry, electrical appliances, and coatings industry, etc. Methanol is therefore a top import chemical of Thailand and tends to increase continuously.

“In general, methanol is synthesized from natural gas by thermochemical method, which produces one ton of methanol and emits about 0.5-1.5 tons of carbon dioxide.” Asst. Prof. Dr. Pattaraporn explained.

“Therefore, we studied how methanol is produced directly from carbon dioxide, which is a promising alternative to the environment and also enhances its economic value.”

Asst. Prof. Dr. Pattaraporn elaborated that methanol can be expanded into a wide range of environmentally friendly green chemical products, such as Dimethyl Ether (DME), used as heating fuel, and Dimethyl Carbonate (DMC), which is used in many industries such as the paint industry, and adhesive industry.  Dimethyl carbonate is used as a binder and is classified as a type of plastic material. It is also mainly used as an electrolyte in lithium-ion batteries used in electric vehicles, which are becoming increasingly in demand.

The thermochemical process to add value to greenhouse gas

For this research, Asst. Dr. Pattaraporn chose the process of thermochemical conversion to convert carbon dioxide in which she used a reactor to generate heat and pressure, then induce a chemical reaction by adding hydrogen to carbon dioxide (CO2 hydrogenation) until it becomes methanol.

However, the thermochemical method demands intensive energy for the reaction and the methanol yield is low. Asst. Prof. Dr. Pattaraporn then finds a way to eliminate this drawback with the use of some alcohol as a catalytic solvent with copper-zinc oxide base catalyst (Cu/ZnO) to increase the methanol yield, and reduce energy consumption in the carbon dioxide conversion process.

Despite the research success, there are still many obstacles, such as the relatively high cost of CO2 capture, energy used in the CO2 conversion process, production costs and sources of hydrogen, market size constraints, and lack of investment incentives. So, if it receives support from the government in terms of policy, cost incentives, taxes, etc, this technology will become more competitive in the future.

“We have a plan to work with the industry sector to push forward the research to provide Thailand with new environmentally friendly products, create economic value for waste, and stimulate a circular economy. This is an important issue to which people today need to pay attention. We must try to save the environmental capital as best as possible to pass it on to the next generation so as to assure them of a better life.” Asst. Prof. Dr. Pattaraporn concluded.